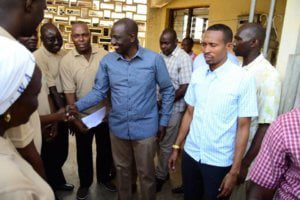 Caption: Nyali Member of Parliament Mohammed Ali and William Ruto at Our Lady of Fatima Parish in Kongowea earlier today where Ruto made yet another donation.

Nyali member of parliament Mohammed Ali was a man loved and adored by many. During his television years he used to fearlessly dive deep into some of the biggest scandals in the country and many people regarded him as the best investigative journalist we had seen in Kenya.

Moha, as he is popularly known, was really passionate about the well being of the common Kenyans and was very vocal on the matters that affected them. His intriguing investigative documentaries unearthed the dark sides of some of the biggest politicians in the country and he often got into trouble for that. Sometimes forcing him to go into hiding.

In 2016, Mohammed Ali declared his interest to get into politics and Kenyans were very pleased with the news. They thought that maybe his entry into this dirty game would the the fresh breath of air that we desperately needed as a country. So Moha went back to his hometown in Nyali and after a long campaign process he was elected and finally got into parliament holding the dreams of many Kenyans even those who weren’t from his constituency.

A few months later, things started to change. Kenyans expressed their displeasure with how close he was getting to the Deputy President – the man almost everyone dislikes. They even took a few photos with Mr Ruto which Mohammed Ali posted on his social media. This short wave of questions slowly died down and Kenyans seemed to have forgotten.

This past week, however, Mohammed Ali caused a storm on social media yet again. His tweet after he and William Ruto commissioned a street lighting project at Kazandani in Nyali sent furious Kenyans talking. The comments section was full of reactionary Kenyans who didn’t look very happy with Moha’s association with Mr Ruto. Some felt that he had already been assimilated into the system and that he had turned out to be one of them. Bringing back to life the conversation that took place in May where Mohammed Ali was reported to have publicly declared his support for Ruto’s presidential bid in 2022.

What happened to the Mohammed Ali that used to host reggae splash on Radio Maisha?? He would articulate the grievances of mwananchi in pain and vigor… The pain in his voice was everything we wanted for a revolution,… CHOKODINDO!

Others thought he was just playing pretence and was only getting close to Ruto so he could learn his crooked ways and expose him. A few people felt that Mohammed Ali was completely in order and there was nothing wrong with a member of parliament welcoming the Deputy President to his constituency to launch projects.

So according to Twitter Democrats , @MohaJichoPevu can’t receive DP Ruto as elected member of parliament for Nyali and DP of the Republic of Kenya to launch street lighting program? A bunch of hypocrites.

As if that tweet hadn’t already caused enough trouble, Moha went ahead and sent another one on Sunday afternoon after attending a church service at Our Lady of Fatima Parish in Kongowea. In the tweet he went on to say that “On behalf of the church, we thank the Deputy president for his generous contribution of Ksh 5m towards expansion of the church (2m in cash today and 3m to be added during the November mega fundraiser).
We will continue preaching the message of hope and unity to our people for a united prosperous Nyali.”

It will definitely be interesting to see how these events turn out but one thing is for sure, Mohammed Ali has let down thousands of Kenyans who had put in so much faith in him.