Residents of Nandi County are an unhappy lot after one Managing Director of Kapsabet Nandi Water and Sanitation Company Limited (KANAWASCO) Mr. Anthony Kiboiy has been fleecing the company by getting double salary from the County government of Nandi and the water firm.

Here below is their urgent grievance:

Please help us inform Ethics and Anti-Corruption Commission (EACC), the governor Nandi and senator about the pilferage of public resources happening at Kapsabet Nandi Water and Sanitation Company Limited (KANAWASCO).

According to the Water Act 2016, the water sector is fully devolved and is owned by the County Government of Nandi. The acting Managing Director (MD) Anthony Kiboiy is seconded from the County government. He earns a salary from the county government together with an acting allowance for the position. However, he also earns a second salary from the company of over 100,000 per month plus other benefits such as airtime allowance and his car is fueled by the company.

Auditors from Kenyan National Audit Office (KENAO) in Eldoret raised queries on this issue, of double payment but they were paid off.

He has employed his son in law Micah Kipleting as an ICT officer on permanent basis despite him being a graduate of environmental science from Maseno University and no certification or experience in IT.

The post was not advertised and the employment was done in secret.

His sister Rosario Jebotip is the Head of Procurement in the company in total disregard to the conflict of interest and nepotism.

They fleece Wananchi by tampering with the billing system and the cash collected by the son in law is shared with the MD.

The grievances raised against this man don’t see the light of day as he is friends with the county secretary Dr. Francis Sang who protects him from any impending transfers or backlash are ‘well connected’ cartels.

The low level employees like the plumbers earn Ksh18,000; do the bulk of the work and are disgruntled.

We as residents are asking for an immediate forensic audit and investigation by EACC and return of salaries paid illegally.

Attached are copy of audit, query, conversations from a WhatsApp group Nandi free mind where the same issue was discussed.

Also, both payslips from the county and the company. 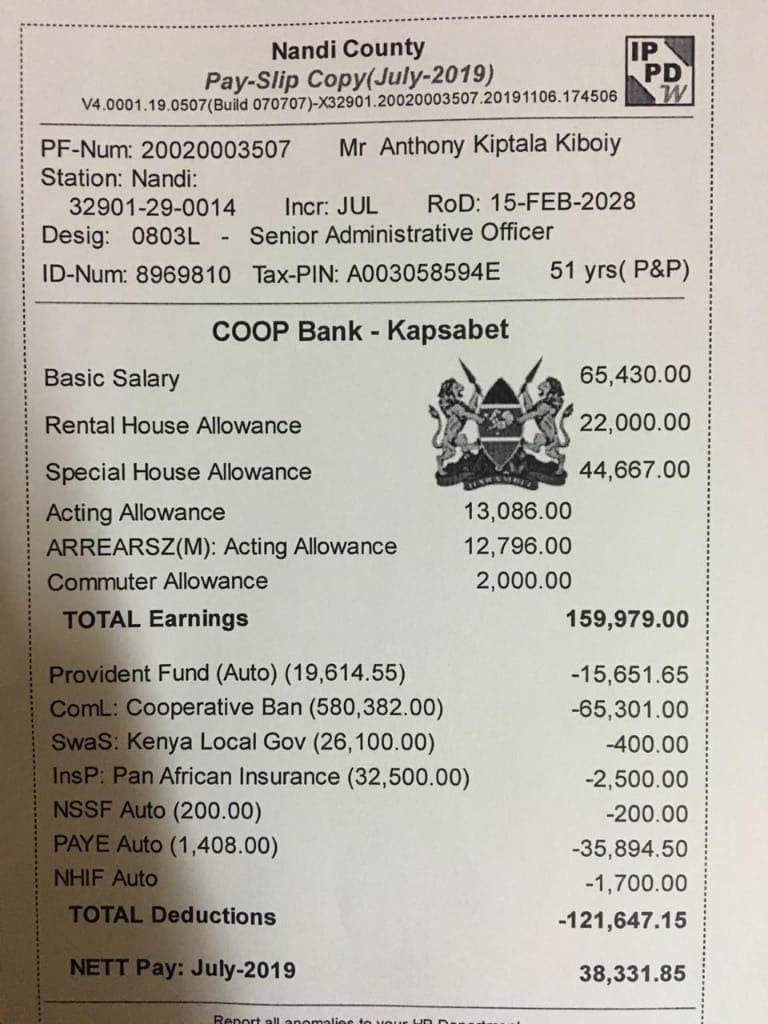 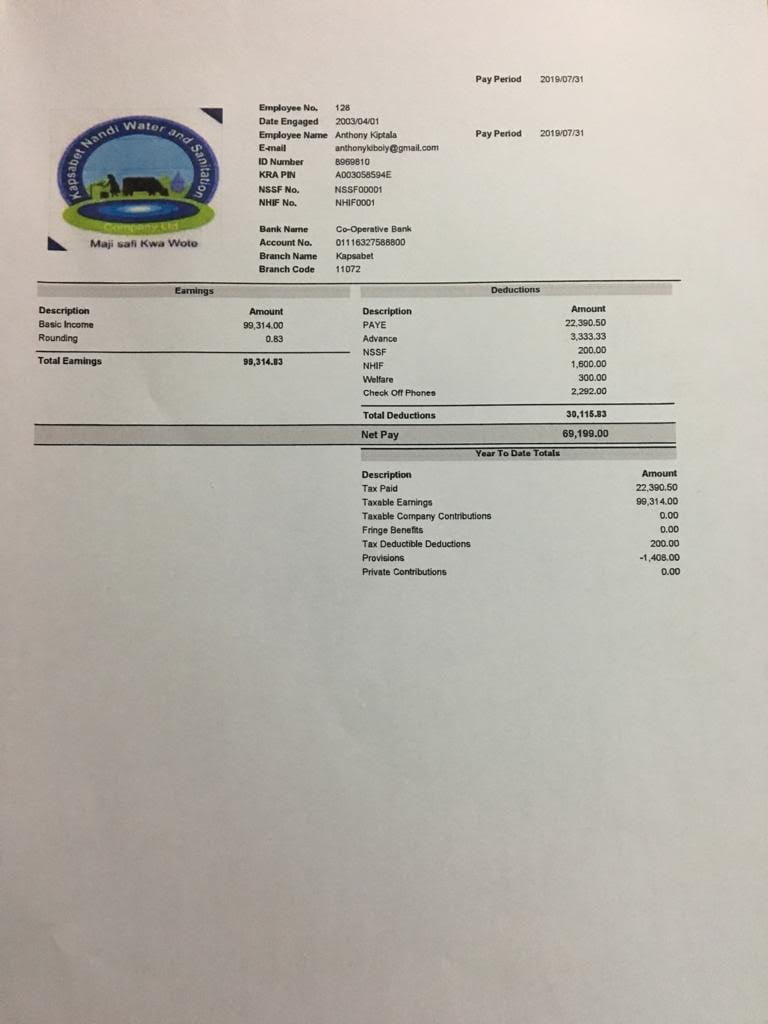 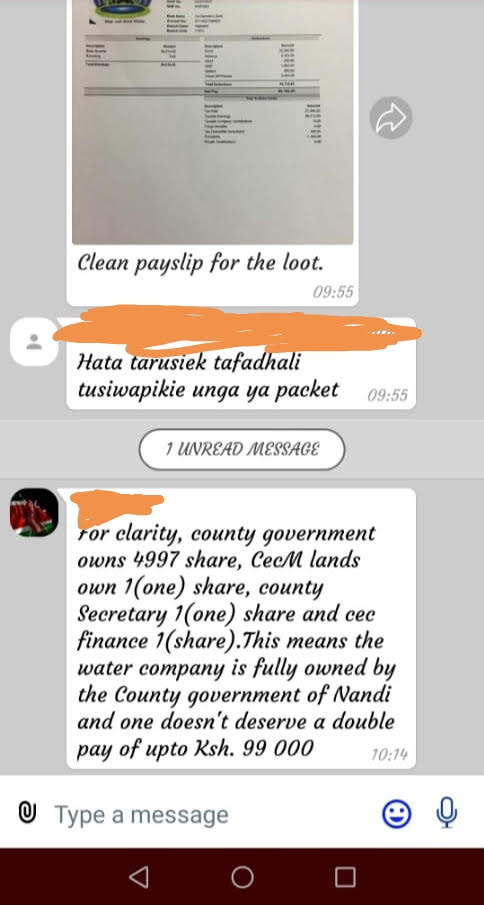 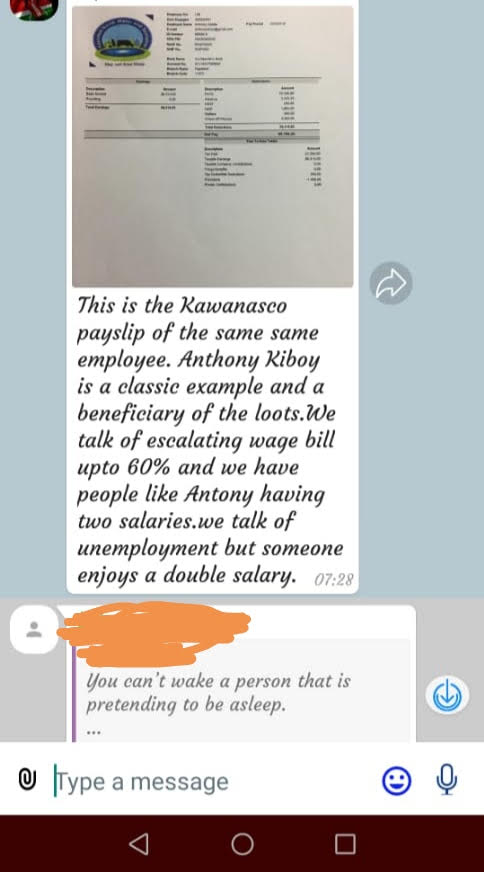 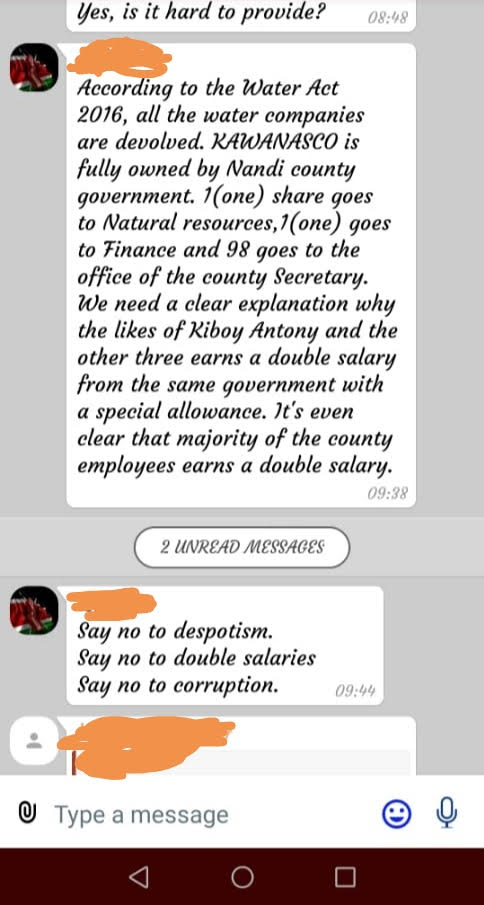