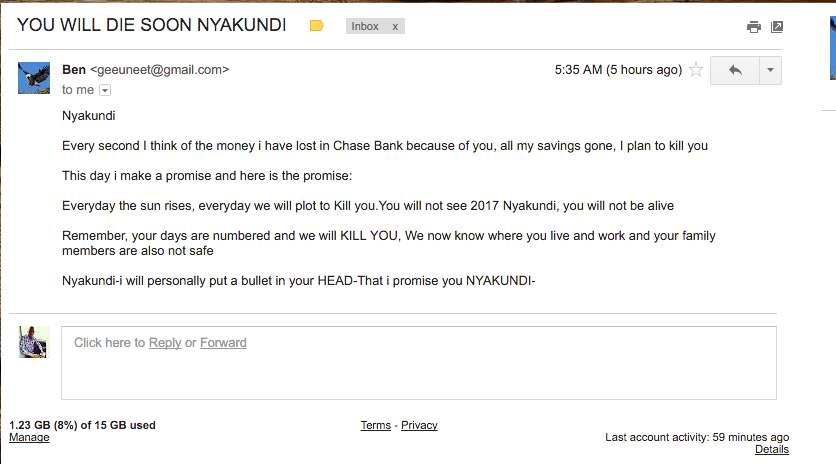 Caption: Un-called for death threats against Cyprian Nyakundi who was only doing the work of God.

Some detractors from the cause of a fair and just society seem to believe narratives being peddled by Julie Gichuru, Carol Radull and Terryanne Chebet who are on the payroll of Chase Bank, to divert public attention from the fact that Directors of the collapsed financial institution loaned themselves billions without security.

People should learn to channel their anger towards the right people, not those who are in the struggle with them. Threatening to kill Nyakundi yet he is not the one who has Chase Bank’s missing 16.6 Billion in his account is folly, and the work of directors of the fraudulent bank.

What Cyprian Nyakundi did was simply ask individuals to withdraw their money, because it was too painful to watch the TV interview by Jeff Koinange whereby depositors at Imperial Bank elaborated the problems they faced after the bank was closed. Their story moved us to tears.

We have seen that nobody at Imperial Bank has been arrested so far, and the Inspector General of Police recently issued arrest warrants that haven’t been executed, largely for publicity purposes. Kenya is a rigged system that favours the high and might, without any consideration for the ordinary mwananchi.

We have to be our brothers keepers. On Wednesday 6th April 2016, clients at Chase Bank withdrew a whopping Kshs. 7.1 Billion, money that would have gotten lost at the hands of the Deposit Protection Funds who in many instances never refund money from banks under receivership.

It’s your money Kenyans. Why should you allow some media operatives on payroll of corrupt banking frauds to tell you what to do with it? The moment your instinct tells you something is wrong, waste no time. You’d be better off stashing the money under your matress instead of willingly giving it away to a bunch of corporate thugs.

Money matters are not to be joked around with. If you have millions in your account and you make Business Daily and Citizen Business News your ONLY source of information, clearly 8-4-4 fucked your brains harder than you know. Open your mind to research and listen to your instinct more. Don’t be herded like cows to a slaughter-house.

There is a Chase Bank which has been graffiti’d by customers who may have not read this blog on time. They have sworn to nail Chase Bank directors. While we will do our best to unmask the names, properties of Chase Bank/TransCentury Group directors, it’s time we channel that energy to revolt against an unbecoming Government. 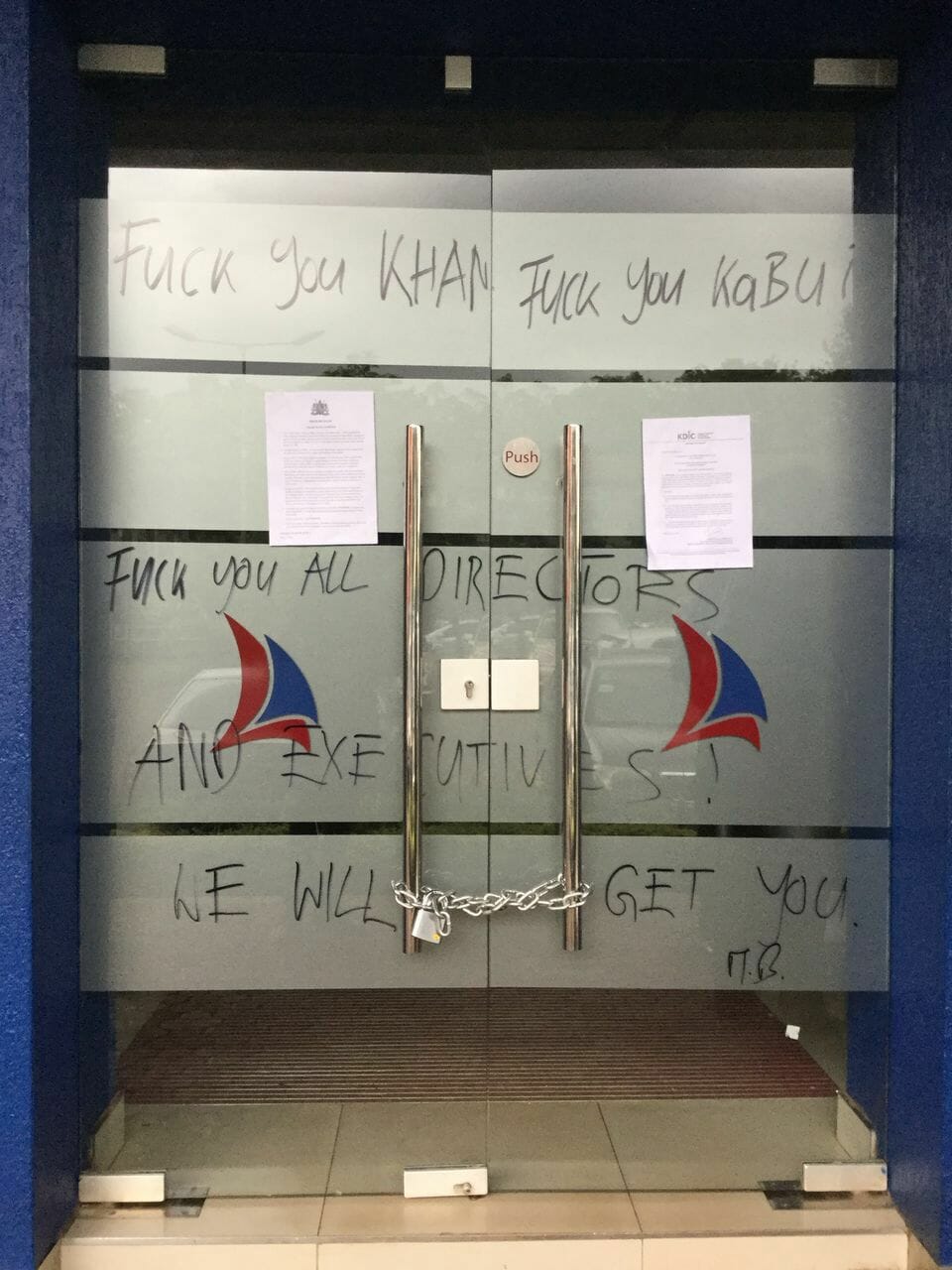 Caption: Warnings to Chase Bank Directors. We will work overtime to unmask their names and investments.

Let the spirit of revolt reign. There is no way Rafiki DTM can cap customer withdrawals yet people are withdrawing  their own money. How do you tell me how much of my money I can or cannot withdraw? Don’t you see that we tolerate a lot of bullshit as Kenyans?

I was happy when I heard that customers held a Rafiki DTM branch hostage. That’s the spirit we need. These ruling/corporate class citizens mistake our kindness for weakness and it’s time we show that this is our boiling point.

Corruption is dangerous and doesn’t even spare the high and mighty as it has come to our attention that Kshs. 300 Million of the UN Staff Workers Sacco has gone missing. They have been “assured” that it will be recovered but we all know that it’s a lie. Probably the Sacco officials who instigated a resolution to have Chase as their official bank, were in on it from the beginning. 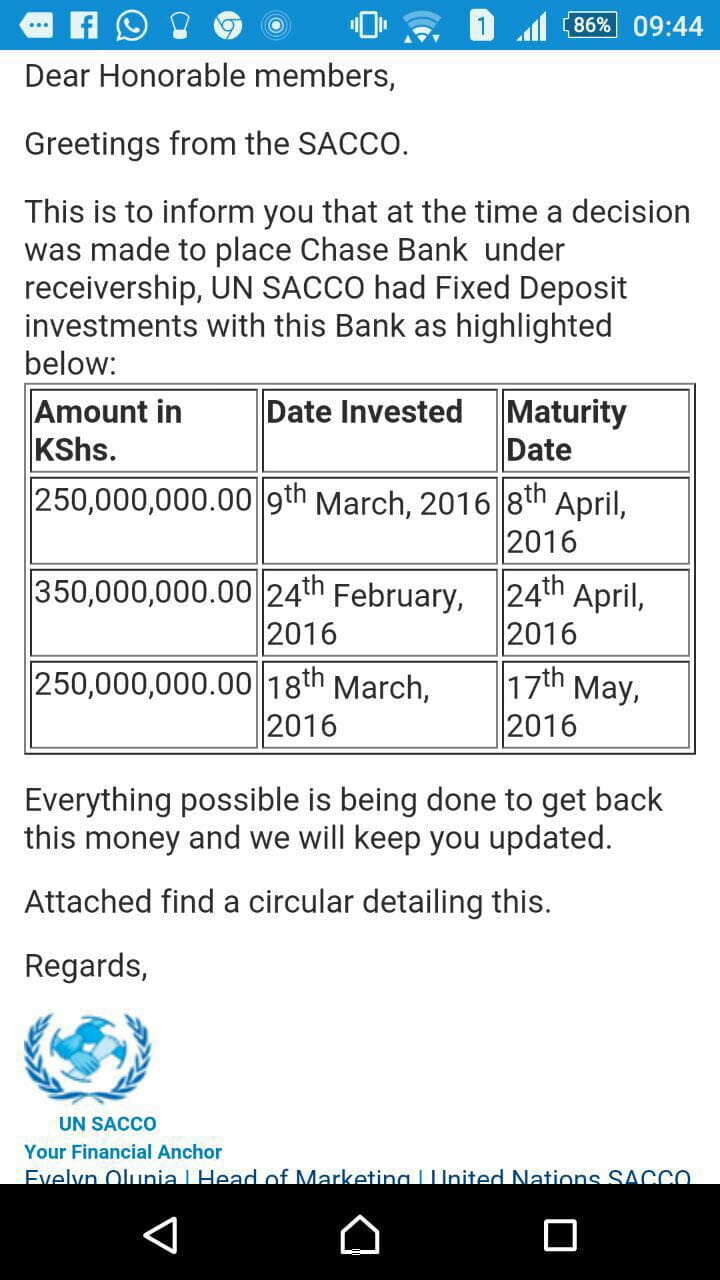 Caption: Advisory by UN staff Sacco showing the magnitude of Chase Bank’s crisis on the economy.

We now would like to make it clear to UN staff that your money is lost forever. Don’t believe what your Sacco told you.

Changing Kenya starts with you, now more than ever.