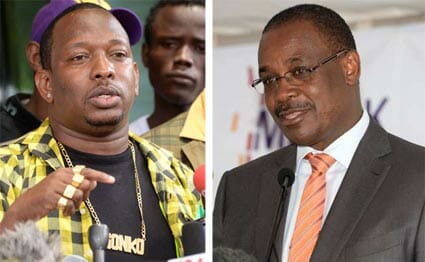 Nairobi – Nairobi Governor Evans Kidero has been officially sued by Senator Mike Mbuvi Sonko after he failed to apologize for comments terming him a drug dealer.

Sonko had given Kidero 7 days to apologize for his comments but Kidero has yet to, thus the application by Sonko as a matter of urgency.

Sonko says that by Kidero not apologizing, his reputation has no doubt suffered and thus he wants the Governor punished for his actions.

” The defendants jointly and severally have over the past few weeks engaged in a smear campaign against the plaintiff and have made defamatory, slanderous and scandalous allegations without any reasonable justification,” his lawyer Danson Mungatana said Wednesday.

Kidero had said that Sonko’s Rescue Team had taken advantage of their ability to be able to roam the city, to instead transport drugs.

” The allegations are that the plaintiff is a drug peddler using his ambulances and hearses to supply drugs to slums,” Mungatana added.

Kidero had earlier said that he would not apologize for the comments, as they were the truth.

” I believe that any person who heard Dr Kidero speak during the function at Mathare could easily have connected the same newspaper report with a intention to destroy our young generation instead of providing them with mentorship and socio-economic empowerment,” Sonko further stated.

The preliminary hearing is set for next week after all parties enjoined in the suit are filed with the relevant papers.