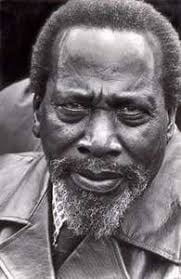 Jomo Kenyatta (Johnston Kamau Ngegi) was an ugly man whose name and face should be removed from our country’s monuments, airports, roads, buildings and currency using sulphuric acid. He was not just ugly physically; he was morally ugly: he murdered our greatest visionaries, repressed and plundered Kenya.

Jomo Kenyatta returned to Kenya from Britain penniless after 15 years of working as a gardener in Scotland. When he became Kenya’s PM in 1963, he had no vehicle, house or land. But within 15 years, he had stolen land the size of Coast Province and become Africa’s richest man through looting.

Had the UGLY Jomo Kenyatta not murdered Pio Pinto Gama, Argwings Kodhek, Thomas Joseph Mboya and JM Kariuki – visionaries of their time – our country would have had a chance of becoming a first world in the 20th century. He introduced murder, tribalism and looting in politics.