Andrés Manuel López Obrador the President of Mexico has proposed the removal of diplomatic immunity from U.S. agents in the country. 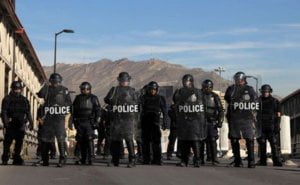 US troops patroll at the US-Mexico border (Photo/AP)

If unanimously approved, the proposal will require Drug Enforcement Administration (DEA) agents to give all information they collect in Mexico to the Mexican government.

Also, the Mexican President wants US Agents to submit reports by any government officials contacted by the agency to Mexico’s Foreign Relations Department.

“The proposal is that foreign agents will not have any immunity,” says a summary published by the Mexican Senate.

The Associated Press noted that DEA agents are afforded full or limited immunity in most countries.

The AP reported that information leaks in Mexico are common and well documented, including a 2017 incident where a commander of a Mexican police unit gave DEA information to the Beltran Leyva drug cartel for millions of dollars.

Cienfuegos was arrested in October on drug-related corruption charges. His arrest aggravated U.S.-Mexico relations, with Mexican officials saying the incident had damaged trust between the two nations.

Explaining their move to dismiss the charges, U.S. prosecutors said “sensitive and important foreign policy considerations” had taken precedence over the U.S. government’s decision to pursue charges against Cienfuegos.

Cienfuegos is expected to return home to Mexico without facing any charges there.

Mexican officials have, after Cienfuegos’s case was dismissed, announced plans to no longer allow government officials to be extradited and tried in the U.S. on corruption charges.