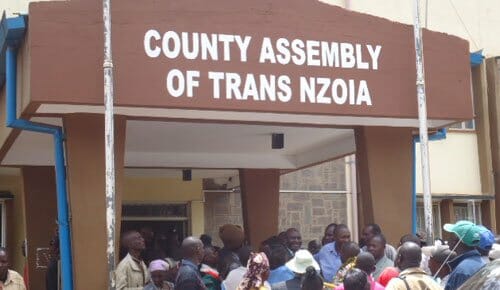 Civil servants in Trans Nzoia county have raised concern over the manner in which Cherangany subcounty administrator is frustrating them on their allowances during the county government public functions.
The civil servants drawn from several cadres said the officer has been pocketing their allowances and accused her of forgetting that all were civil servants in the county government who should be treated equally in terms of their allowances. The officer is being accused of not remitting duty allowances to officers as it ought to be when public functions take place in her county yet the same is factored and budgeted for.
Civil servants who included ward administrators, liaison officers among other officers miss to accompany Governor Patrick Khaemba in functions and more than 20 drivers have been missing their allowances in other county government functions as someone pockets allowances budgeted for them.
One such incident was last month when Khaemba went to resolve land title deed matters for farms whose owners did not have the vital document. A six minute drama unfolded with a number of officers confronting her and rejecting their allowances which she allegedly slashed. “Wewe mama uko na tabia mbaya sana ya kutukulia. Hii pesa ilibajetiwa Kaunti unasikia,baki nayo’’ (you woman you have bad manners and tendency of eating from our allowances. This money is from the county and it was budgeted for. Have you heard? Remain with it), they said.
Other officers in Khaemba team rejected to take the offer of Sh500 saying they were entitled to get Sh1000 each. Drivers also protested when they were told to sign for Sh300 each. They branded the officer as disrespectful to her colleagues for deducting allowances made for them. Her colleagues said she should understand that she is now working in the county government and not the provisional administration.
A local politician, Kiprotich Etiang who witnessed the six-minute drama said the subcounty administrator has caused more harm than good to Governor Khaemba administration since she resumed office five months ago and further accused her of crossing swords with other officials including MCAs, NGOs and the clergy.
Residents now want the governor to have her transferred to another docket or have her demoted for indiscipline and lack of decorum in line with chapter six of the leadership and integrity as constituted.
We could not however get any comment from the officer over the incident. Incidents such as this have happened in the county before and it is not an isolated case. County executive in charge of lands Elizabeth Nyongesa had to intervene outside the county government building and asked the officer why she was denying members of county staff allowances they were entitled to. This happened three weeks after the governor had gone to Endebess constituency on land matters where his driver was denied his allowance by the officer.
It is not only in the counties where allowances are halved, at the Office of the President’s Harambee House, clerks at the salaries department are said to be sitting on allowances of DCs, DOs and chiefs across Kenya until one parts with a bribe. The names and dealings of the OP cartel to be exposed here.

In this article:Tranz Nzoia County politics