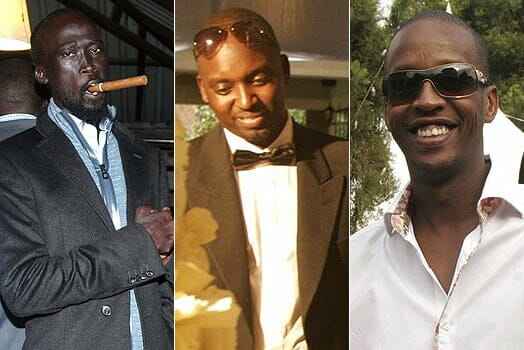 During the requiem service for the late Fidel Castro Odinga at the All Saints Cathedral last week, his younger brother , Raila Odinga Jnr told the congregation that Fidel loved his toys, which included sleek cars and licensed firearms.

This elicited laughter from the congregation but what they didn’t know was the depth of that statement.

With a palatial home in the leafy suburbs of Karen, Fidel had a wide range of vehicles, most of them sports utility vehicles. If one can afford such a lifestyle, the only other thing to possess would be a firearm to protect yourself and your belongings.

This has become the trend for many young Kenyans Fidel’s age roughly between 30 and 40 years, mostly sons of politicians, successful celebrities and rich businessmen.

What is interesting is the fact that these relatively young heavy spenders have formed a tightly knit network among themselves that transcends tribe and could loosely be described to hinge more on class than anything else.

Most of them only “hang out” with each other on a regular basis, blocking anyone who does not fit in or belong to the same class regardless of tribe or religion. To fit in, you must be from a similar social and economic stratum.

But how heavily do they splurge and where do they spend the money?

The answers can be found in high-end clubs in Nairobi and other major urban centres across the country.

Other than the Capital Club, which is a members-only club, other venues they frequent regularly include Ebony Lounge, Skyluxx (VIP) Lounge, Mercury Club (ABC Place), Havana Club, Sohos, Vineyard and Cedars Restaurant among others.

In these clubs, the average cost of a bottle of Hennessy, Martell, Remy Martin, Glenfiddich or Johnnie Walker brands like the Black Label, Gold Reserve and the Blue Label is anything between Sh10,000 and Sh30,000.

“An average of three to four bottles would be drunk on a night out,” says one of the club managers, who requested anonymity.

“These people are big spenders, they always reserve tables and they spend heavily. In one evening, they would spend anything between Sh60,000 to Sh150,000, depending on how many they are.”

Others include James Karanja, popularly known as Jaymo Keroche (son of Keroche Breweries CEO Tabitha Karanja) and John Malogo, a popular young Nairobi businessman, among others.

According to Amor Thige, the proprietor of Ebony and Skyluxx lounges, this group does not stay in one club during a night out.

“In one sitting only they spend anything between Sh20,000 to Sh40,000. Now you can imagine how much they would spend if they went to four or five different joints in one night,” says Amor.

However, most of these heavy spenders don’t like frequenting clubs where there is the attendant risk of loss of privacy, especially when they want to avoid paparazzis.

They prefer private parties in the leafy suburbs, says Morris Kihang’u, who has previously organised some of these parties.

“Almost every weekend, there is a private party in Lavington, Kileleshwa, Karen, Gigiri, Westlands and so on,” says Morris.

He adds: “If they haven’t organised their own events, they target outdoor events like the Rhino Charge, Lewa Marathon or Safari Rally, among others, where they bring out their big toys (read SUVs) as well as women to accompany them and a wide variety of expensive liquor.

“I remember attending one of the recent Lewa Marathons with John Malogo and his very close friends where we spent over Sh300,000 on drinks only in one weekend.”

Malogo, popularly known as Johnny Subru, owns the Subru Motors car yard, located at Lavington Green Centre in Lavington. Only in his early 30s, Malogo is also known to own a hangar at the Wilson airport, with several light aircrafts.

According to Amor, some of these men take advantage when one is paying dowry or having a wedding out of town.

“This is when they drive their expensive cars out of town and spend as much as they want,” he says.

“Last weekend in Kisumu, there were chartered flights, big cars driven to Kisumu and onwards to Bondo as well as lots of cash spent as they bid farewell to Fidel.”

Then with all this comes the issue of firearms. For a civilian to own a firearm, they must have a license.

While most people acquire the licensed firearms for prestige, some insist they are for self-defense.

“We are not even supposed to enter the club with a gun, but most clubs have safes where they store them,” says Malik Buddy, a music promoter and entrepreneur in Nairobi, who is also a licensed firearm owner.

“Unfortunately of late, people have been misusing this privilege, which is really bad for the rest of us who are law abiding citizens.”

And where does the money come from? Mike Gumo, son of politician Fred Gumo, who is also a part of this group says that he works hard to afford a lavish lifestyle.

“I know I spend a lot of cash during my nights out but I work hard at the end of the day and avoid depending on my parents,” he says, adding that he is a partner in a motor vehicle importing company and also works in his family’s real estate business.

Fidel had invested in petroleum and real estate, and owned an office block in Kilimani Estate in Nairobi.

Most of the group members have invested in their own right as well as participating in managing the family affairs.

Sources say that Mabior Garang is in Kenya to take care of the family’s businesses since his mother Rebecca Garang is based in Juba where she spends most of her time.