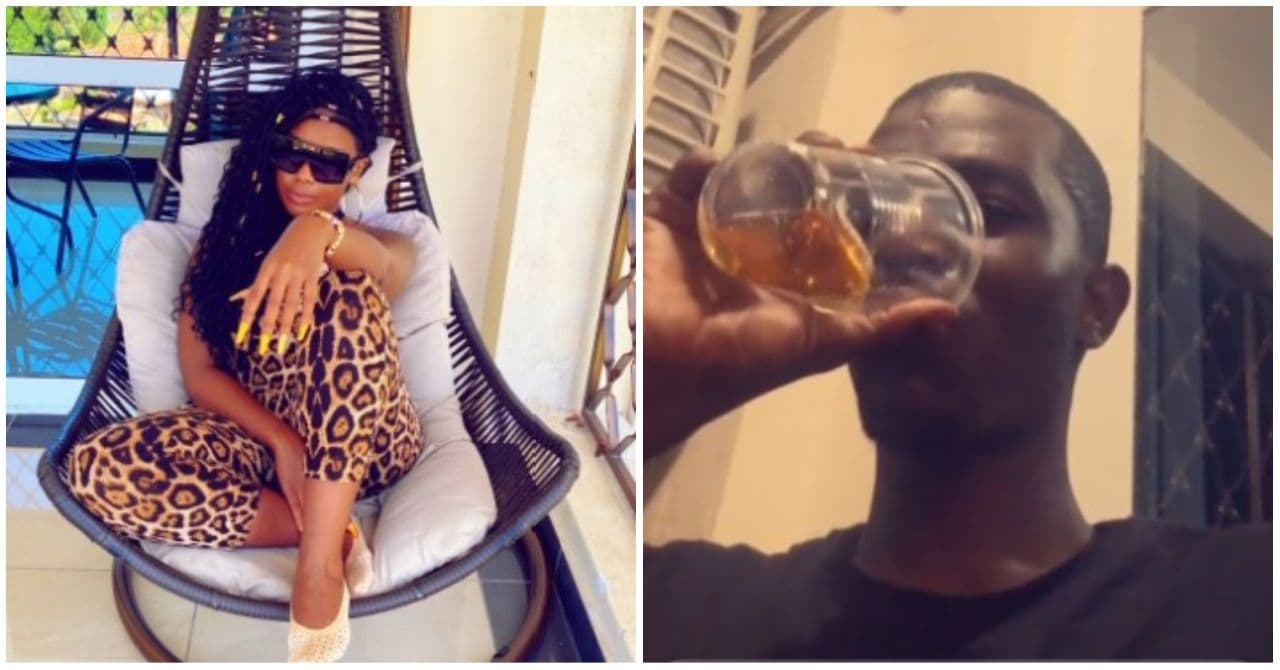 As some chose to spend time with friends and family and share in the joy of Christ’s birth during 2020’s extraordinary festive season, to Instagram socialites across the globe, it was yet another opportunity for pointless showoff and never-ending faceoff for likes, views and comments.

Back at home, the case was hardly any different; only that, as some of the world’s sexiest upper crusters shared snaps being flown out in private jets to top global destinations, most of our overhyped local bimbos only got to enjoy an 18-minute drive to watch malnourished lions and zebras in the park just behind the city, given that many of their sponyos are stuck with their wives and kids within the country.

It was, however, not all gloom and doom for our local birds as a few lucky of them, like wannabe media personality Teresia Ndoti Wambui, better known within the entertainment scene as “Kush Tracey”, got a chance to get out of town and wind down the year away from Nairobi’s hustle and bustle.

Through her social media pages, the former rapper who jumped ship from her failed music career and hang on to some TV hosting job at a low-tier githeri station documented her Christmas getaway trip to the coastal town of Mombasa with all sorts of corny captions and hashtags which clearly projected she was not very acquainted with flying business class.

Ever since her breakup with secular artiste Timothy Owuor alias Timmy TDat 4 years ago, Kush Tracy took every socialite’s favourite turn after being dumped and began the journey to rebrand herself as a “self-made” and “independent” woman — a deceptive facade which only clueless teenagers could possibly fall for.

As nature has it, truth always reveals itself, no matter how perfect the guise might seem; and as advocates and selfless agents of truth, we here at cnyakundi.com can comprehensively confirm that Wambui’s excursion to the coast was actually not a ‘solo’ trip as portrayed on her IG posts, but in fact, a Christmas vacation fully paid for by a married Texan summer bunny by the name Kevin Omindo.

Through our source whom we shall keep anonymous for obvious reasons, it is understood that Mr. Kevin Omindo who tied the knot with his wife Violet Chochea in Texas, left her and the kids in the United States and visited Kenya to attend the burial ceremony of his sister.

After the funeral, Omindo dropped down to his fully furnished apartment in the coast where he invited Kush Tracey and footed all her travel bills. 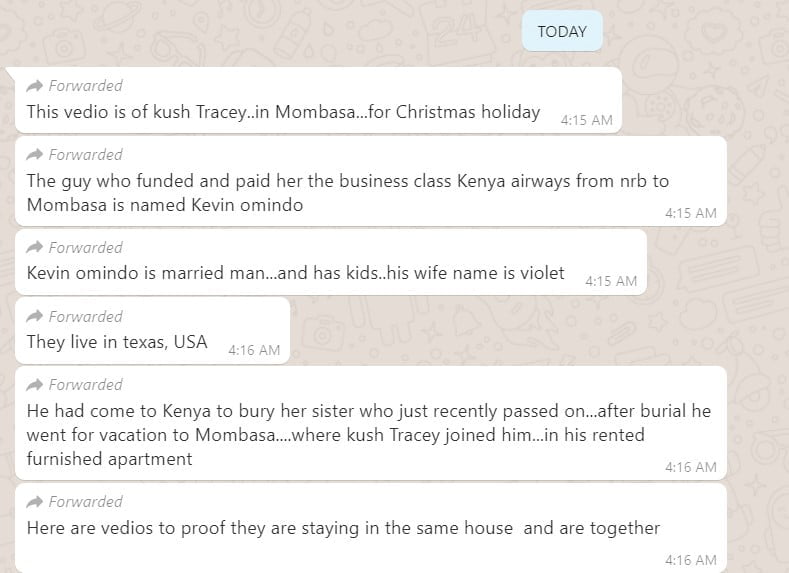 CAPTION: Kevin Omindo enjoys a drink inside his Mombasa apartment as shared on his Instagram page

Omindo’s wife, Violet, graduated with a Masters in Public Health at the University of Texas in Arlington just a distance from Melissa City where they have been living ever since they got married in 2013.

CAPTION: Excerpt from the Texas Marriage Listings in 2013 confirming Omindo is married to Violet

Kush Tracey and the entrenched, glorified hoe culture in Kenya 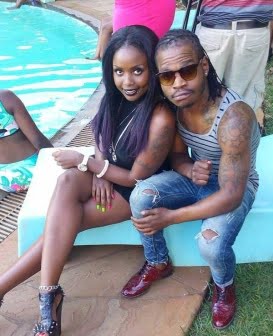 Following their club brawl at popular entertainment joint 1824 and subsequent breakup in 2016, a broken-hearted Timmy went on to narrate the ordeal that separated the two, revealing that on that fateful night, Kush Tracey, who in the past claimed to have lost her virginity at 19, later joined up with a politician at the same club.

Timmy added that he knew they (Kush and the politician) had a thing before they started dating but she had convinced him the affair was over, prompting him to declare her his woman.

Confirming that he had lost his heartthrob for Kush Tracey, Timmy said he called the politician and the two had agreed to remain friends.

This story not only exposes Teresia Ndoti Wambui’s fake lifestyle and the lengths she is willing to take just to keep it afloat but also confirms the sad fact that “Hoe Culture” – a term to describe the rise in and encouragement of sexual promiscuity in women – is deeply entrenched in Kenya.

This is most prevalent on social media, where women like Kush Tracey and her fellow socialites are basically prostitutes, but it can also be seen more subtly in other forms of media like TV and radio.

Today it seems like there is an overabundance of hoes, aspiring hoes, and wanna be hoes. 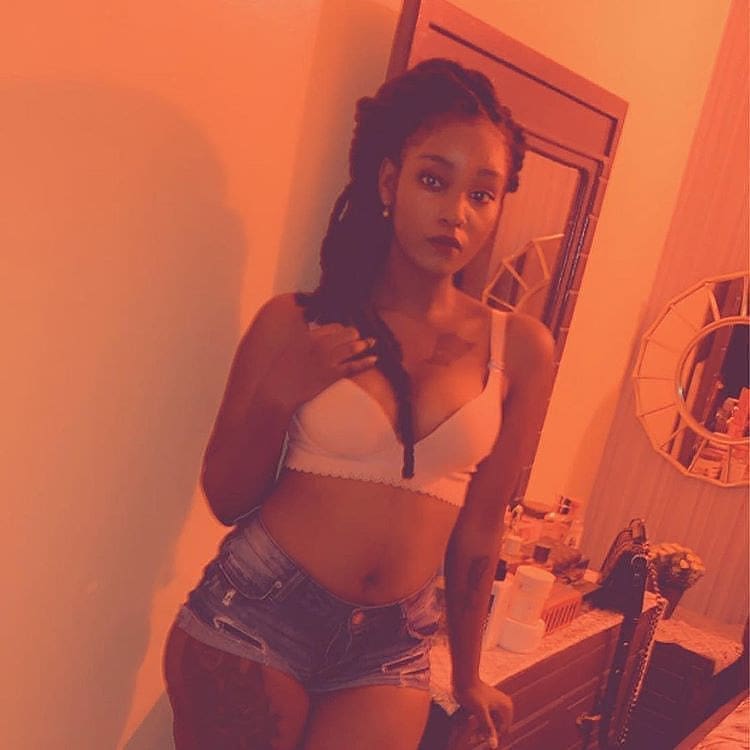 Upcoming Teen Socialite Shakila: At just 19 years, she already acquainted herself with more than half of Kilimani’s bedrooms

Like this site’s Chief Editor once opined on this blog when a bunch of bimbos got invited to Uhuru Kenyatta’s State House in 2018, one spin-off effect of such an unfortunate crisis is that through Facebook, Tik-Tok and Instagram, these hoes taint the minds of other girls who develop such traits because they have seen clear/tangible returns of not working hard.

To me, a whore is the lowest level of the Feminine; she takes one of the most powerful tools that she has as a woman, her sexuality, and treats it as a public marketplace, trading her essence for material objects.

Yes, you are an adult and you can make your own decisions. Yes, your body, your choice.

However, as an adult who is fully capable of making your own decisions, you are also expected to be fully equipped to deal with the consequences of those decisions.

With Hoe Culture being more embraced in Kenya now more than ever, I am personally most concerned for the children.

Children are sponges. They absorb everything. They are always paying attention, even when you think they’re too young to know what’s going on.

Naturally, girls look to the women around them as a model of who and what they are supposed to be, after all, it’s not like they can choose their own environment at that young age.

They are subjected to whatever the adults in their lives expose them to. So they get what they get and that becomes their foundation.

If a child grows up around girls like Shakila that’s what they will think is acceptable and they will see it as something to strive for.

How then do you convince such a child that she can be a submissive wife and productive participant in nation-building when all she has to do is lay on her back, get fucked laugh all the way to the bank?