Mbadi said ODM has 31 MCAs who should throw their weight behind the motion sponsored by the party.

“We have resolved unequivocally that Obado will have to leave office, and this impeachment motion has the blessing of Raila unlike what others have been saying,” he said.

The motion that has aborted twice will be tabled next week.

The ODM chairman spoke at Maranatha grounds in Migori town he was meeting of over 600 delegates, elected, and opinion leaders to drum up support for the motion aiming to impeach Obado.

“The motion is about people of Migori, we have MCAs from other parties and independent ticket who are supporting the motion while we still have ODM MCAs afraid of their own shadows,” Mbadi said.

While Mbadi’s meeting was on, Obado was having special prayers at  Lwanda Rapogi church in his village.

Mbadi who comes from Homa Bay county said the impeachment of Migori must succeed then it will roll over to other on ODM governors charged with corruption and barred from the office. 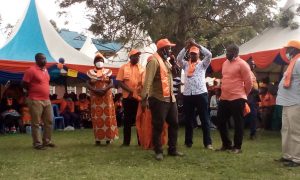 Senator Ochilo Ayacko who also addressed the meeting said Migori has received more than Sh42 billion that it can not trace.
He further instructed Bukira East MCA Mathews Chacha and Deputy Speaker and South Sakwa MCA Kevin Ouma and Majority Leader to ensure the motion goes through.
“This impeachment motion will be to help MCAs stand up among residents and point out where delayed bursaries, local projects and employment opportunities they have been missing are,” Ayacko said.
Would you like to get published on this Popular Blog? You can now email Cyprian Nyakundi any breaking news, Exposes, story ideas, human interest articles or interesting videos on: [email protected] Videos and pictures can be sent to +254 710 280 973 on WhatsApp, Signal and Telegram.