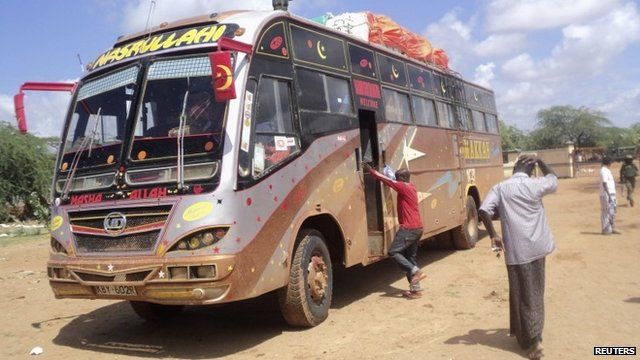 Mandera County has suffered a series of terror attacks blamed on Al Shabaab in the recent past, including attacks on passengers.

About eight travellers are feared dead after suspected Al-Shabaab gunmen attacked a Mandera-bound bus on Friday, December 6, between Wargadud and Kutulo areas.

In a report by local publication Capital FM, police in the area confirmed the number of dead at ten, with a further report expected from the police spokesperson Charles Owino.

“We have had an incident on a Mandera-bound bus that was attacked by a criminal gang and we believe lives are lost. We have dispatched a team of officers to the scene. We will be issuing a statement shortly.”

However, a report by NTV placed the number of the dead at 8 claiming that the gunmen separated the passengers into two groups before opening fire on them.

Police officers in the area are currently pursuing the gunmen.

The attack brings back memories of a November 2014 attack on passengers aboard a bus that was hijacked 50km from Mandera where 28 were killed in what the police described as a retaliation to the raids by police on mosques in Mombasa.

The horrific massacre saw passengers separated by faith and those who did not profess the attackers’ faith were killed.

In a subsequent attack, again on a Mandera-bound bus in December 2015, Muslim passengers showed bravery by shielding non-Muslim passengers from the attackers who had attempted to replicate the previous year’s massacre.

Two people were killed in the 2015 incident.

The Northern Kenya region has experienced sporadic attacks by insurgents associated with the al-Qaeda allied al-Shabaab militant group with grenade attacks on police vehicles being one of their chosen mode of attack.

Kenya’s incursion into Somalia under Operation Linda Nchi on October 16, 2011, is often cited as one of the decisions that increased attacks by the militants on Kenya.

However, the Kenyan government has consistently rubbished such claims in an operation that would later be merged with the African Union Mission to Somalia (Amisom) in 2012.