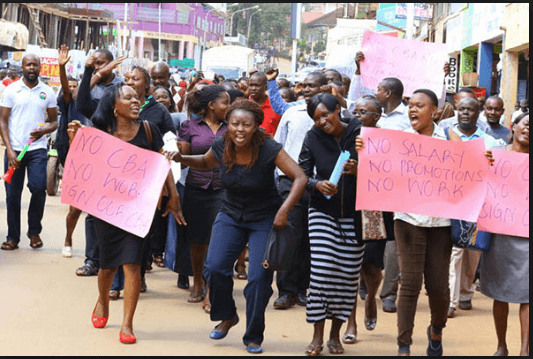 Kenyans in a recent protest

More than 33 employees of a Malindi hotel have staged a go-slow after the management failed to release their three-month salary. The employees of Pine Court Hotel are demanding More than sh. 1.8 million for work they have done for the three months.

The aggrieved employees took to the media after several attempts to solve the matter with the Malindi labour office and the Tourism Regulatory Authority failed to bear fruit. They also revealed that suppliers had also not been paid and they were demanding more than two million shillings from the hotel management.

The hotel they said has 46 self-contained suits that are charged at the rate of between Sh. 4,000 to Sh. 6,000 per night on bed and breakfast and is always full to capacity. The Malindi Water and Sewerage Company (MAWASCO) disconnected water supply to the hotel over an Sh. 400,000 bill forcing the Managing Director Arnold Mwema to dig a borehole that now supplies water to the premises.

“Our efforts are never appreciated and as at now we have not been paid for three months,” said an employee who sought anonymity for fear of being punished by her employer.

The senior employee said that by Monday morning only one employee working in the front office department turned up for work with the rest having skipped duty over the salary issue.

“We have bills to pay ranging from rent, school fees, fare to and from work and many other bills but our employer does not want to listen to us,” he added.

He added that suppliers have avoided any business with the hotel.

“We even fear picking strange phone calls because they might be originating from frustrated suppliers and we are now forced to go physically to markets and stores for supplies but on hard cash,” he added.

Employees said that the premises also have offices for rent and the management collects more than Sh. 2,275,947 at every quarter of the year.
Among institutions that have rented office space at pine court hotel is the Ethics and Anti Corruption Commission (EACC).

“The salary issue almost tore apart my family because my wife could not understand that I had not been paid and my children are out of school as we talk due to lack of school fees,” said a sacked employee.

The workers now want the ministry of labour to intervene so that they can get their salary arrears. When contacted the MD Anorld Mwema said that the grievances were being addressed by the relevant department.

“As we speak the matter is being handled and there is no need to publish such information in the media,” he said.

He added that the employees carried out an illegal go slow and hence had violated employment regulations.

“They woke up one morning and decided not to report to work and this is a gross violation of the employment code,” he said.