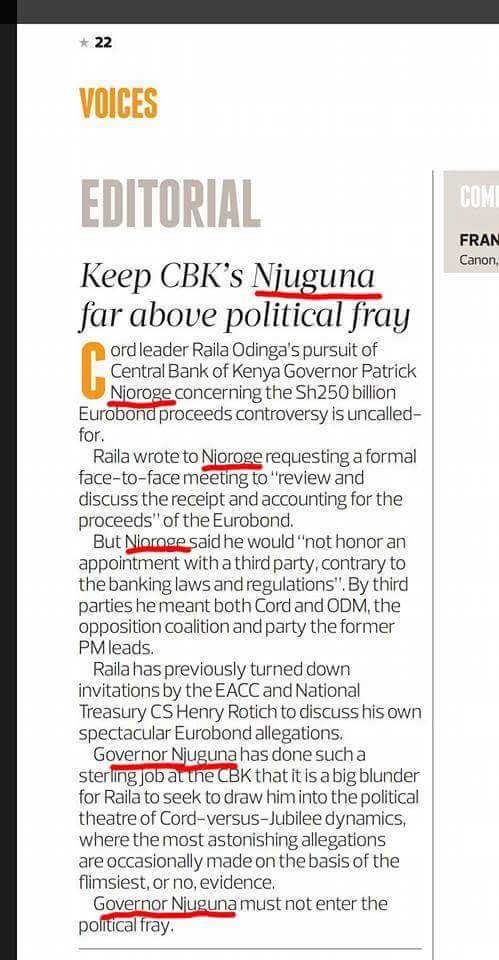 The Jubilee regime has planted moles in mainstream media houses to keep manipulating the image of success and portray the incompetent coalition in positive light, despite glaring weaknesses and blunders that have come to characterise President Uhuru Kenyatta’s tenure.

A simple request for an audience by CORD Leader Raila Odinga to Central Bank Governor Patrick Njoroge, in order to seek clarity over the Eurobond Heist, where Kshs. 100 Billion cannot be accounted for, has turned into a political debate.

Raila is not asking Eurobond questions on behalf of CORD but on behalf of Kenyans and he should be given the respect he deserves. He needs a hearing on this or any other matter of public interest.

If Patrick Njoroge was as “efficient” as mainstream media is claiming, he should have detected Chase Bank’s anomalies with its books and insider-lending last year. We repeat that he is over-rated and this narrative that he’s the saviour of Kenyan banking, being peddled by Oliver Mathenge and Ory Okolloh has to end.

Njoroge holds a constitutional office with security of tenure. With his appointment, he ceases to be a Jubilee operative but a national official whose overall allegiance is the constitution.

Overzealous media operatives in the Star can’t even spell his name correctly, yet they claim that he is the alpha and omega of banking, and doyen of best-practice. This dichotomy involving media and corrupt officials needs to come to an end. Let Njoroge be accountable to the people.