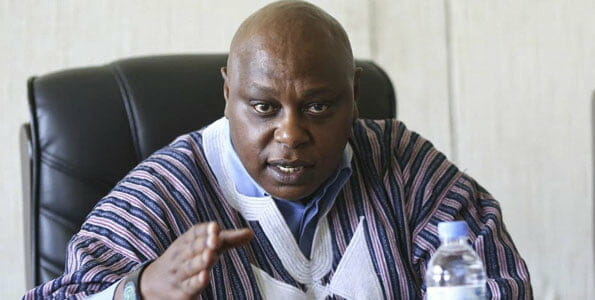 In the latest lecturing by unelected UN officials, Kenyan Maina Kiai also claimed Britain was encouraging despots around the world to crack down on democracy and human rights.

The grandly-titled “Special Rapporteur On The Rights To Freedom Of Peaceful Assembly And Of Association” launched a series of attacks on Government policies after a three-day visit to the UK.

Former lawyer Mr Kiai slammed key elements of the flagship anti-radicalisation Prevent programme – including a new requirement for teachers to report suspicious activity – and urged ministers not to bring in a ban on “non-violent extremism groups”.

Arguing the move would be “unacceptable” if it led people to be “fearful of exercising their rights”, he said: “I believe that the existing legal framework is robust enough to deal with any issues of extremism and related intolerance that could give rise to terrorism.”

Mr Kiai said he was “concerned” about the new Investigatory Powers Bill – which give security services vital abilities to monitor crooks online – warning it could have a “grave impact on the rights to freedom of peaceful assembly and association”.

He also criticised a crackdown on taxpayer-funded lobbying, and was particularly scathing about measures in the Trade Union Bill to curb strikes by militant barons.

A new double-lock requiring unions to get support from 40 per cent of members on a 50 per cent turnout to approve strikes was branded “profoundly undemocratic” and “disingenuous”.

Mr Kiai added: “Sometimes when you do not get it right, it is better to step back and start from scratch.”

And he made an astonishing suggestion that foreign dictators would use Britain’s example as an excuse to repress their own people.

He said: “The world notices when this country takes positive steps to strengthen its practice of human rights. But it notices even more when it moves in the opposite direction – restricting the space for democracy and human rights.”

But his series of lofty pronouncements sparked an immediate backlash.

“Britain is a free country but citizens have a right to be protected from the over-zealous use of trade union powers affecting our daily lives.”

Tory MP Philip Davies, a member of the Commons Justice Select Committee, added: “This lecture on human rights by somebody from Africa is staggering.

“He should clear off back to his own continent to look at some of the grotesque abuses of human rights that take place on a daily basis led by people like Robert Mugabe.”

Mr Kiai is the latest UN official to lecture Britain on its policies.

Officials have also claimed cuts were increasing the risk of violence against women, welfare reforms have violated the rights of the disabled, and called for Britain to take more refugees.

Courtesy of The Sun.