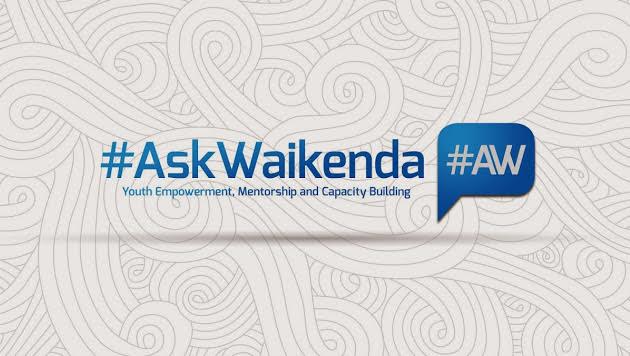 Caption: #AskWaikenda was a special purpose vehicle created by Machel Waikenda for the sole benefit of getting himself and his mother jobs. He was appointed Sports Secretary in Kiambu County while his mother got a plum post as Director of Immigration.

Kiambu County Sports Minister Machel Waikenda has hit the online campaign trail, drum-beating for Uhuru’s second-term, using coaxed statistics and bogus analogies to mask the incompetence of the Jubilee regime. Machel is fondly remembered for his #AskWaikenda weekly hashtag, whose primary focus was to gain proximity to the President for his own and his mother’s sake.

On 8th January 2014, Ms. Jane Waikenda was rushed to Nairobi hospital after “collapsing” in her office briefly after Ethics and Anti-Corruption Commission officers paid her a courtesy call. Jane was accused of irregularly issuing work permits.

Last November 23rd, EACC recommended charging of Jane Waikenda alongside an assistant director Abraham Mwaura for abuse of office. The EACC file recommending charges against the two was sent to the Director of Public Prosecutions Keriako Tobiko that week.

“EACC.FL/INQ/45/2014. Inquiry into allegations of irregular issue of permits by the Department of Immigrations. EACC recommends that the suspects be charged with abuse of office,” a statement from the commission indicated.

Waikenda issuanced of more than 300 work permits during her tenure as Head of Immigration, and is rumored to have pocketed Kshs. 1 million for each. Her sudden rise to such a high-posting baffled many, as she was just a mere secretary in StateHouse.

And to show the contempt that he has for constitutional offices, President Uhuru Kenya in his typical flagrant abuse of power and disregard for the Kenyan people, appointed her as Deputy Chief of Mission in both Pretoria and Algiers embassies, even as charges against her were confirmed.

Remember this is a President who consistently claims that his “hands are tied” by the constitution in the fight against corruption, a cheap excuse meant to scapegoat and shift blame. Real men take responsibility for their failure Bwana Rais. Machel Waikenda is hoping to replicate the hashtag mediocrity that shot him to fame, a move that sadly has been well prepared for.

It is in this regards that President Uhuru Kenyatta appointed Eric Kiraithe to be the Government spokesman, as the Jubilee flagbearer moves from a subtle to a more militant approach in communication. Already, Nation Media Group has toed the line by firing a list of writers and editors as ordered by Statehouse.

Today, the media house is said to be launching a new printing press, coming at a time when there is apathy against the mediocrity of the mainstream media. Could this be the worst investment decision by the soon-to-be irrelevant media house?

Only time will tell.