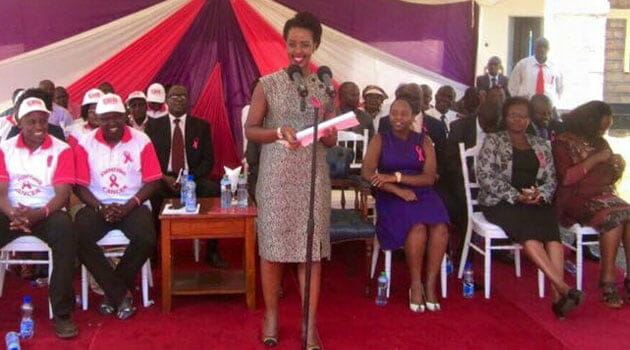 Machakos county First Lady Lillian Ng’ang’a has called on girls to abstain from sexual relations while in school and instead focus on their studies.

Her advice follows a presentation made by the Director of Medical Services Nicholas Muraguri on Monday to President Uhuru Kenyatta that showed adolescents and youth aged between 15 and 24 account for 70 percent of pregnancies reported in Kenya.

“I’ll talk about something sensitive but it’s not sensitive anymore. Let us stop having sexual relations when we’re still young. Let us study. Mambo ya sexual whatever you’ll do it after. There’s a lot of time for you to engage in that because when you get pregnant, what happens to the boy? He goes on to study…and your life is over,” she said.

The report made by Muraguri on Monday set the stage for the #EndAdolescentAIDS campaign launch and showed that this 70 percent evidently did not protect themselves from sexually transmitted infections either.

In support of the First Lady’s #BeyondZero campaign that seeks to end infant and maternal mortality, Ng’ang’a also called on expectant mothers to seek pre-natal care.

“Spread the word when you go for your chamas, when you go to church, weddings, tell mothers to go for check-ups at least four times before they give birth. The hospitals are there, the governor is going to open new community hospitals in March so really we have no excuse of not giving birth in hospital,” she said.

Visits that should ideally prevent the transmission of the HIV virus from mother to child and in the long term help #EndAdolescentAIDS.

Ng’ang’a was speaking on Thursday at the Masinga Model Health Centre where she took her campaign of encouraging the Machakos electorate to get screened for Cancer.

“If it is detected early enough it is curable. So really it is up to you to make sure you go for a medical check-up regularly. Cancer is a reality and it is robbing us of great people. It is not a disease that is the preserve of the elderly so let us all be vigilant. Let us exercise, let us eat health so we live a long life,” she urged.