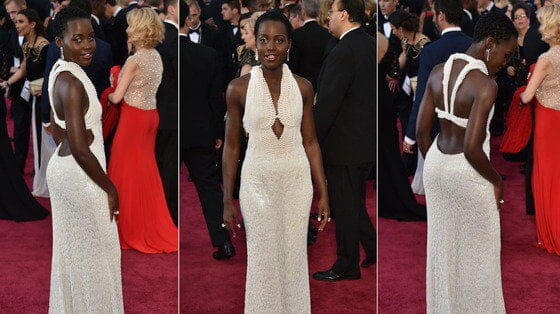 Lupita’s 13 Million shillings dress that was stolen on Tuesday was yesterday returned to the scene of crime. The custom Calvin Klein Collection dress made of over 6,000 pearls was returned to The London Hotel in West Hollywood, where it was originally taken. The thief who had taken the dress made an anonymous call informing where to find the dress.

The caller told TMZ that it could be located in an abandoned bathroom on the second floor of the hotel. But the caller seemed unsatisfied with the dresses worth. He claimed to have taken a few pearls off the dress to have them looked at by a garment expert, and was told they were not real pearls. Although the dress was valued at 13 Million shillings due to the unique material used on it, the pearls used on it aren’t that much more expensive than plastic.

But the detectives have said they will still work with the owners of the dress, to confirm if that is the actual dress. And the authenticity of the pearls will not affect the ongoing investigation.