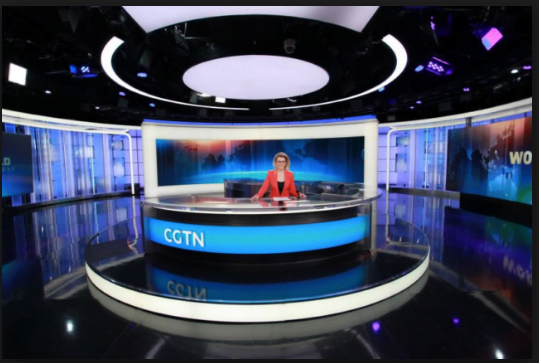 Sports journalists at the Chinese media giant CCTV AFRICA are up in arms against what they term as high handedness by one of the many senior Chinese staff.

It is alleged that they are wondering how they are expected to write sports news on the ongoing world cup in Russia, when the lady by the name Hu Yue, walked into the newsroom and switched off all TV sets.

Hu is the Director of the company’s Broadcasting Department. Immediately she did so, some reporters were handed memos, for being found watching one of the matches on Saturday evening.

All other TV stations that have been airing the matches were disabled. Staff in the Technical and Broadcasting departments are also unhappy with her brazen anti-world cup approach.

The sports desk that is headed by one Mr Suo Liang, is frustrated by the fact that the man doesn’t seem to intervene, yet newsroom operations clearly do not fall under Hu’s. Even the new Newsroom deputy Director, Cornelis Vandragger, has not issued any communication.

The company has currently sent Mahia Mutua to be part of the journalists covering the football expo in Russia. What is amazing is the fact that had China been participating in the event, all journalists, including those who do not cover sports, would be forced to write pro-China stories.

What also annoys the sports reporters is the fact that Sadique Shaban, who was recently appointed to deputise Suo Liang chose to go on leave, and had not communicated on the impending moratorium on watching the world cup. The station management must disjointed, as each boss runs the show their way.

The reporter who was disciplined was neither warned, nor given justification for the memo. All these are happening as the HR and senior Chinese employees opt to remain silent. Some of the Chinese managers are said to have lost touch with the reality in Africa and choose to impose Chinese communist ideologies on their employees without even understanding their cultures. Employees in the limping Chinese broadcaster, have previously raised issues with the company’s pay disparities. While locals are overworked and underpaid, their foreign counterparts – especially whites and South Africans, are paid top dollar. The company has not been keen on hiring Kenyans to fill the positions left by Line Producers Newton Ndebu and Wazir Khamsin who have since joined BBC.

The company, instead, opted for South African Matiba Mahlajhe… Another white producer is set to arrive later. Albert Gachiri is the only Kenyan line producer remaining. Despite respected editors and news producers who have shown interest in the two positions, the company has always looked to South Africa.

These are positions that can be handled by Kenyans even from within the newsroom itself. A reporter by the name Soni Methu was sacked under controversial circumstances despite calling in sick, this happened after Nyakundi highlighted the rot at CGTN and mentioned her, it seems that someone is trying to cover up something. When a plane crashed in Kinangop recently, the deputy Bureau chief worked at downplaying the stories, opting to concentrate on Chinese propaganda.

Mr Liao Liang also loves treating his African juniors with contempt, shouting at them over little or even nothing. Most of the foreigners have been here for more than six years running, and have been assigning themselves new roles to justify their stay.

They are now changing their job descriptions in order to dupe the immigration and the labour offices to extend their stay in Kenya denying locals the well-deserved jobs. This comes as Interior Minister Fred Matiangi promises to reign in rogue expat employees in the country. There have also been cases of sexual harassment against restaurant employees by a certain Chinese cook- Who was recently sent parking after the issue was highlighted in China.

Recently, when China’s number four visited the country, the company colluded with a Kenyan construction company to hurriedly repair Wood Avenue without the necessary approvals. Since the patchwork was done in the dead of the night, the company dumped large stones in the drainage…

There has been talk that some Chinese employees who have overstayed their work permits are set to leave the company, but it is also rumoured that they are colluding with some immigration officials to acquire work permits using new job descriptions among them are Hu Yue, lioliang, sunlan(Karen) of talk Africa, Helena of faces of Africa, Julia Luo head of technical,Nicolas.

From the look of things, the Chinese dragon is bleeding, confused and lost, some have to use English names to hide their identity. as BBC angles to maximize the rich fields of African stories. And this can only be blamed on the new Bureau chief, a Mr Huang, who seems to be playing into the hands of the likes of Hu, who seem to be keen on amassing wealth through corrupt deals. Huang is confused an lacks knowledge in media