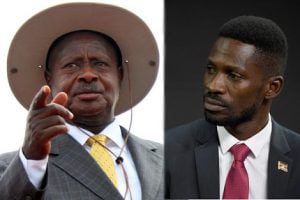 Caption: Ugandan President Yoweri Museveni has received heavy criticism after the arrest and detention of Bobi Wine. With people all over the world condemning the incident.

Africa is not new to revolutions. For many years we have seen citizens standing up to oppressive tyrants and despots and firmly telling them their time is up, that enough is enough. It is through these revolutions that many African nations have been liberated.

The 21st century brought great technical advancements, one of them being the birth of Social Media. Something that would end up being one of the biggest tools of communication. Through time, Social Media has transitioned from being just a tool to pass on information but a platform for people to fight for their rights. Through Social Media everyone’s voice can be heard and amplified by millions of other users.

Here in Kenya we’ve seen major scandals exposed through Social Media. Cyprian Nyakundi, the chief editor of this site, for instance, has been taking on big corporations and individuals and laying out their dirty side for the public to see. These exposes of course come at a cost; myriads of court cases and multiple illegal arrests just a few.

Recently, we saw Africa stand up to Ugandan President Yoweri Museveni after the detention of Kyaddondo East Member of Parliament Robert Kyagulanyi, popularly known as Bobi Wine. Twitter users caught the whole world’s attention through the hashtag #FreeBobiWine with the hashtag reaching over 12 million users including artists like Chris Martin of the British rock band, Coldplay, Damon Albarn of the British rock band, Blur and award-winning Beninese singer Angélique Kidjo who signed a petition urging the Ugandan government to release him.

Throughout the week we saw Kenyans, Tanzanians, Rwandans and even Burundians keenly following events in Uganda and tweeting using the hashtag #FreeBobiWine.

In fact, most of the hashtag’s traffic came from Kenya. In the past one year, we have seen activists in Togo, Zimbabwe, DRC, Cameroon, Tanzania and now Uganda demonstrate on Social Media and had their voices amplified by their neighbours. We have witnessed hashtags started in Dar es Salaam trending in Kampala and Nairobi and vice versa. The support is then amplified on the ground through protests and petitions.

Sadly, Social Media hasn’t been all glittery. Recently, some platforms like Facebook and Twitter have been censoring a lot of content out out by online activists. Many top officials of these platforms have sadly collaborated with various governments to kill voices that stand up against them. For instance, Twitter suspended the account of popular blogger Cyprian Nyakundi who had been one of the biggest critics of the government and major corporations in the country. Through his account, he exposed some of the biggest corruption scandals in the country, causing the ‘big boys’ sleepless nights. Such cases are pulling back this revolution and discouraging many other activists.

This new age of Digital Pan-Africamism comes at a time when most journalists have become biased with their reports while others are suppressed by active regimes. Social Media is slowly overpowering Media Houses. Many people prefer getting their news from different online platforms as opposed to TV, Radio or Newspapers because it gets to them faster and is raw and unbiased.

With that said, current African autocrats and tyrants should therefore be very afraid, because a new wave is coming, one never seen before and it will capsize their boats of impunity.