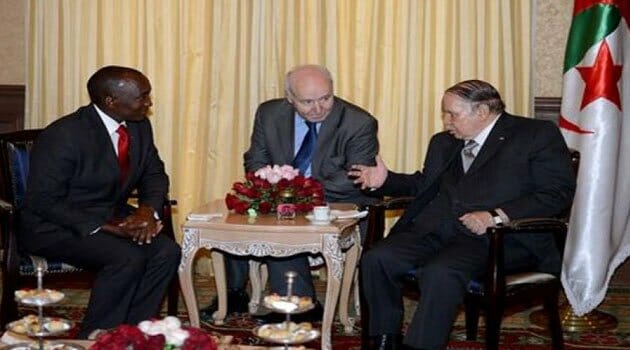 Kenya has opened a new Mission in Algiers, Algeria and posted Ambassador Moi Lemoshira.
Lemoshira presented his Letters of Credence to President Abdelaziz Bouteflika, on Sunday February 23, 2015 as Ambassador Extra-Ordinary and Plenipotentiary of the Republic of Kenya to the People’s Democratic Republic of Algeria.

During the ceremony held at the People’s Palace in Algiers, Lemoshira presented personal greetings and best wishes from President Uhuru Kenyatta.

President Bouteflika congratulated the ambassador and expressed confidence that the new Kenya Embassy in Algeria will help promote relations between the two countries. He noted that his country values its relations with Kenya both at the bilateral and continental level. He said his government is committed to closer relations with Kenya.

“Kenya and Algeria share the hard and painful struggle for independence since which the two countries have remained partners in the quest for Africa’s solidarity and development,” Lemoshira added.

He praised the Kenya-Algeria ties in forging “partnership at the African Union and other key international institutions to push for Africa’s agenda including continental integration and the realizing Africa’s rightful position in global affairs.”

Lemoshira who is Kenya’s first resident representative in Algeria highlighted strategic areas in Kenya-Algeria relations to include trade and investment; education, science and technology; and boosting government to government and people to people interaction through exchange of visits.

Lemoshira said that the signing of the Agreement on the Establishment of Joint Commission for Cooperation and the Memorandum on Political Consultations between the Ministries of Foreign Affairs in 2014 will give momentum towards strong ties.

He further observed that the two countries have progressed negotiations on bilateral arrangements in several areas including trade; oil, gas and energy; investment; sports and recreation and cooperation between leading institutions of technical training and capacity building.

He said that Kenya is committed to the “signing of these agreements/memoranda of understanding at the earliest possible for the mutual benefit of the peoples of these two friendly countries.”

He expressed Kenya’s gratitude for the support and cooperation that Algeria to extend within the spirit of Africa’s solidarity.

Algeria offers scholarship to Kenyan students across key areas of national development such as engineering, medicine and information communication technology, among others.