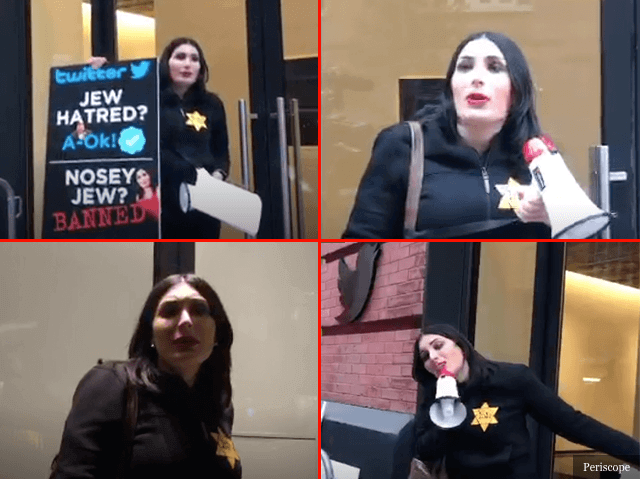 An American Activist chained herself outside the Twitter Headquarters demanding free speech after she was allegedly permanently by the masters of the universe, Twitter.

Twitter has recently come under the spotlight for suspending American conservatives and accounts that various government front as threats. Blogger Cyprian Nyakundi was permanently banned from the platform after the tech giant was manipulated by targetted actors that multiply reported Nyakundi’s account.

According to Breitbart, Loomer’s protest is in response to Twitter’s decision to permanently suspend her account after she had criticized Rep.-elect Ilhan Omar (D-MN).

“I threw away the key, and I’m here for the millions of conservatives who have been censored by Jack Dorsey and Mark Zuckerberg,” shouted Loomer, who stood handcuffed to Twitter’s office door, wearing the yellow Star of David on her jacket, Breitbart quoted

“Why is it that I get banned as a Jewish conservative but Louis Farrakhan is still on Twitter?” Continued the activist.

“This is an act of political warfare,” added Loomer, stating that “liberals sitting behind their desks in Silicon Valley” are able to determine who can and cannot express free speech “with the click of a button.”

With one hand chained to the door, Loomer held in her other hand a giant printout of her tweet which had been deemed in violation of Twitter’s rules against “hateful conduct,” causing her suspension from the platform.

“Everything I said was factually correct,” affirmed Loomer of her Tweet.

Loomer also had with her a printout of a tweet by Farrakhan — who still has an account on Twitter – which read: “I’m not an anti-Semite. I’m anti-Termite.”

As the crowd of onlookers grew larger, police officers began to barricade the sidewalk, and a woman approached Loomer to ask if she was able to unchain herself, or if she would need police to cut her free, Breitbart news further reports.

“I wish I could say something, but Twitter and Facebook will not let me speak,” responded Loomer, “You have to take it up with [them], they won’t let me speak.”

According to people in the scene, the NYPD has left the scene and Twitter is not pressing charges as long as Loomer does not block people from leaving or entering the building.