A huge magnitude 8 earthquake has stuck in northern Peru – the biggest in the world so far this year.

Tremors were felt more than 600 miles away in neighbouring Equador, with shocked witnesses describing buildings shaking as a result of the huge quake.

The epicentre was around 110 miles east of the regional capital of Moyobamba, and at a depth of around 65 miles.

American Tum Wuttke wrote on Twitter: “Totally felt that earthquake from a 9th floor hotel room in Lima, Peru. Lasted about a minute.”

It is not yet known if there are any casualties. 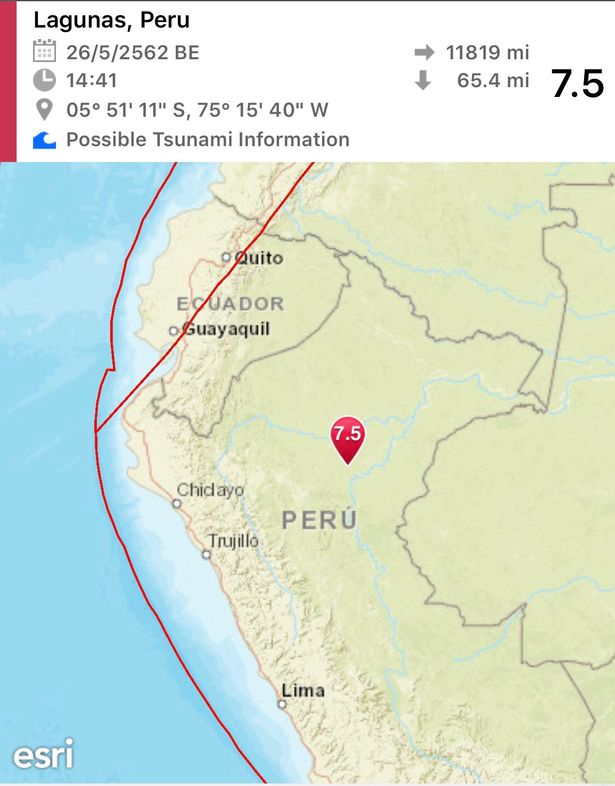 The quake happened in Northern Peru.

Initially the United States Geological Survey reported it as a 7.5 magnitude quake, but shortly afterward upgraded it to 8.0.

One person in Colombian capital Bogota, which is more than 1,100km north of the epicentre, told the EMSC: “The whole hotel was shaking.”

And another witness in Trujillo, Peru, nearly 500km away, wrote: “It lasted a long time with a final shake.”

In February a 7.5 magnitude earthquake struck close to Palora, in Equador.

Another of the same strength was reported in Papau New Guinea earlier this month.

The 8.0 magnitude earthquake is the biggest in the world so far this year.