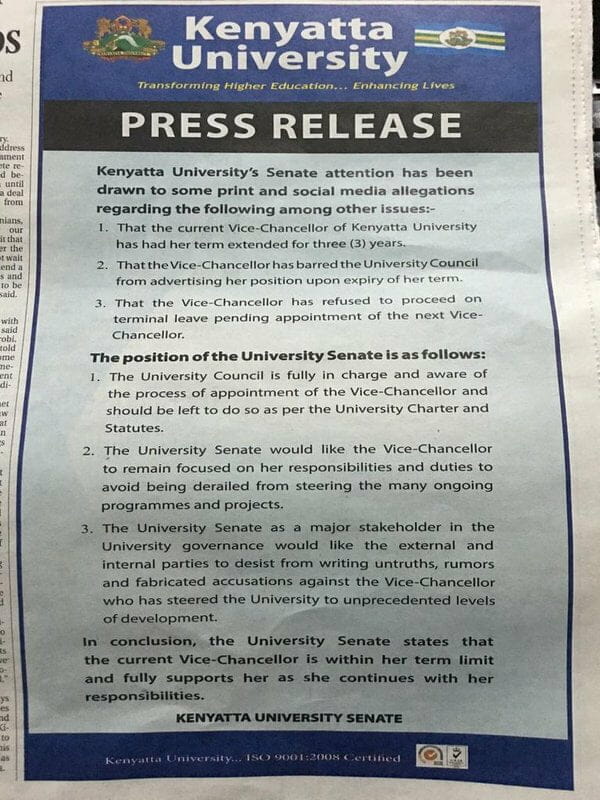 We are in a Lawless nation . Who can deny that ? When Nelson Mandela ruled for a few years, he relinquished power to Mbeki . The problem in Africa is that people who feel that power is sweet are never ready to relinquish power .

Although Mugenda is keen on extending her term through dubious means, the truth and law is that having completed the two terms, under the law, she is not eligible for re-appointment.
But what is now worrying is that Prof Mugenda is not ready to call it quits as she plans to hang onto the job for a possible third term which is against the universities Act 2012
The Act in Article 39.(1) says “The vice-chancellor of a university shall be appointed— (a) in the case of a public university, competitively by the cabinet secretary on the recommendation of the council; and (3) says the vice-chancellor of a public university shall hold office for a term of five years and shall be eligible for a further term of five years.
What is now worrying Kenyans is that whereas Mugenda is a beneficiary of competitive recruitment, it is shocking and worrying that she is now failing to respect the same and to give others an opportunity to serve in the same capacity as VC.

There has been pressure from all corners for her to call it quits . After the debate became too hot especially on Twitter #SendMugendaHome, Kenyatta University has decided to make a paid add to make matters clear- But the press release has worsened the situation . According to the press release, Kenyans should stop spreading rumors – So saying the truth is now rumors ?

Here is the press release