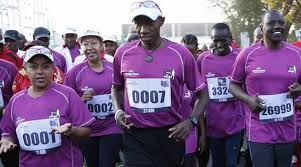 One of My Twitter Followers made a Tweet that made me think deeply. Just like me, He was shocked to see private developers, Land grabbers and suspected Drug lords assembled to show Support for Beyond Zero Campaign. It was laughable but not shocking because in Kenya you expect anything.

Shocking that Land grabbers and private developers who grabbed Langata Road Primary school playground are also concerned about children and poor Kenyan women. Tell me another Joke. One of my friends argues that a private developer would wish many children to die during childbirth so that many playgrounds will be deserted for them to grab . A funny but possible theory.

Wait, even suspected drug lords also care for this country ? In fact drugs have completely messed up with our youth especially at the coast . But our useless and bloated institutions mandated with fighting the drug cancer are completely sleeping. A friend from the Coast tells me that when they raid those places they just nail poor consumers who are weak to even  take on their heels.

I have said  this many times. We are a country of professional pretenders. We like praising leaders who are responsible for our suffering for doing what they are supposed to do  . What the F***ck