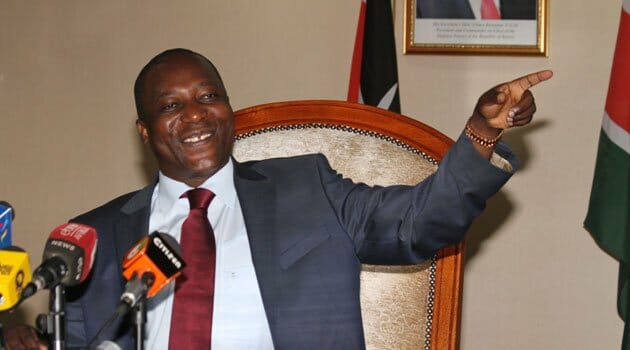 Cabinet Secretary Kazungu Kambi has disowned a document presented to the Industrial Court purportedly by Ministry of Labour officials indicating they can pay teachers a 128 percent salary increase.
Kambi said his ministry has not recommended an increment of basic salary of teachers in the issues before the Industrial Court, and maintained the government’s position that there are no funds to implement a salary raise. The supposed deal would have amounted to Sh137 billion payable over four years.

“We do not have money to increase salaries and the only reason is that we have recently harmonised salaries for all civil servants. We again wanted to do a Job evaluation expected in 18 months because we are talking about productivity, so as to measure what our teachers are doing to our children, “he said.

He emphasised that it’s the work of the Salaries and Remuneration Commission (SRC) to increase salaries and not his ministry.

The Industrial Court had ordered the Labour Ministry to file an economic status report on the issues in dispute.

Teachers’ unions have been demanding for increase in basic salary for their members.

The Kenya National Union of Teachers (KNUT) and the Kenya Union of Post Primary Education Teachers (KUPPET) last month presented a joint memorandum on the pay dispute to the Industrial Court in the quest for a salary increase.

Union Secretary Generals Wilson Sossion and Akello Misori together with their legal teams presented the 31-page memorandum detailing the demands they have been agitating for.

“The last negotiated increment on basic pay enjoyed by teachers dates back to 1997, pursuant to Legal Notice No.534 of 1997, which was implemented over a span of 10 years, ending in 2007. However there have been arbitrary non-negotiated increments in the name of harmonization of teachers’ salaries with those of civil servants,” read part of the memorandum.

Presently, P1 teachers earn a minimum of Sh16,692 and a maximum of Sh24,304 but the unions propose that the same teachers should earn a basic salary of not less than Sh58,863 with the maximum pegged at Sh68,355.

Allowances being sought by the teachers include housing allowance, responsibility allowance which is usually given to teachers with additional duties, annual leave allowance, hardship allowance, hazard allowance among others.

The unions demand that the review should be backdated to July 1, 2013.