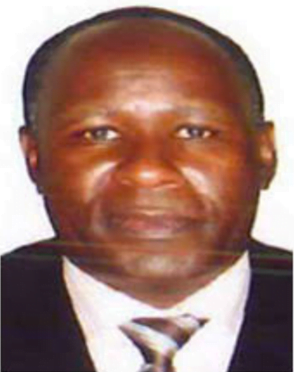 Hiding under the veil of professionalism and boasting of close links to President Uhuru Kenyatta, Kiprono Kittony has used his fake British accent to posture as an elite businessman working for the interest of the Kenya National Chamber of Commerce and Industry (KNCCI), a position he leverages to meet diplomats and Government officials in pursuit of personal favours.

But the truth is that Kiprono Kittony has his mother’s DNA embedded in him, a woman who is famous for chairing the Maendeleo ya Wanawake caucus, meant to champion for women’s rights. But just like her son who us using KNCCI for personal gain, Zipporah Kittony swept the coffers of Maendeleo ya Wanawake clean, and illegally-transferred property from the group’s name, to hers.

While Kiprono Kittony is seen as the face of KNCCI, his Vice Chairman Laban Onditi Rao is the hatchet-man who does the dirty jobs on behalf of his boss, who like to maintain a squeaky-clean image, to enable him cross the corridors of power and influence untainted.

We recently alerted the United States Embassy in Nairobi of a scam whereby Laban Onditi Rao facilitates the necessary paperwork for persons wishing to immigrate to the US under the guise of attending business conferences. Laban Onditi Rao then extorts the individuals between Kshs. 500,000 and 1 million, money which both Laban Onditi Rao and Kiprono Kittony split.

But who is this Laban Onditi Rao? 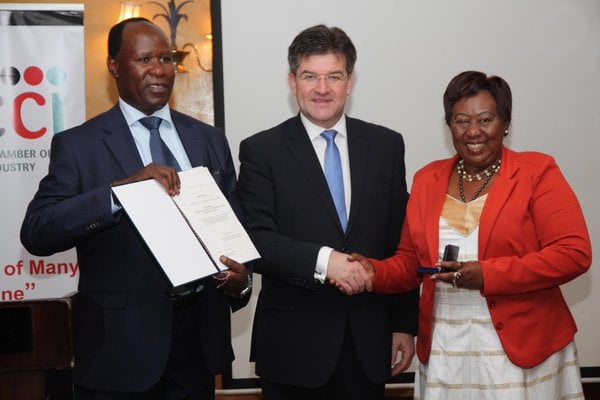 CAPTION: Laban Onditi Rao (far left) is joined by Zipporah Kittony, whom we have accused of using her son Kiprono Kittony, to fraudulently acquire a parcel of land along Mombasa Road.

Much isn’t known about the shadowy character who does the dirty work for Kiprono Kittony. However he is the force that has ensured Kittony’s election and political-survival in the murky KNCCI politics.

However the KNCCI board has raised issue of the duo’s underhand activities, most recently forging the chamber’s letterhead in correspondence with the chairperson of the National Lands Commission Muhammad Swazuri and the Director of Surveys.

We recently covered a scandal involving a couple, who had fraudulently attempted to grab a parcel of land along Mombasa Road. The couple, Simon Nyamanya Ondiba and Mary Nyamanya had forged paperwork claiming to own the parcel of land, but deeper investigations have unearthed more details that will interest the Directorate of Criminal Investigations (DCI) and the Ethics and Anti Corruption Commission (EACC), together with the office of Director of Public Prosecutions (DPP). 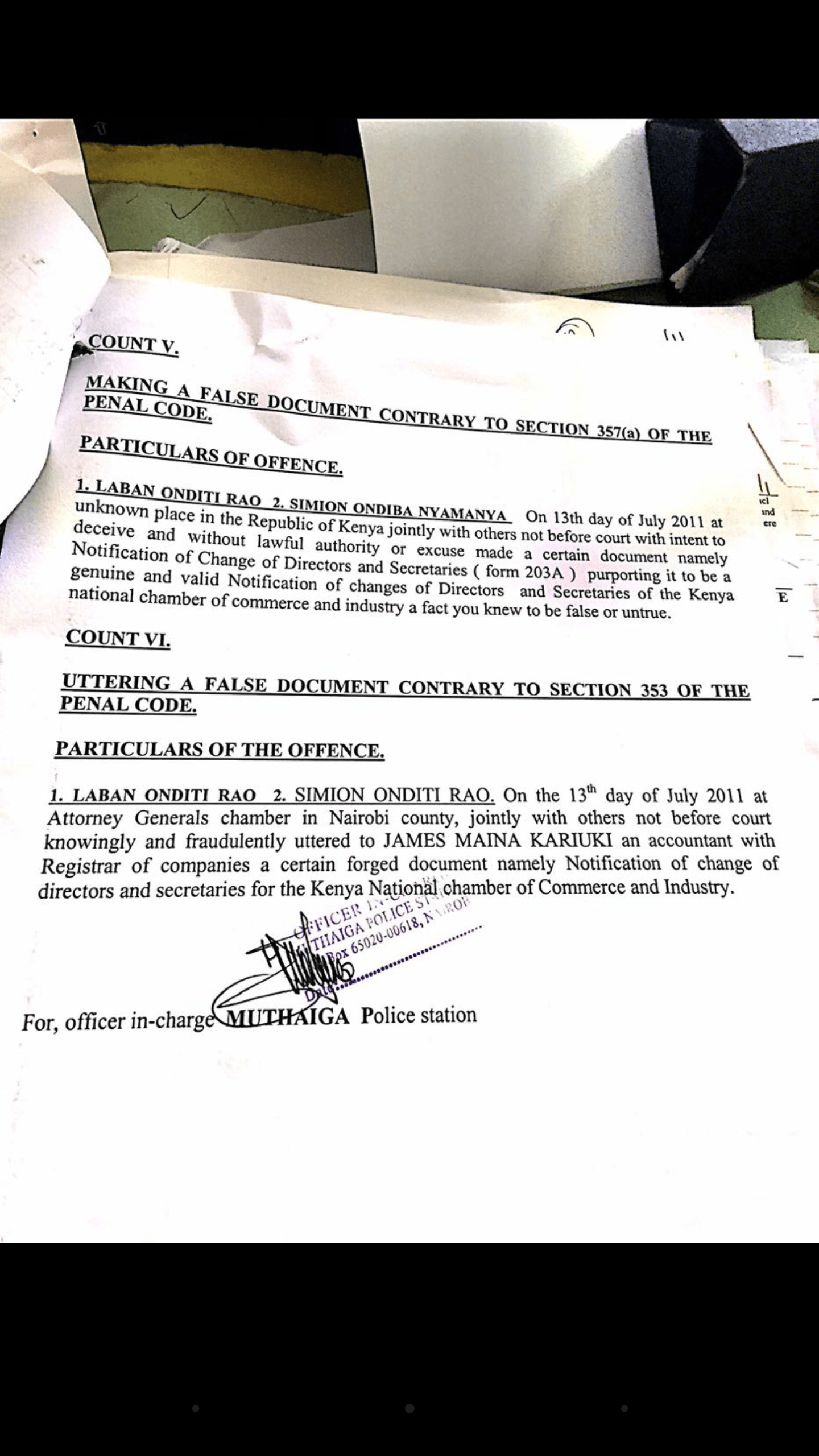 Laban Onditi Rao and Simon Nyamanya Ondiba were then arrested after other board members alerted the police of the crime. The Police Case Number 121/620/2011 was recorded at the Muthaiga Police Station after the duo were arrested on 4th of October 2011. They wanted to rig Kiprono Kittony in office as early as 2011, and also transfer chamber property to themselves. 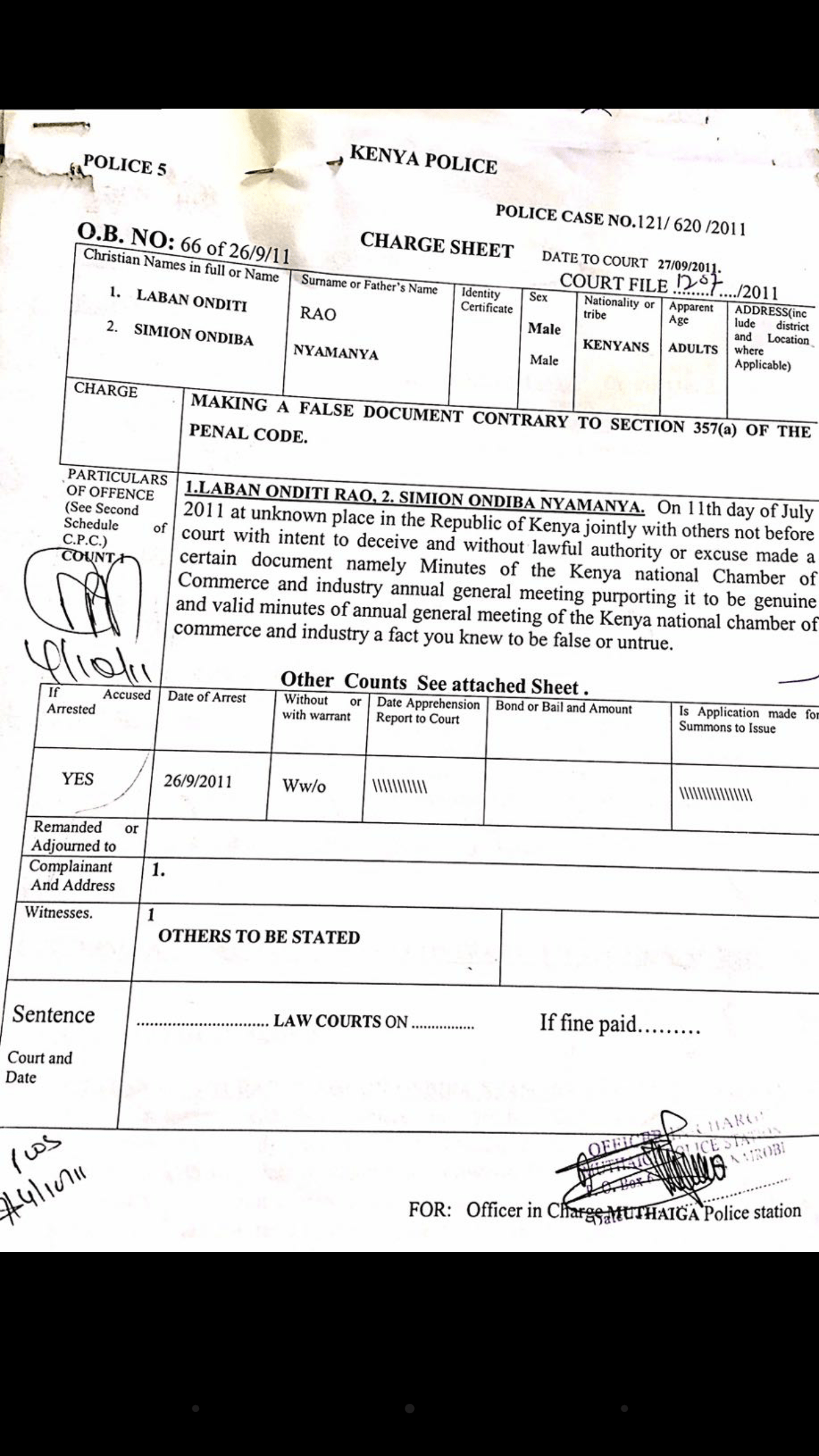 Being ambitious, the duo of Laban Onditi Rao and Simon Nyamanya Ondiba trained their sights on a parcel of land LR No. 65859 along Mombasa Road in Nairobi. Using forged Kenya National Chamber of Commerce letterheads, they roped in Government officials like Muhammad Swazuri, the Chairman of the National Lands Commission, Sarah Njui Mwenda, the then Chief Lands Registrar, Pauline Gatimu also at the Lands Registry, Johnson Kibiru who was receiving bribes on behalf of the Director of Surveys, Jane Amisi aide to Muhammad Swazuri, Geoffrey Swanya Birundu the then Registrar of Titles, D.M Ng’ang’a, the current Registrar of Titles, P. F Njoroge who was the new proxy receiving bribes on behalf of the Director of Surveys and Police Officer Edward Indeche who was working on behalf of the Embakasi OCPD, that has since been transferred to Marakwet.

Using the above individuals, and armed with forged letterheads from the Kenya National Chamber of Commerce and Industry, Laban Onditi Rao wrote to the aforementioned offices, claiming that the parcel of land is owned by his accomplice Simon Nyamanya Ondiba, both of whom had been arrested in 2011 on a near-identical case involving forgery/using false pretence. 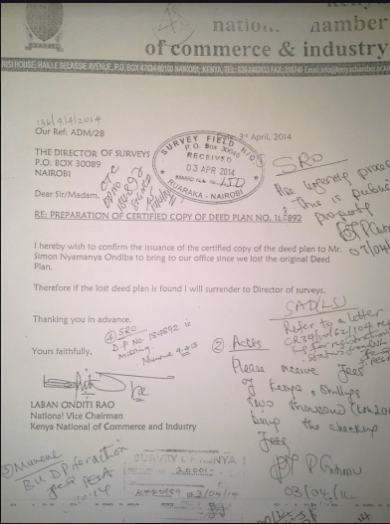 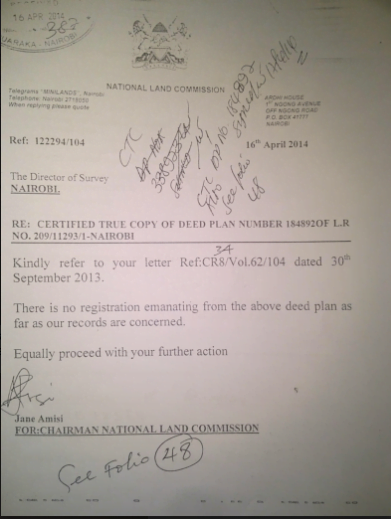 CAPTION: Jane Amisi who was receiving bribes on behalf of National Lands Commission Chairman Muhammad Swazuri, wrote this fraudulent letter to the Director of Survey. 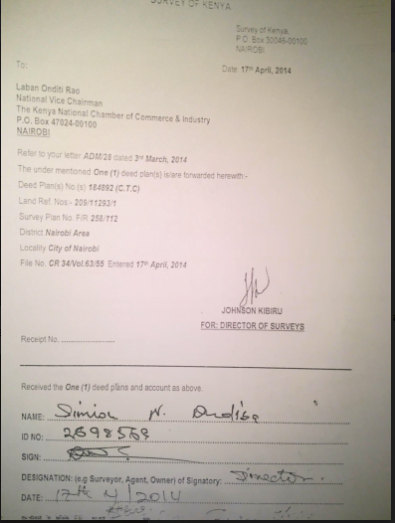 CAPTION: Johnson Kibiru who was receiving bribes on behalf of the Director of Surveys, wrote this acknowledgement letter to a forged KNCCI letterhead. 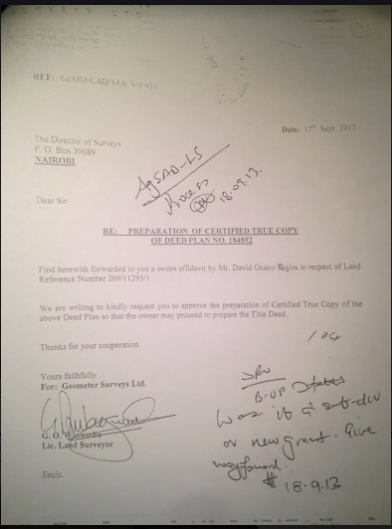 CAPTION: Geometer Surveys Limited followed up on behalf of Kiprono Kittony/Laban Onditi Rao in pursuit of their Title Deed.

They maneuvered their way into acquiring fake Certificate of Title Deeds, a fake Lease signed by Sarah Njuhi Mwenda and using their criminal lawyer Aggrey Preston Ochieng, they executed an illegal transfer of ownership, in a scam that is becoming highly common in Kenya. 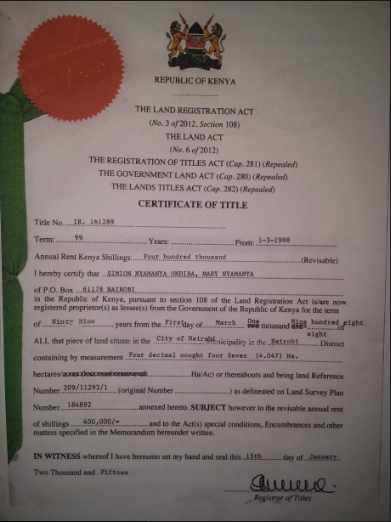 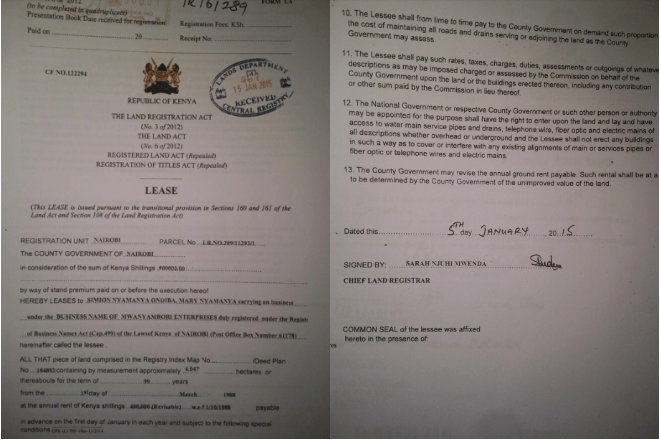 CAPTION: The forged Lease signed by disgraced former Chief Lands Registrar Sarah Njuhi Mwenda who had attempted to grab a parcel of land in Karen together with Charity Ngilu. Both were forced to resign around this same period. 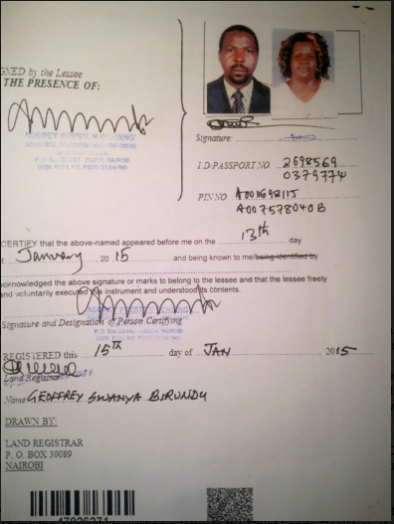 CAPTION: Geoffrey Swanya Birundu the former registrar of Titles is one of the most corrupt individual in Kenya who should be quickly arraigned in court for all the crimes he committed while stealing other people’s land.

We have gone out of our way to embark on this detailed piece of Investigation so as to assist all law enforcement organs in the country crack down on the individuals behind the land scams, that have left Kenya as an unattractive country for both local and foreign investment. Families have endured losses, many people have lost their livelihoods, while scammers and corrupt Government officials run riot, becoming bolder than ever.

Using the forged documents from the Land Registry, Simon Nyamanya working as a proxy of Laban Onditi Rao approached the Nairobi City County Secretary and Head of County Public Service to lodge the title deed for the purpose of Land Rate Payments. The forged title deeds were forwarded to the Nairobi County on 19th May 2015.

But the County Government of Nairobi has now moved swiftly to distance itself from the fraudulent actions of the Lands Registry/Survey’s Office, but rectifying the anomaly by writing a letter to the Chief Lands Registrar, stating that the property LR No. 65859 was allocated to and has been owned by one individuals since 27th April 1995, adding that the same individual has used the title-deed as collateral for loans from several financial institutions. The County further confirmed that the owner has been paying rates since 2008. 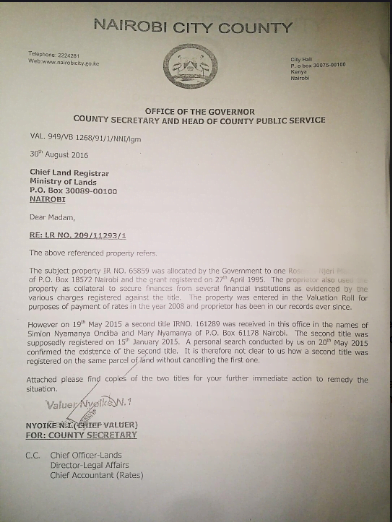 CAPTION: A letter from the County of Nairobi to Chief Lands Registrar confirmed the fraudulent attempt of the office to acquire someone else’s parcel of land illegally. The Chief Lands Registrar is yet to respond, in the hope that they can make more money by extorting the individuals involved.

The County Government of Nairobi has also moved to rectify the anomaly within the system of its database, after an internal investigation. There may have been a collusion between the fraudsters and the data team in the County, enabling the fraud to reflect in the County Computer System. 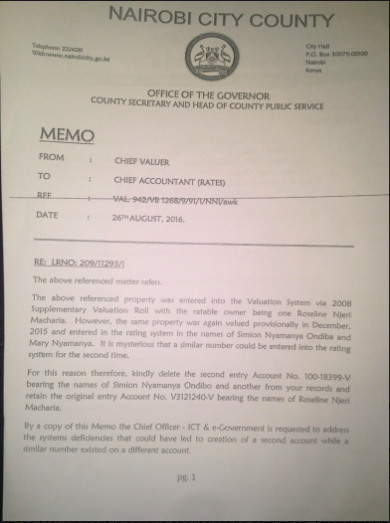 CAPTION: Internal memo at the Nairoby County has rectified the anomaly occasioned by corruption at the Lands Registry.

To execute this particular scam, Laban Onditi Rao and Simon Nyamanya Ondiba used the high-level contacts provided by Kiprono Kittony, who claims to have direct access to President Uhuru Kenyatta, further claiming to senior Government officials that he has the blessings of Statehouse to execute the fraudulent acquisition of land and property.
We hereby petition all law enforcement agencies to swiftly move in and arrest all the individuals mentioned in this article, so as to show the country that the Jubilee Government is serious about fighting corruption. President Uhuru Kenyatta needs to seize the moment for the sake of posterity to cleanse his image as the protector of thieves, after his horrible display last year, where he defended former Devolution CS Anne Waiguru, even as she was stealing billions.
Would you like to get published on this Popular Blog? You can now email Cyprian Nyakundi any breaking news, Exposes, story ideas, human interest articles or interesting videos on: [email protected] Videos and pictures can be sent to +254 710 280 973 on WhatsApp, Signal and Telegram.