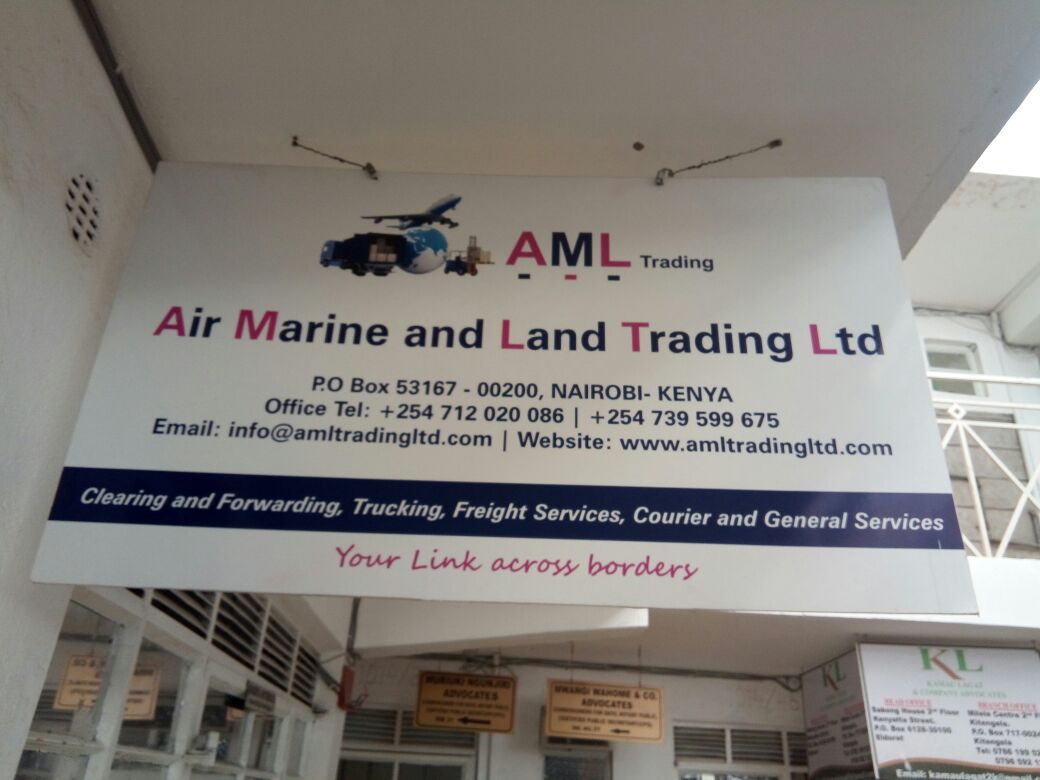 While other countries are speeding up processes for ease of business, the Kenya Revenue Authority (KRA) is devising ways and means of frustrating genuine businesses in a bid to solicit bribes.

We are covering a story of how the Kenya Revenue Authority illegally impounded a container imported by a Chinese company on behalf of Kenyan importers, who had Consolidated their goods sent through Guangzhou.

Can you imagine importing your goods and KRA withholding them for no good reason? Just so that they can exploit your foreign status to demand a bribe? Well this is exactly what happened in this instance.

The importer Star Africa Group of Companies was registered in 2015, and has been in the business of importing since then. But in February 2018, one of their containers with Consolidated imports for an assortment of Kenyan businessmen, ran into trouble. 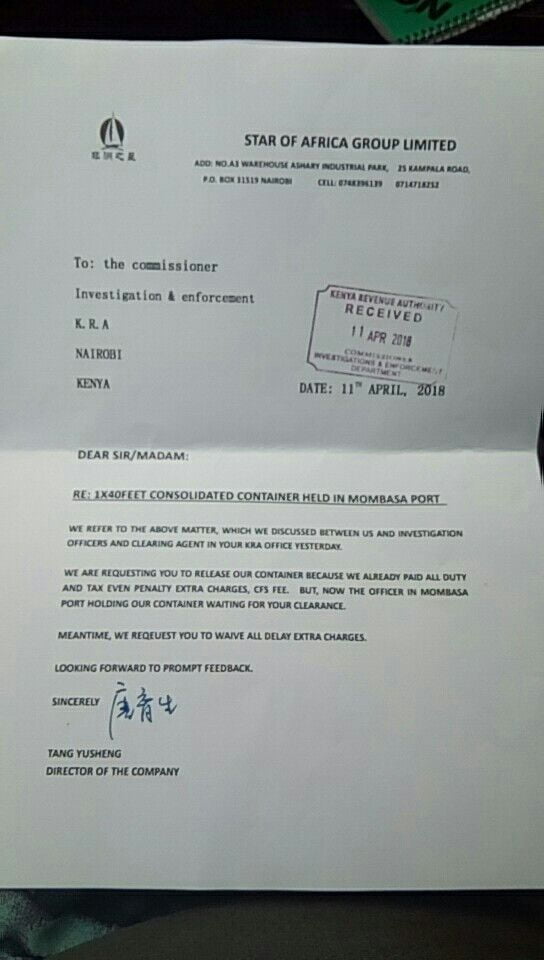 CAPTION: Letter by the importer Star of Africa Group Limited to KRA which has fallen on deaf ears.
The importer had procured the services of Air Marine and Land Trading Limited, a licensed clearing agent who have been given a password to the KRA system and have been in the business for over 10 years. The company is run by a conman by the name of Sylvester Kyalo Mutie.

The Kamba conman Sylvester Kyalo Mutie is based in Kitengela where he has hatched an elaborate scheme with KRA officials, to fleece his clients by concocting fictitious side-shows, meant to compel them to part with bribes.

In this instance, the importer of Chinese origin, was accused of forging a banker’s cheque for the purposes of paying duties. The importer considered the accusation absurd, considering that the Chinese are not accustomed to using banker’s cheques, and all payments to the clearing agent were made in cash. 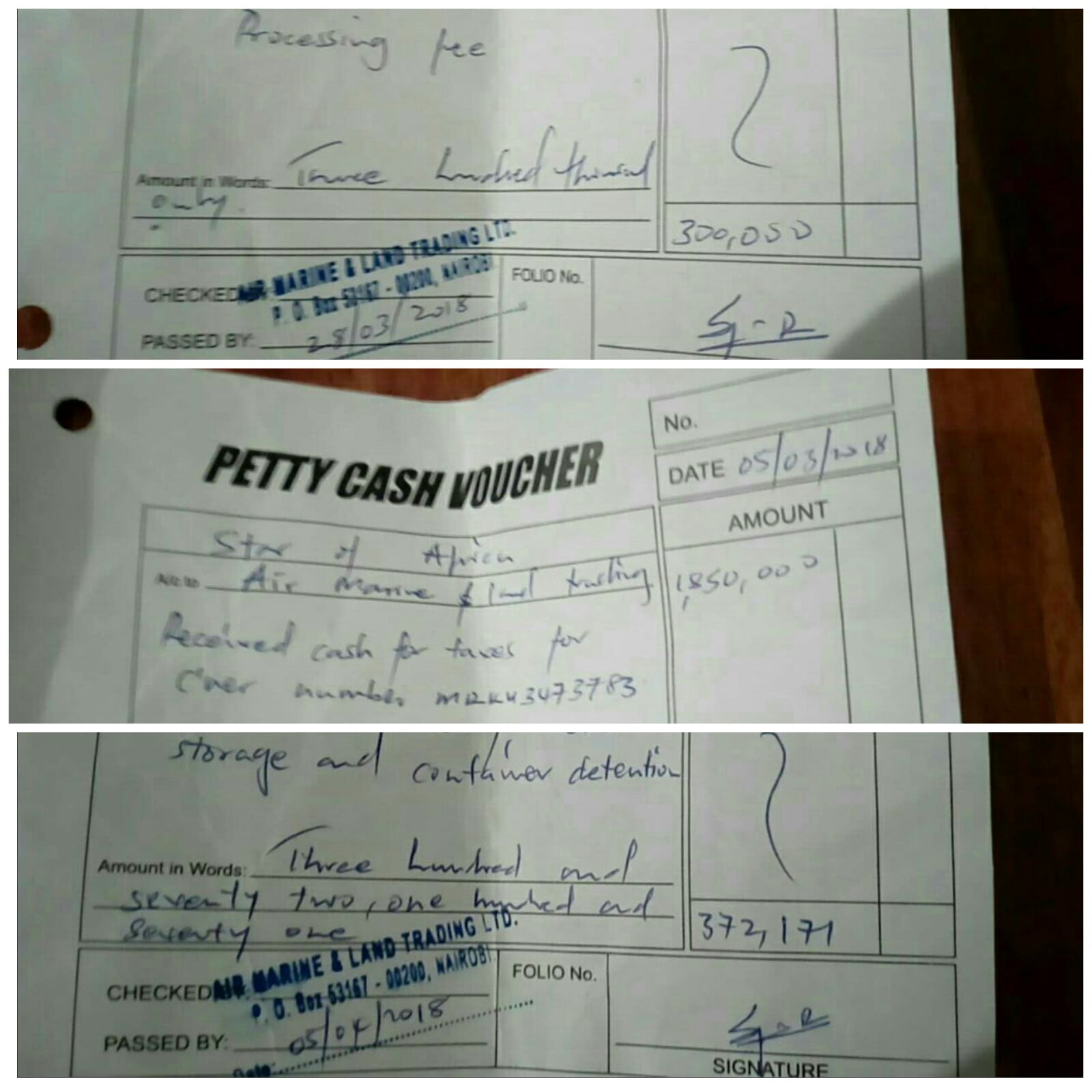 CAPTION: Some of the petty-cash vouchers given to the clearing agent by the importer. The importer was surprised to be accused of issuing a banker’s cheque yet he has never used that ever.

Kamba conman Sylvester Kyalo Mutie used to go to the office of the importer and receive cash which he would sign a petty cash voucher for, as recorded in these documents.

The importer visited the KRA department concerned with “investigations” and met the staffers, a male and female, who are based on the 5th Floor of their Corporate offices in Upper Hill, and the officers demanded a bribe in-order to release the container. 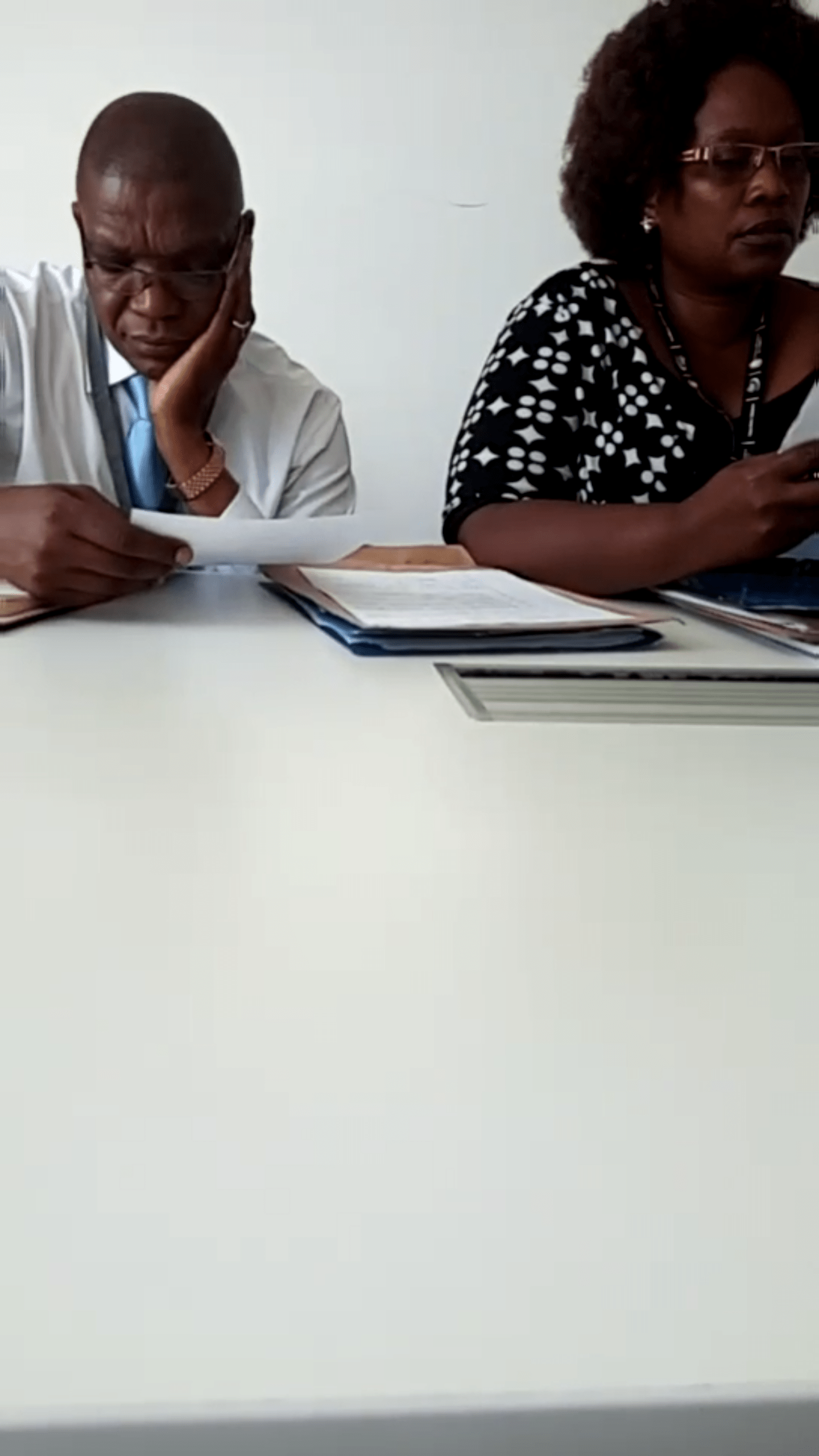 CAPTION: The KRA officials based on the 5th floor at Upperhill offices, pretending to act very “busy” but essentially angling for bribes.

If KRA officials want bribes, is it possible that their greed is compounded in the duties and related costs, instead of demanding it as an extra cost? Because it’s normally not possible to bribe because such costs cannot be factored in, or justified in balance sheets. Just an idea.

So KRA in conjunction with Kamba conman Sylvester Kyalo Mutie forged their own cheque, imposed fictitious allegations on an importer, withheld a container which has been duly paid for, for a period of 3 months, and still refuse to release the container. 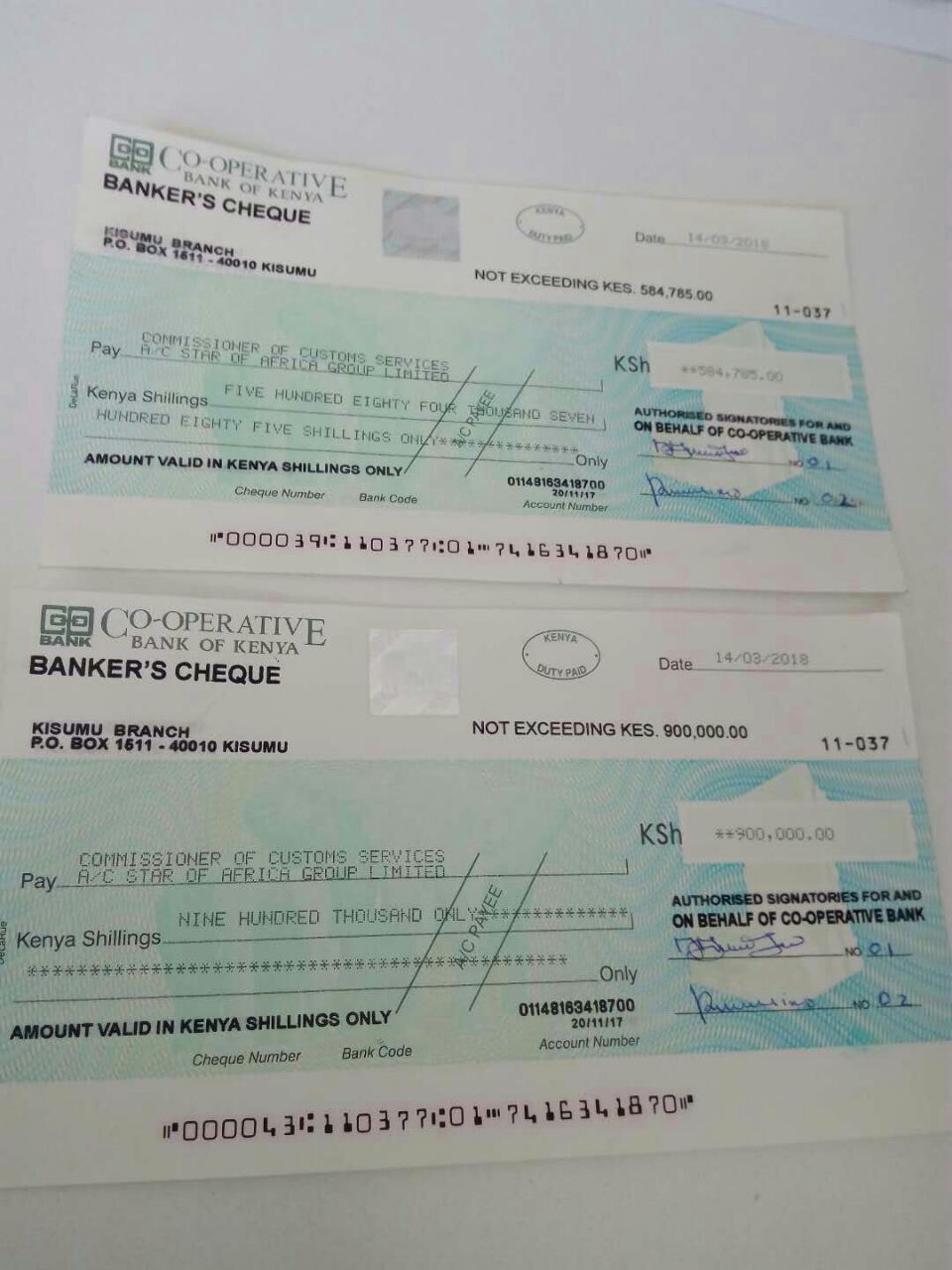 CAPTION: The forged banker’s cheques which KRA is accusing the Chinese importer of using. Instead of arresting the people who procured it, or the clearing agent, they want to make frustrate an investor who has already cleared his dues.

Now the importer has had to incur an extra cost over and above the prohibitive duties charged by KRA, to pay a lawyer to seek an order for the release of their goods. Meanwhile, goods are still accumulating storage (demurrage) costs at the CFS facility. System ya majambazi! 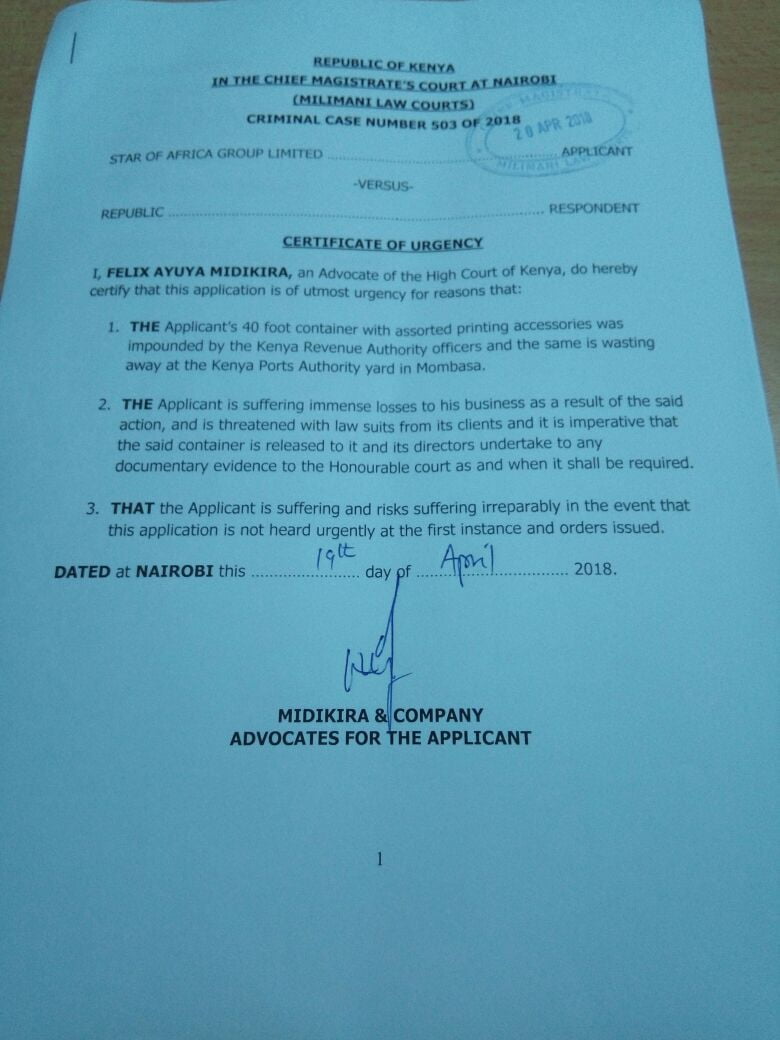 CAPTION: The importer has had to file a case at great costs and much disruption to the businesses of 23 importers, just to compel KRA to release the container. Why is doing business in Kenya so difficult?

And yet Uhuru is in Britain talking up a big game, and his usual cock-and-bull stories of how Kenya is open to investors. Treasury CS Henry Rotich under whose docket KRA falls, is busy peddling lies about Kenya’s economic growth, yet the same Government is busy undermining investment.

That container is holding goods imported by 23 Kenyan businessmen who have had their businesses disrupted by this action by rogue KRA officials.

In a functional economy, those KRA officials would be interdicted tomorrow morning and jailed. Sylvester Kyalo Mutie by now should be in Kamiti for economic crimes. 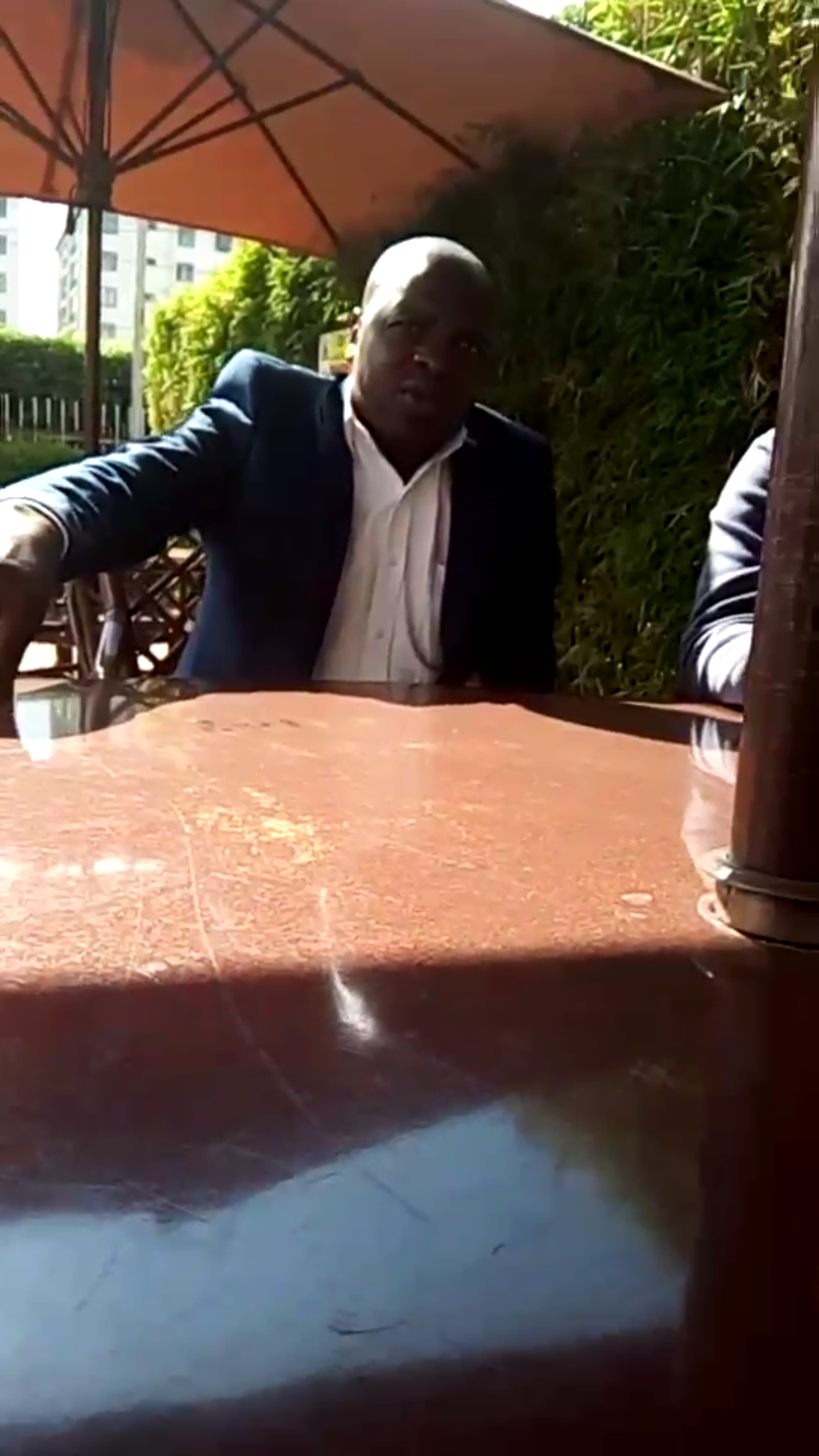 CAPTION: Kamba conman Sylvester Kyalo Mutie. Kamba’s have started becoming notorious criminals in the country.
Would you like to get published on this Popular Blog? You can now email Cyprian Nyakundi any breaking news, Exposes, story ideas, human interest articles or interesting videos on: [email protected] Videos and pictures can be sent to +254 710 280 973 on WhatsApp, Signal and Telegram.