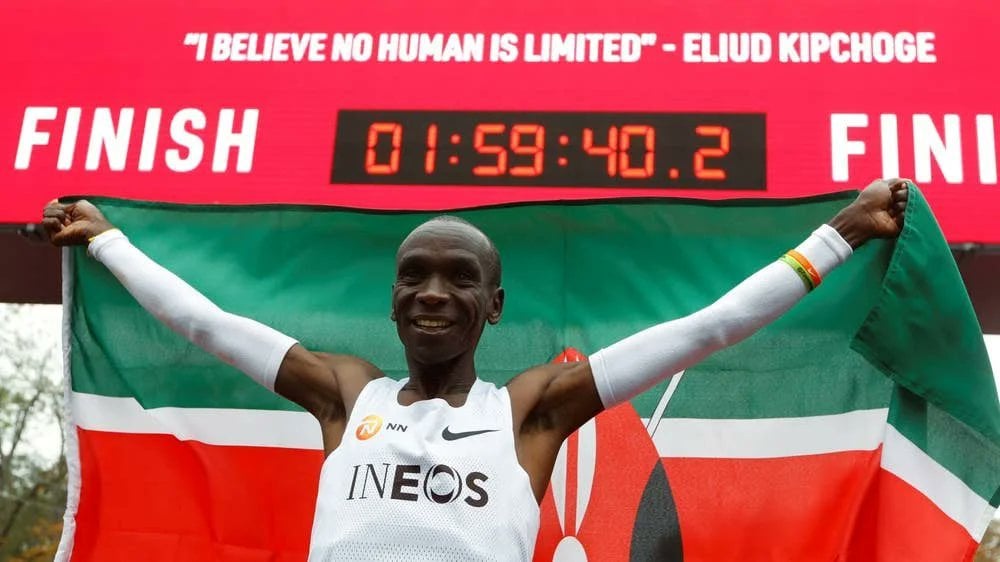 The Kenya Revenue Authority (KRA) has given Olympic Champion Eliud Kipchoge 5 days to pay a total of Ksh125 million in tax.

The rogue tax agency has made it clear that Kipchoge is expected to remit the whole amount, payable as tax, as soon as possible failure to which they’ll institute other measures to recover the money.

Kipchoge is the first man to run a 42 Kilometres marathon in under 2 hours, a fete that some other athlete recently tried and failed miserably.
Former Olympian Nick Symonds tried but he couldn’t even last one mile at Kipchoge’s pace.

In the challenge dubbed INEOS159, Kipchoge raked-in more than 400 million shillings, a fete that attracted KRA who invited him to their offices after he jetted-in but the marathoner is said to have declined the invite.

KRA gave the marathoner five days order stressing that no one is exempted from paying tax.

The money was pocketed by officials at KRA, Kenya Ports Authority (KPA) and Kenya Bureau of Standards (KeBS) and their cronies which include companies that evade tax.

The rogue officials were said to be colluding with unscrupulous traders to facilitate false declarations to deny the taxman requisite taxes such as import duty. They also allow in counterfeits in exchange for kickbacks

In May, the Directorate of Criminal Investigations (DCI) arrested over 40 KRA junior staff for aiding and abetting tax evasion.

The case is dragging in court while the real culprits sit comfortably at Times Towers, others handed other parastaral jobs so that they can continue stealing.

In the 41 arrests, KRA had interdicted a total of 75 staff members. In 2018, 85 were fired for being a part of tax evasion racket.

The Govt agency is rotten, yet the law enforcement authorities don’t go for the main perpetrators.

We at cnyakundi.com insist  that everybody should pay taxes, but in Kenya we know most leaders don’t pay taxes.

The Kenyattas are tax evaders, they gifted themselves a tax exempt certificate in the merger between Commercial Bank of Africa (CBA) and Nic Bank.

The Odingas have recently fallen into scrutiny for evading tax, most of the cars that belong to the former Prime Minister and AU Infrastructure Development boss Raila Odinga have evaded taxes

William Ruto the crook is a well-known tax evader. The man from Sugoi has been giving contributions of over Ksh15 million every weekend to churches. Where does he get that money? Stealing, tax evasion and money laundering.

Leader of Majority and Garissa Town MP Duale evades taxes by smuggling sugar, rice and other stuff through Kismayo. No wonder Somali hotels in Nairobi are praised for giving huge portions of food, all smuggled into Kenya. They can afford to do that because of tax evasion.

It is on the back of oppressed Kenyans that these leaders joyride yet they themselves are not paying taxes.

In this article:Eliud Kipchoge, INEOS159