Beatrice Andega, the surviving widow of the late Papa Shirandula had, at the celebrated comedian’s funeral called out Karen Hospital for medical negligence that might have led to his death.

“They didn’t consider his condition an emergency and he died while we were at the waiting bay. When he went to the hospital, he requested for three tests of malaria, pneumonia, and Covid-19 but the hospital concentrated only on COVID and ignored the rest,” Ms Andega said.

While speculations are nigh that the actor succumbed to the novel coronavirus, his father Cosmas Bukeko has denied the claims

“For now l cannot say anything about his illness until we sit with the hospital. I’ll travel to Nairobi and together with his wife, we shall engage a lawyer to get the proper information from the hospital,” he said.

Courtesy image of the Karen Hospital 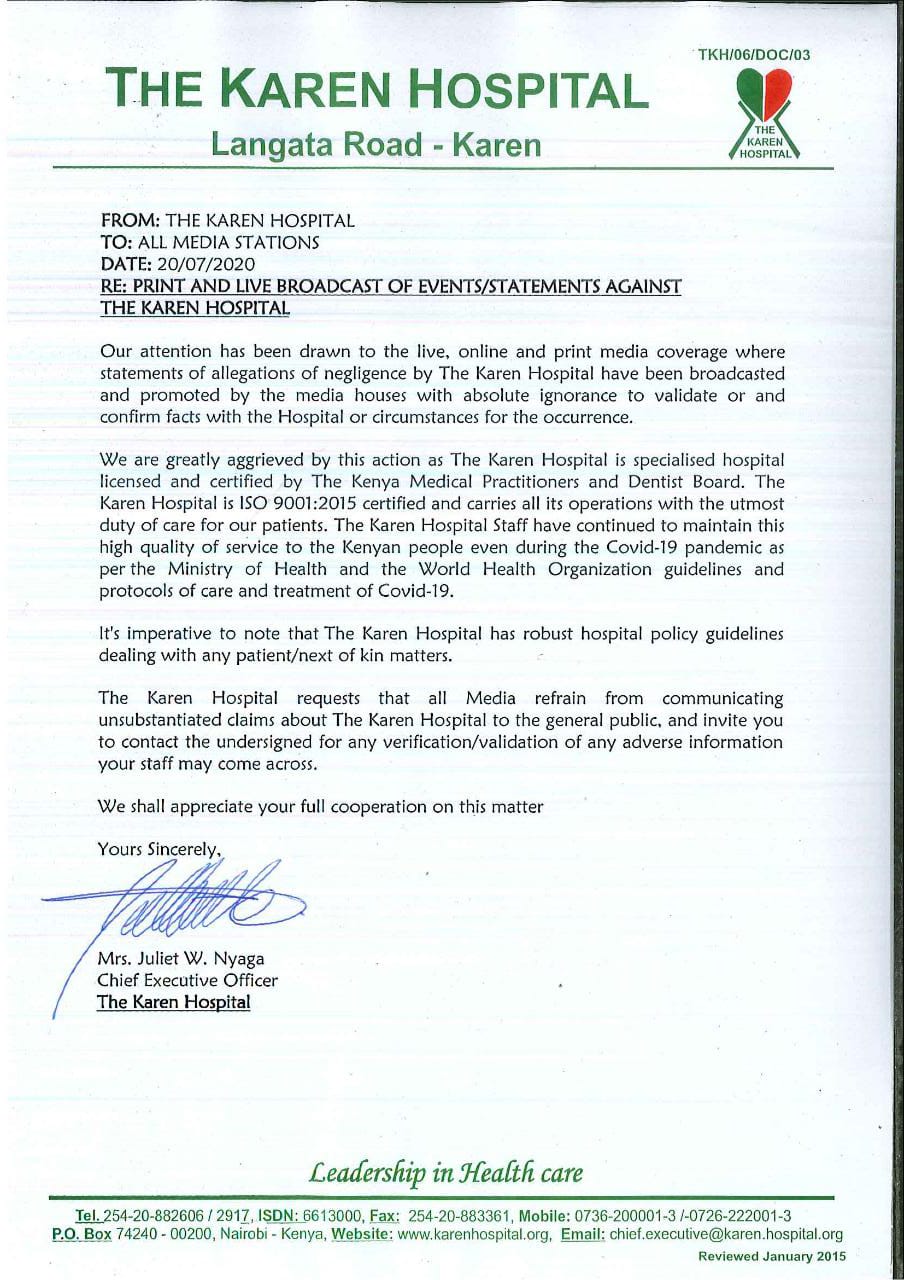 An empathic CEO would have began by condoling with the family of Charles Bukeko (RIP), now what is this? The institution only cares about its brand? Very unfortunate! https://t.co/DnSZeYTlZR

Public relations as course should be taken seriously. There are unemployed graduates who can draft a better official communique having done theses.

When i was reducing foolishness in school, one great Teacher Mr. Amunga once said, the media is a mirror for the society. They show us what we are. A mirror won't ask you wether you think sukuma wiki is stuck between your teeth. It will just show you!So Papa was not ISO? Surely!

Just like did Kenyatta National Hospital in the case of the late Prof. Ken Walibora amongst many other Kenyans.

Some hosptital administrators got the weirdest attitude and poor training.
May they Rest in Peace.

Primitivity of the highest order. No African whether learned or illiterate admits liability.

Very sad. They imply the observation by the customer aired LIVE on TV was biased?

In my limited knowledge of the English language, the Karen Hospital have neither confirmed nor denied anything. Just talked about licencing, standards, policies etc and required that they be contacted for validating any adverse reports that one and any media house may come across

An outraged netizen has urged city residents to avoid seeking services at Super Shine Detailing Center – located in Westlands, Nairobi – after its...

A serious glitch in the MPESA transaction is threatening the economy and stability of the country. Though not new, this is the only time...