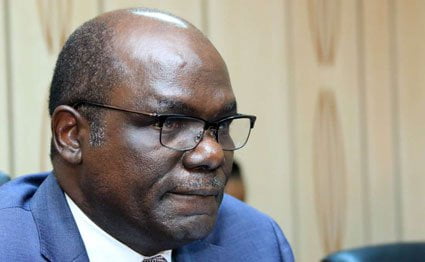 Yesterday, MacDonald Mariga Wanyama was declared fit to vie for the Kibra Member of National Assembly seat on a Jubilee Ticket.

That came after a series of setbacks which culminated in Mariga being suspended for not being a registered voter among other serious issues.

Mariga later showed that he is indeed a registered voter, however, illegally registered past the registration date required before an election is conducted.

His lawyers however managed to convince IEBC that registration is continuous. I don’t have any candidate that am supporting for the Kibra parliamentary seat, but I think the argument by Mariga’s lawyers is just bulshit since as Chebukati thinks, Election laws only apply to voters and not candidates.

One Twitter user put it thus, ‘IEBC: The house of Illegality without blinking’.

Here are some of those comments we sampled on how Kenyans on Twitter (KOT) felt about Mariga’s candidature:

With such a corrupt @IEBC it will be manipulation of votes NOT counting of votes!

I’ve come to realize Mariga has a big following and supporters mostly from Eldoret, Sugoi with those big numbers he’ll for sure win Kibra seat in Nairobi. Makofi

IEBC is a Fraud. No further voter registration was allowed past 16th August, 2019 in Kibra. Ultimately Mariga won't exercise his right to vote in #KibraByelection where he is a candidate because that's a constitutional illegality. #FailedIEBC #DisbandIEBC pic.twitter.com/bYJI1jrkl4

Mariga's admission into the Kibra by-election race has got very little impact on @EliudOwalo quest for Kibra leadership as regards to ODM and Raila"s sympathisers. However, it's time for ODM to re-everluate their so called handshake and their engagement in uhuruto's government. pic.twitter.com/d1GGf4TWJO

If You Think You're More Jubilee Than MARIGA…Have Valid driver's license, You Participate In Every Election , Your Documents Are Clean. Ask Yourself Why Did Uhuru Kenyatta & Jubilee Party Bless Him To Run For That Post And NOT You!

DID MARIGA FORGE HIS AGE DETAILS?

I think my party @JubileePartyK needs to confirm whether Mariga did forge his age details.

If he did we cannot honestly support his candidature. It will cost our country too much in the long run – whether he loses or wins. pic.twitter.com/BXsz1YumU7

Why doesn't any Kenyan media hse especially @citizentvkenya organize a debate between the Kibra candidates and let @HusseinMohamedg moderate this debate. McDonald Mariga to tell us what he'll do for the people of Kibra. So does Imran Okoth and all the other candidates.

Mariga has never voted or saw the importance of voting,now he wants fellow Kenyans to vote for him. pic.twitter.com/jG1wA0a9ge