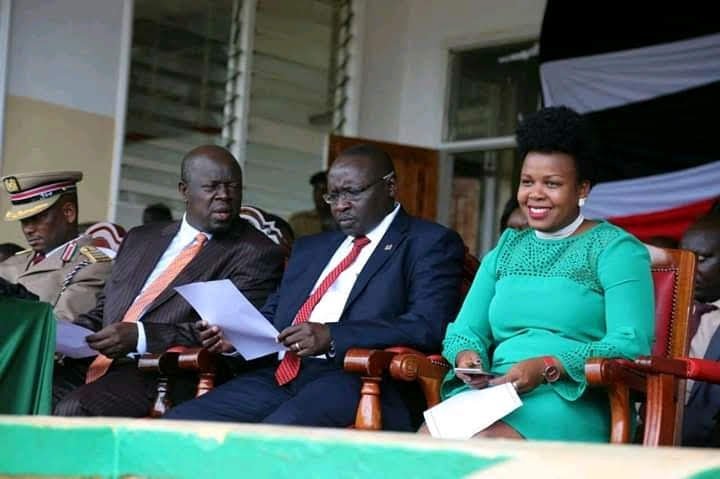 Kenyans on Twitter (KOT) have Tuesday morning gone to Twitter to expose corruption, mismanagement and underdevelopment at one of the most diverse yet little known counties.

Trans Nzoia County has been recently on the news/ social media for all the wrong reasons.

Cnyakundi.com has exposed more about the corrupt dealings at the county which Ethics and Anti-Corruption Commission (EACC) detectives have been bribed to look the other way.

The first Lady Lydia Khaemba is the criminal gang leader who uses county coffers like her own bank. She looted the Trans-Nzoia Women Sacco and it is now emerging that through her personal account 0111804526600 held at a local bank, is where she hides looted public funds.

Riders in the county who are mostly youth are harrased to pay bribes to the county government. The money ends up in few people pockets.

It is believed that Ombima, a county enforcement officer, Mr Eliud Nabimba, who is the head of enforcement department, and the powerful first Lydia Khaemba made an agreement on fee collection on boda boda that Ksh10m will be going to the county and the other Ksh10m be divided amongst her and Ombima, this is after they agreed on a target of Ksh20m revenue collection.

Apart from employing people who are her Kinmen, who sit all day doing nothing at their workstations, Lydia Khaemba has looted the Women Sacco to its knees.

#TransNzoiaBankrupted Trans-Nzoia is a metropolitan country, however, the governor blessed his kinsmen/women with county job. Enda kwa office ya country utajionea, its like a family meeting, all speaking same language

We have raised many questions about the looting of Trans Nzoia County but the EACC and DCI are not even investigating. We are aware detectives were bribed to not to.

Looting of the Women Sacco

In 2017, the Trans Nzoia Women Sacco has over Ksh22 million.

The Sacco was supposed to offer loans to Registered groups. The initiative was meant to empower registered Women groups by giving them loans.

But instead of giving loans to Registered groups, money is channeled to individual accounts.

On 5 March 2019, The Sacco money, 300K was transferred to Account number 1123827966 KCB Eldoret Branch, account belongs to the County Secretary Pius Munialo. Munialo is among the people involved in looting Sacco.

On 18/2/2017, Ksh1.4 million was stolen by the governor’s second wife Lydia Khaemba. She used this money to buy a Mercedes Benz.

So far the Sacco can’t account for Ksh22 million shillings.

The great Trans Nzoia is literally the most mismanaged county in the country. You just need compare what governor Kachapin did in his first term for West Pokot to what serial wife grabber Khaemba did #TransNzoiaBankrupted

Transnzoia county is ran by an incompetent individual in the name of a Governor. 8 years down the line and the town looks filthy with no development record. @EACCKenya @DCI_Kenya Make Khaemba Accountable. #TransNzoiaBankrupted

This is my home county. The heist in this county is of an unimaginable magnitude. Two terms and yet nothing to show. No roads, water, health care, totally nothing, no gains from devolution. #TransNzoiaBankrupted

If this is the situation Then #TransNzoiaBankrupted We need a clear investigations to be done. Huge amount of money is allocated for this County but There's no Infrastructural development. @DCI_Kenya check on this ASAP pic.twitter.com/FW656Ig8Rq

Kitale town that is supposed to be the headquarters of the TransNzoia Government has turned into a slam. A big slum. Roads right in the middle of Kitale are impassable with huge potholes. People now forced to move to Eldoret. #TransNzoiaBankrupted

In this article:Trans Nzoia County