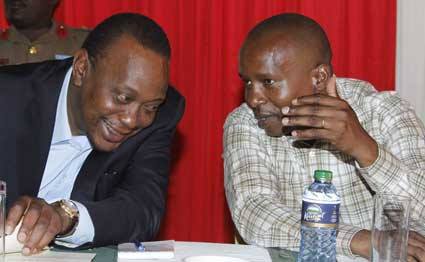 Senate majority leader Kindiki Kithure’s burning political ambition has sharply divided the Mt Kenya East region following his declaration that he is the undisputed running mate of William Ruto in 2022 presidential elections.
Though a newcomer in politics, Kindiki has of late assumed a major role in the Jubilee coalition and national politics positioning himself as Ruto’s running mate in 2022 elections.
The move has however divided the region with others claiming he is a political greenhorn who is yet to mature politically before asking for elevation to the second highest seat in the land.
Although he is known to be close to Ruto, he is Uhuru Kenyatta’s pointman in the Mt Kenya East region. The trouble is that whereas the Meru senator Kiraitu Murungi is now the most experienced politician from the region, he taken a backseat and is just watching from a distance as political events unfold in his political backyard.
Keen watchers must have noticed that there is political enmity between Kiraitu and Kindiki and it dates back to 2013 when Kiraitu announced his intention to be the Jubilee’s Senate majority leader only to be forced to withdraw his candidature at the eleventh hour in favour of Kindiki.
Jubilee was not comfortable with Kiraitu who is the Alliance Party of Kenya party leader which also fielded candidates in the 2013 elections against TNA. To TNA, Kiraitu was a competitor who could not be trusted with such a powerful position.
To show that both Uhuru and Ruto have a soft spot for Kindiki and not Kiraitu, the Tharaka Nithi senator, has accompanied Uhuru and Ruto, to many political rallies across the country unlike Kiraitu who has been conspicuously missing out from rallies in his own political backyard.
His growing influence has elicited disquiet that he is being groomed as a possible running mate to Ruto in 2022 which has received support from MPs Kareke Mbiuki (Maara), David Karithi (Tigania West) and Rahim Dawood (North Imenti). During political rallies in Tharaka Nithi, Embu and Meru counties, the legislators agreed to prepare Kindiki to be the kingpin of the region’s politics.
But what is now raising eyebrows is whether the people of Central Kenya will endorse Kindiki to be Ruto’s deputy. Embu Senator Lenny Kivuti has openly said they will support Uhuru for two terms and asked people from Central region to back a Ruto and Kindiki ticket in 2022.
However, Kindiki’s endorsement for the big seat has raised political antagonism between Kindiki and Kiraitu who is widely regarded as leader of the larger Meru region.
It is being whispered that some leaders from Central region have already shown rebellion against Kindiki’s new move saying Ruto’s deputy should come from Central region and not the Eastern Mount Kenya region. Already, Rift Valley politicians have shown willingness to have Kindiki deputise Ruto but will their Central counterparts agree?
Sources say section of politicians opposed to Kindiki’s endorsement have called for disbandment of the Njuri Ncheke Supreme Council. It is alleged that Kindiki has compromised the elders to endorse him for the big seat.