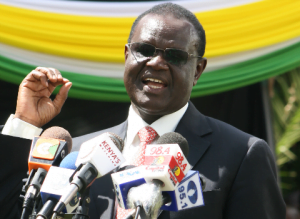 Governor Peter Munya has vowed that the Alliance Party of Kenya ( APK), a member of the Jubilee coalition, will not join the recently formed Jubilee Alliance Party (JAP). The governor, who together with Senator Kiraitu Murungi, was elected on an APK ticket, said the party will not be dissolved nor join the new outfit. “The bus party ( APK) will not agree to be ‘swallowed’. In fact, we are going to strengthen it. We do not want to be part of a plot to return us into the single party era,” Mr Munya said on sunday when he addressed the Press at MCK Mbujo, Buuri. He said APK will resist attempts to join an alliance whose aim is to fight someone he did not name. “We will not join it just to fight others (politically). Kenya is Democratic and we will not join it just to fight someone who is thought to be strong. We are not here to fight anyone. Kenyans will elect the people they prefer in 2017, 2022 and beyond,” Munya said. The county boss said APK has its ideals, principles and manifesto it wants to advance, hence his decision not to join the new alliance. “We want to continue being a pluralistic society that we have been. The tenets of democracy is the multiplicity of parties. Parties bring ideas and help nurture democracy. We do not want to be taken back to the dictatorial single party era,” he added. Munya said in the unlikely event that the bus party joins JAP or is ‘sold’, they will form a new party to advance the interests of the Meru people. “Let me say it in public, if APK is swallowed, we are forming a new party. We will not follow it there. If someone wants to go, they are free to do so and we will not go that route. We want to retain our identity, he said.