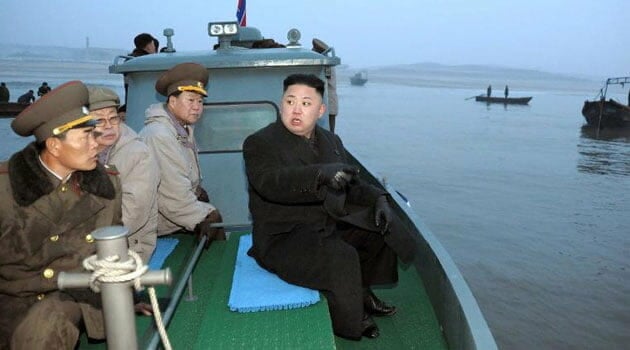 The drill came as tensions grow ahead of an annual US-South Korea joint Key Resolve/Foal Eagle military exercise that is reportedly to start early next month.

Artillery units were among the troops taking part in the drill on the islets of Mu and Jangjae “in the biggest hotspot in the southernmost part of southwestern front”, Pyongyang’s Korean Central News Agency (KCNA) said.

The defence detachment on Mu Islet shelled South Korea’s Yeonpyeong island in 2010 in an angry reaction to a firing drill conducted by the South near the disputed sea border in the Yellow Sea, killing four South Koreans.

Kim Jong-Un in 2012 visited Mu and Jangjae, honouring the troops on Mu Islet with the title of “Hero Defence Detachment”. He made two more trips to the frontline islands in 2013 and threatened to “wipe out” Yeonpyeong Island and other South Korean islands near the border.

North Korea’s top newspaper Rodong Sinmun splashed its front and second pages with a story on Kim’s attendance and related photos showing the firing of missiles and rockets.

“Whenever the artillerymen hit targets, Kim Jong-Un expressed his great satisfaction, saying that they were very good at the concentration of fire and such shell-fire would remove the enemy island totally”, KCNA said.

He called for the entire North Korean army to step up training to “bring the anti-US confrontation to the final conclusion by crushing the enemies promptly in case they pounce upon the DPRK (North Korea), it added.

Pyongyang fired a series of missile tests earlier this month, reflecting escalating tensions ahead of the annual joint exercises by the US and South Korean military which regularly see North-South relations go into a vertiginous tail-spin.

Both sides complain of frequent maritime incursions by the other. The disputed sea border in the Yellow Sea saw deadly clashes in 1999, 2002 and 2009.

The de-facto maritime boundary between the two Koreas — the Northern Limit Line — is not recognised by Pyongyang, which argues it was unilaterally drawn by US-led United Nations forces after the 1950-53 Korean War.

The war ended in an armistice instead of a peace treaty, leaving the two Koreas still technically at war.

He has been urging the military to complete war preparations this year, the defence ministry last week told the National Assembly’s defence committee.