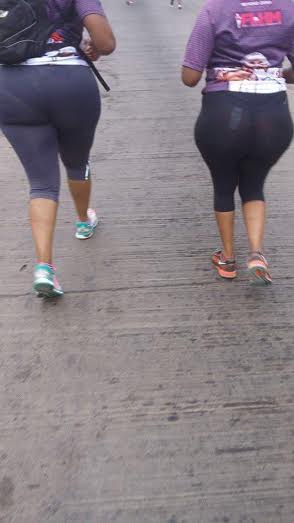 Caption: Some of the indecently-dressed Kilimani harlots who participated in the disgraced “Beyond Zero” marathon.

Various photos are circulating on social media show prominent feminists attending the much discredited Beyond Zero First Lady’s Half Marathon. Alarm bells rung the moment we spotted Esther Passaris, former concubine “clande” of billionaire Pius Ngugi, owner of the “Out of Africa” Kenya Nut Company. Many will remember the high-profile case where Ms. Passaris attempted to extort Mr. Ngugi off money disguised as children’s upkeep and re apportioned her budget in terms of Children’s birthday parties to knock off her expenses.

In her “affidavit”, she said his money was his main attraction, and she admitted that she missed the Monaco holiday trips the tycoon took her to, the kind of life Njoki Chege would want.

Ms. Passaris was the most visible member of the “My Dress My Choice” movement, as she sought to hijack a young lady’s unfortunate incident, to propagate immorality and indecency. Many were of the opinion that the matter should have been treated as a criminal act and tried under the sexual offenses act, but the feminists hijacked it to drive their agenda.

As this was happening, another incident caught the eyes of our vigilant anti-corruption activists on twitter, who noted the most bizarre happening of the bogus “Beyond Zero” marathon.

In August 2014, A mobile clinic truck was donated by First Lady Margaret Kenyatta in her Beyond Zero Campaign to Samburu County. Addressing residents, Samburu Governor Moses Lenolkulal thanked the first lady and said “The people of Samburu have suffered for a long time.” This story was all over the Kenyan media and many Kenyans thanked the first lady for helping Samburu County.

The governor, in 2015 July was quoted saying “We have an acute shortage of qualified personnel, leading to avoidable infant and maternal deaths. We will ensure that the vacancies are filled,” adding that they also lacked facilities in many hospitals

Shock! Two years after the first lady donated a mobile truck to Samburu County, they have now “reciprocated” by donating a Mobile Clinic Truck worth 16 Million to Support Margaret Kenyatta’s Beyond Zero Campaign. The Vehicle was handed over on Sunday by the Samburu County health executive health officer Ms Mary Ekai and the Governor’s wife Mrs Lilly Lenolkulal.

The ass-kissing fuckery plus corruption is on epidemic-level ladies and gentlemen. The First Lady’s supposedly “noble” project has become an enabler and facilitator of corruption, with such counties contributing to earn PR points instead of using the funds to support initiatives in their arid county.

This is stuff meant for the movies. This is nonsense x 1000!