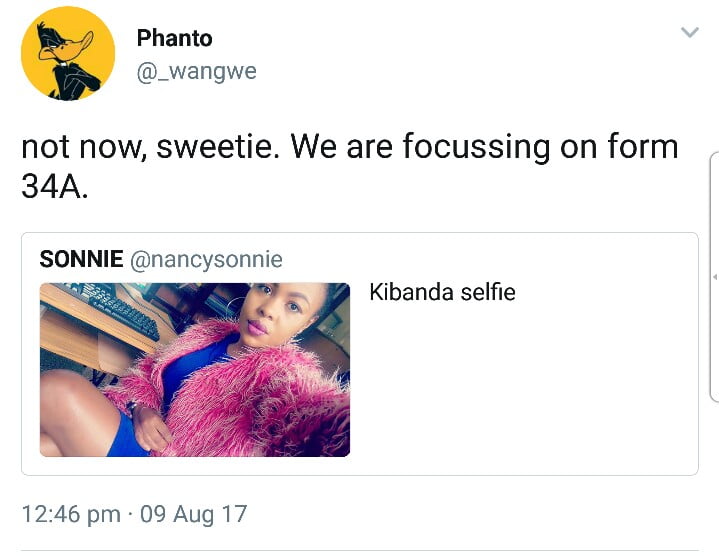 CAPTION: How it all started today. The first glaring contradiction was taking a Kibanda selfie, in somewhere which is clearly not a Kibanda.

Never before have females been so brazenly mercenary as today’s “liberated” woman. Feminism, which masquerades as a philosophy which would celebrate character over materialism, has become nothing more than a license to exploit men. So-called “liberated women”, haughtily waving the banner of “equality”, sneer at men with average earning power, and scorn them as “losers”, because these men have nothing to offer them. But this is not the case. Today’s feminist wants to earn her money, and keep it, letting her partner pay all expenses. For these women, “equal rights” means rationalized greed.
It started off as an innocent Attention-Seeking tweet early Wednesday (9th) morning, where a lady posted a selfie trying to appeal to men’s sexual fantasies of meeting an uptown chic who still has a hint of ghetto in her. As usual, and like most Kenyan chics do on social-media, she was garnering for likes and retweets, but suspiciously on a day when emotions were running high following disputed General Elections results.

Termed as the Twitter relay of the century, the incident evoked memories of late night Twitter, before the precious app was invaded by politicians, pay-to-trend online warriors, feminists and #ImelaWednesday prayer-groups, where Kenyans would immerse themselves in joyful abandon, engaging in humorous but real-talk.

It turns out that the lady in question is a professional scammer who has made many a man sleep in the cold hard cells of Kenya Police, after being arrested by the Banking Fraud Investigation Unit (BFIU). You see in Kenya, if you steal from the banks or institutions which fund political campaigns, you are treated as a worse criminal than Anne Waiguru, who is sitting pretty waiting to execute Round 2 of her NYS heists in Kirinyaga County.

The lady by the name of Nancy Sonnie has already protected her tweets, perhaps fearing that her game has now been uncovered after years of using photo-filters and flirty-vybe to snooker men into her mix. She had three men arrested for Bank Fraud and they have been harbouring it inside till today. 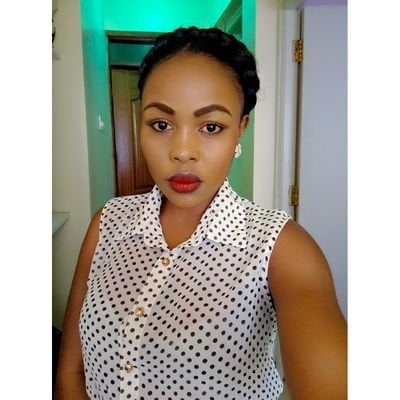 CAPTION: Nancy Sonnie in the flesh. It was this face which attracted men of weak flesh into falling prey to her trickery.
Twitter User Eric Mocha’s story is perhaps the most interesting.

According to Eric, Nancy Sonnie had been in his mentions a few times so when she followed it wasn’t a new face to him. She used to reside in Roysambu so TRM was the staging area for many a coffee dates and lunches. After trying to solicit money from him like every Nairobi woman does, he opted to give her stories a wide-berth.

A few months later, Nancy reached out to him with some fake story how her “dad” needed to wire her money to start some fictitious business. But trick was that she wanted someone with an Equity Bank account to facilitate quick transfer. Indeed, the money was wired to the tune of Kshs. 1.7Million, but it was days later when Eric noticed his ATM access had been blocked, that followed up from the front-office on the reason. Turns out that the funds in his account had been wired from inside the bank, by someone who had hacked the bank’s system. Similar to how Jubilee has hacked the IEBC system allowing them to manipulate the election outcome.

Twitter user Mannheim was equally tricked this time by Nancy’s brother into getting the money wired into his account. The trick was to withdraw the money from an Equity Agent and during odd hours because there was less risk of detection. The so-called “brother” plus Nancy wired him different amounts separately from the source of the hacked funds in the vulnerable computer system procured by Equity Bank.

Both were locked up at Railways Police Station.

Twitter user Ndonga underwent similar tribulations at the hands of the brutal Nancy Sonnie and was picked up by the police unit, which by now had become familiar with the lady.

Others luckily escaped the brutality, for instance Brian Mbunde was curved with the typical rudeness that Nairobi women exhibit once they realise that you don’t have the financial grip to meet her insatiable desires. Another Twitter user Mutuku was once forced to hang with her at a “birthday” in Persia also located at TRM where they consumed his entire rent for a month, in one night. 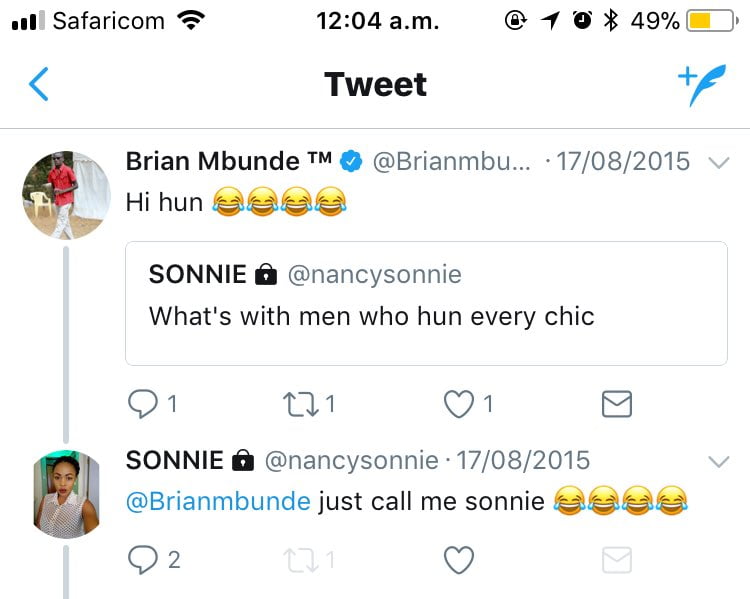 CAPTION: Brian Mbunde dodged this bullet, otherwise he’d have also been a statistic.

As a side-note, any woman celebrating a birthday at a public establishment and not footing expenses, is a thief of the highest order. What Nairobi women do is invite friends for a “birthday” and then ambush them and forcing them to foot the bill. In the meantime, these women will take numerous photos to post on their social media accounts, partying at boy-child’s expense. Instead of these women being reasonable and having their birthday parties in-doors, and asking guests to BYOB, they simply derive pleasure from fleecing men. 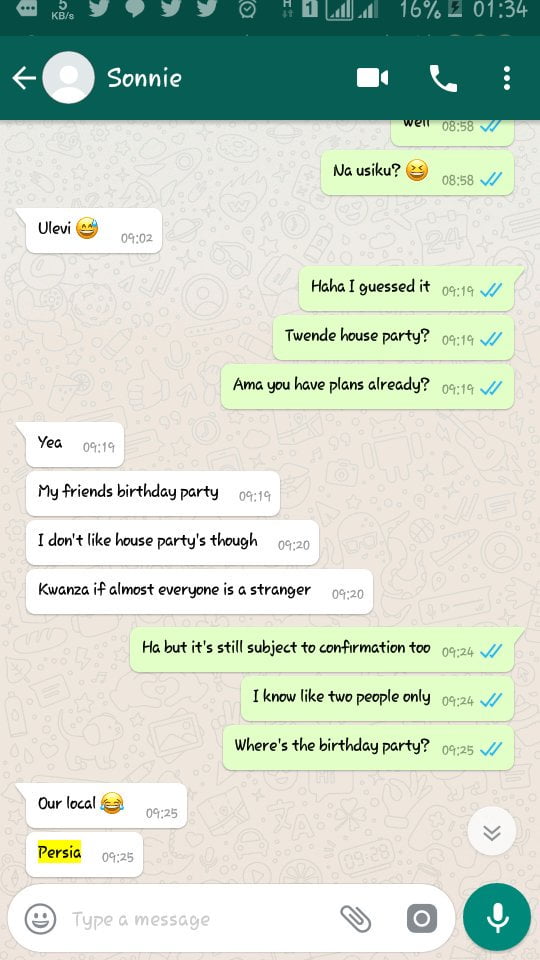 CAPTION: Conversation between Sonnie and another male target. Luckily, our friend got an L for lack of financial resources.

And us men, being the idiots that we are, have constantly taken the bait, to fund these women’s narcissistic desires, and made to feel bad when we ask for sexual-intercourse in return. Their greed and narcissism is sanctified while our sexual desire (borne out of natural hormonal impulses) is treated as criminal.

We were shocked recently to see a woman spiking a gentleman’s drink, yet this has been the routine occurrence countrywide with nearly half the male population in the country falling victim. The vice has become entrenched because men suffer in silence and ladies rarely get harsh treatment for what is literally attempted-murder. Should judges continue dishing soft treatment to such criminals, we should take the law into our own hands and lynch the next women who we find drugging men.

Women who talk a big game, who tweet a dichotomy of “standards” and anti-male sentiment are dangerous psychopaths that must be shunned at all costs. For instance, there is this lady on Twitter going by the name @HerJamila and morning till evening, she posts anti-male sentiment, strategically meant to attract a different breed of man who can afford her standards.

CAPTION: Be wary of ladies who fling such anti-male rhetoric. These are latter-day prostitutes using this lingo to attract high net-worth individuals.

Unlike her more ethical sisters, the street prostitutes, who deal in honest transactions, the average Kenyan woman like @HerJamila trades sex (or more often the promise of sex) for gifts and entertainment and a lifestyle. Her body is simply a tool to get what she wants from men, an impersonal device designed to extract maximum profit. She makes sure that men are trained to respond properly when she wields the power of this tool: that they enslave themselves to her and pamper her like a princess just for the possibility of sexual fulfillment. Again, she wants to achieve her goals with as little effort as possible.

The average Kenyan woman who waxes lyrical on “standards” or her “financial independence” is a whore. Her vagina is a business, and this business is extortion. Her most cherished goal is to live at a man’s expense, to luxuriate in a life without work or responsibility. To this end, she deliberately seeks out men with large incomes or with resources adequate enough to warrant exploitation; all other males are rejected as “losers” or “friends”. Very early on, she learns to control her emotions and especially her sexual appetites, innately understanding that desire suppressed today can fetch an inflated price tag tomorrow.

She learns to package herself as sexual bait with provocative clothing, perfume, lipstick, and make-up. By exerting her sexual power over men, she commands their psychological control, and so she can easily manipulate them into giving her what she wants most: money. The more physically attractive she is (or thinks she is), the more she is able to choose a lover with substantial enoughresources to satisfy her whims. She sells herself to the highest bidder she can attract.

So if a man spends his money on a woman, he wants sex in return, as naturally he should. But the woman, as we’ve seen, often fails to comprehend the logic of this scenario. She feels that no bargain has been broken when she allows a man to take her out, and then refuses to sleep with him, even though she has used her body and her femininity to lure him into wanting to spend time with her in the first place. She suffers no guilt or remorse or sense of debt when she flirts with men to buy her drinks or gifts. Such behavior is a flagrant abuse of sexual power, and women are such masters of duplicity that they have even manipulated men into feeling guilty for demanding a proper sexual payment.

Dating and courtship have become nothing more than a con game sanctioned by society, a society controlled, of course, by women.

Slowly women are beginning to brush away the wool the feminists have pulled over their eyes. What women are looking for now is a way out of the prison their greed and self-indulgence has built for them. What they want is the cozy life their mothers led. They are tired of working and want to be taken care of again. You’ve come a long way, baby, only to arrive back at the starting point, but it’s too late. By usurping men’s jobs, by blatantly stealing men’s money, by arrogantly abusing their sexual power, women have killed the goose that lays the golden eggs. Disgusted by female behavior, men are finally wising up. A backlash is coming which will shake society to its foundations. The winners will be men, who will finally be free of the shackles of female domination. Women will be the losers, casualties in a senseless war they waged against nature itself.