Cabinet Secretary for Energy Charles Keter has told the Senate Committee that Kenya Power is in serious financial turmoils and only surviving on short loans and bank overdrafts.

Keter said the country’s only electricity retailer needs urgent financial assistance to remain in business arguing that running on short-term loans is unreliable.

“We are in talks with the National Treasury and other financiers to support the company and ease high debt obligation. Those short-term loans are expensive. They are not sustainable,’’ Keter said.

The CS also to told Ephraim Maina led committee that Kenya Power is in talks with the World Bank and African Development Bank to buyout the short-term debt of Sh102.6 billion in exchange for longer term loans.

Keter and the firm were put into task to explain the damning nature of the loans with some lawmakers like Laikipia’s John Kinyua calling for Kenya Power be put under military administration like the Kenya Meat Commission, police and parastatal choppers.

“It is painful to learn that the sole power utility is operating on an overdraft, despite charging consumers heavily. This is unacceptable,’’ Senator Ledama Olekina said. 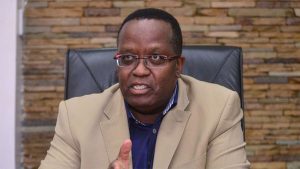 Kenya Power boss Bernard Ngugi said most of their debts are in commercial and dollar-denominated and interest of 6.5%.

“We have a commercial debt of up to Sh65 billion, charged an average interest of 4.5% and a LIBOR of 2%. The rest is shilling denominated one from local banks charged at 12% per annum,’’ Ngugi said.

Libor is the rate of interest used in lending between banks on the London interbank market but also used in setting the interest rate on other loans.

Lawmakers argued that interests charged are expensive and asked Kenya Power management to look for other sustainable modules to service the loans.

The loss has been blamed on increasing non-fuel power purchase costs which rose by Sh18.1 billion to Sh70.9 billion, from Sh52.8 billion in a similar period two years ago.

Increased costs as a result of continued use of short-term facilities or bank overdrafts to finance the firm’s operations.

EPRA director-general Pavel Oimeke confirmed said he has received Kenya Power’s proposal but hinted that the decision on power tariff review will be out in six months.

In this article:Charles Keter, Kenya Power, Ministry of Energy