Nandi Hills MP Alfred Keter has made a come back with shots directed at the Deputy President William Ruto for playing too much of a church boy in different churches.

Keter claimed that the DP and his lazy allies are loitering in many churches but belong to no church.

He spoke during the memorial service of Margaret Njomo, mother to Kiambu constituency MP Jude Njomo where he stressed that one doesn’t have to fake being a christian to ascend to top leadership.

“You can go once or two times in an year so that you can show brotherhood or as a good neighbor, but you can not show up in different churches every week every month every year,” said Keter. 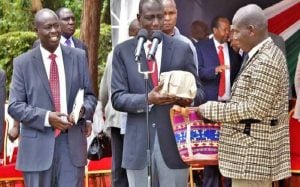 Dp Ruto donating money to a church in this courtesy photo.

Ruto has outshined his peers in playing church politics, he crosses the country to attend different church functions.

He also contributes a lot to the churches and he vowed never stop ‘standing’ with the religious organizations and the youth so critics can yell.

When the DP spoke from his Sugoi home last friday, he emphasized that he is not apologetic of his faith and he is not ashamed of his God.

The DP who has curated his politics around churches like the Former Late President Daniel Moi also sympathized with his critics.

“I sympathize with those who keep on complaining about my giving in churches, going to the church as well as helping youth and women improve their lives. Does it mean they don’t have something else to do?” he asked.

Some clergymen from the North Rift expressed their support for Ruto’s donations, saying they need those hand outs.

They were led by Bishop Simon Kemei who said the handouts given them are cleansed and sanctified, they don’t dig into the source.

“We are very happy with what the DP is doing for churches because we believe he has been touched by the hand of God to see the need of the church and use the resources available to him so he can intervene and help,” the bishop said.

Ruto’s rival Raila Odinga and his allies have constantly questioned the source of DP’s huge donations.

“This man is giving more than he earns, where does he get the money?,” Raila posed.

The Dp has also maintained his repeated response, stressing that giving is a personal initiative, so people should not question.

“If they don’t want to give in churches or help the youth, then they can do something else instead of criticizing what I am doing. They should not be bothered with what am doing.” Ruto said.