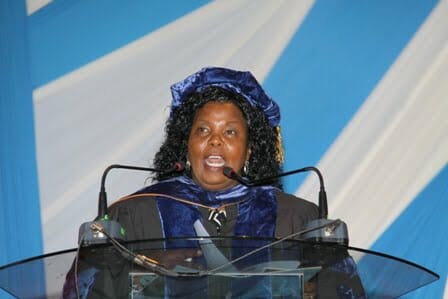 After being directed by the Labor relation court to proceed on a Six months terminal leave pending hearing a case Lodged by Activist Okiya Okoiti Omtata, KU Vice Chancellor Olive Mugenda has said she is going nowhere .

On 1st December 2015, Kenyatta University was served with a petition by Okiya Omtata seeking the following

In a paid advert in one of the local dailies, Kenyatta University says that they have been advised by their advocate that the advice is not a court order . Kenyatta University also laments that it beats logic as to why the court advised that the Vice Chancellor proceeds on leave while the issue of her being replaced by a caretaker committee is pending hearing and determination .

Kenyatta University says that its council regrets the advice given by the court and affirms that after considering the  court advice, it turned out to be inappropriate. The Council insists the VC Olive Mugenda is in office Legally and in View of the major projects and initiatives that are ongoing in the meantime, her attention is needed to complete the projects.

The University council also states that it awaits  receipt of the court ruling and order and will meet to consider the next course of action after receiving the same.

Meanwhile the Kenyatta University Council has directed the Vice Chancellor to remain in office and continue with her normal duties .