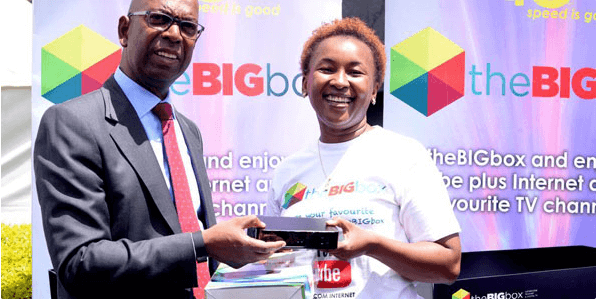 Safaricom’s Sylvia Mulinge’s name is missing from a list of more than 400 names whose work permit applications have been processed by Tanzanian authorities, the editor of this site can confirm. Sylvia Mulinge was appointed the new managing director for Vodacom Tanzania effective June this year.

It has been three months since she applied for the work permit. We tried to call the Tanzanian authorities but they never picked calls. one official replied to our text message saying ” Sylvia Mulinge’s matter was a non-issue”

Vodacom is Tanzania’s leading mobile service provider with over 12 million customers as of September 2017. It is a subsidiary of United Kingdom Vodafone Group which also owns 40 per cent of Kenya’s most corrupt company, Safaricom.

In his usual blurbs and bragging antics, Bob Collymore said Mulinge will be taking over from Ian Ferrao as a managing director. Ferrao had been heading the unit since 2015.

The rejection of Sylvia Mulinge as Vodafone stems from her case where she is accused of murder and her integrity has been questioned by Tanzania authorities.

On First of February, 2015 Sylvia Wairimu Njugua Aka Sylvia Wairimu Mulinge was the driver of the motor vehicle registration number KBU 483M, A Toyota Prado, Along the Southern-By- Pass in Nairobi when she negligently drove, managed and/or controlled the said motor vehicle and caused it to hit Mary Kusa Etale (Deceased) who sustained Serious Injuries.

Mulinge was drunk, speeding and carelessly driving on the material day. Mulinge’s murder case was picked up by the office of the director of public prosecutions Keriako Tobiko but the case later died after Safaricom used their financial might to influence the case.

Sylvia Mulinge was also mentioned in the Safaricom KPMG exposes where she had influenced Safaricom tenders especially the Cashless matatu payment tender, that later backfired.

Word has it that Safaricom and Kenyan officials are seriously lobbying and money is expected to change hands in order to give Sylvia Mulinge work permit to save her and Safaricom the shame.