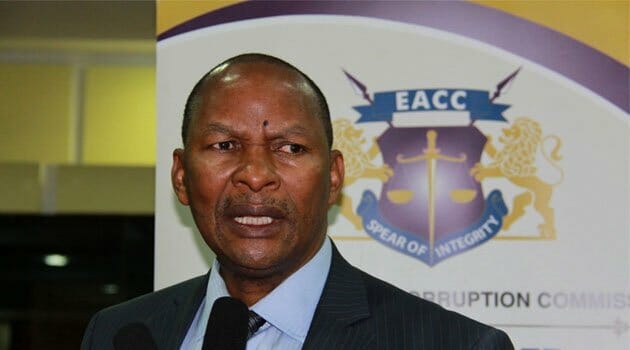 Intrigues at the Ethics and Anti-Corruption Commission took a new twist on Wednesday when it was established that the commissioners were planning to discipline chief executive Halakhe Waqo.
Sources say the commissioners held a series of meetings on Tuesday to build a case against Mr Waqo.
The chief executive could be required to step aside for some time or write a letter showing why he should not be suspended.
Mr Waqo differed with EACC chairman Mumo Matemu on the suspension of Deputy CEO Michael Mubea from the commission for 30 days.
Although Mr Mubea reported to work on Wednesday, officials at EACC told the Nation that he had been given the day to clear and hand over files to the commission.
Mr Matemu said the decision on Mr Mubea was final and investigations into his integrity had begun.
The goings-on at EACC have elicited reactions from civil society and the Central Organisation of Trade Unions.
On Wednesday, a grouping of policy campaigners under the banner of the Parliamentary Initiatives Network said controversy surrounding the management at the commission would derail the fight against corruption.
“The integrity of EACC must be above board. Wrangling will compromise the war against corruption in Kenya,” Mr Samuel Kimeu, the Executive Director of Transparency-Kenya told journalists.
Mr Matemu defended the decision to suspend Mr Mubea. “It is one person. The commission has about 400 workers,” he told Nation FM.
Cotu secretary-general Francis Atwoli said the EACC had underperformed and asked the President and Parliament to disband it immediately.