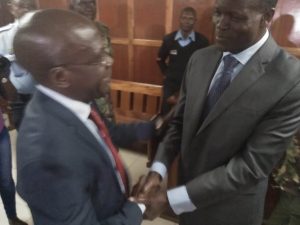 Boni who was present at the Milimani High Court this afternoon during Okoth Obado’s bond application hearing tweeted that he had gone there to stand with his “friend” Mr Obado who is being trialed over the murder of university student Sharon Otieno.

Khalwale becomes the first politician to publicly show his support for the troubled Migori governor and minutes after the post the comments section was already flooded. Some felt this was a wrong move while others expressed their support to the former Senator and added that they felt Mr Obado was innocent.

Did you stand with Sharon's mother also?

Birds of the same feather flock together.

You must be an accomplice in the murder

Mtetezi you always on the wrong side unafaa uchunguzwe pia .. you talking nonsense how will justice prevail in the villages by surporting a killer 🤔

Obado is innocent until proven guilty! Kudos for the support

Thank you for standing with him .

The ruling on Obado’s bond application has been set for Thursday and he will have to spend two more nights in remand.