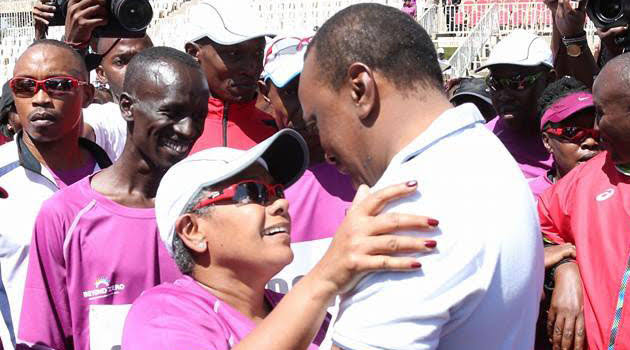 CAPTION: First Lady Margaret Kenyatta and Uhuru Kenyatta during a past Beyond Zero Marathon

Kenyans have expressed their intention to boycott this year’s Beyond Zero Marathon with many viewing the charity run as a pointless PR stunt by First Lady Margaret Kenyatta.

Several Kenyans have been quoted saying they don’t see the point of going for the run since a lot of corruption in the Ministry of Health, which the run seeks to raise funds to improve, has been linked to members of the Kenyatta family.

Others expressed their disappointment in the fact that many Beyond Zero clinics purchased through funds raised in previous marathons are no longer functional.

Recently, the government has resulted to bribing top Kenyan media houses to try and force the campaign on Kenyans who are clearly no longer interested in participating in the run.

Media personalities like Sheila Mwanyigah are simply in it for the money. None of them gives a shit about Kenya’s broken health system but they pretend to care.

As one of the ways to put their message out to Margaret Kenyatta and her husband, Kenyans are planning to show up for the marathon in T-shirts listed with all of Jubilee’s scandals in the last 7 years.

It would be awesome if each of us paid Sh300 for such Tshirts then we line up along the "Beyond Zero" track chanting #SHAME #SHAME #SHAME to the people fueling corruption in Kenya by supporting/paying for #BeyondZero #BeyondShame . You save Sh1700, have fun & shame 'em pic.twitter.com/3TxrRvW2Tp

Sources close to CNYAKUNDI.COM have confidently informed us that security officials in charge of providing safety at the marathon have been having headaches following the threats from Kenyans.