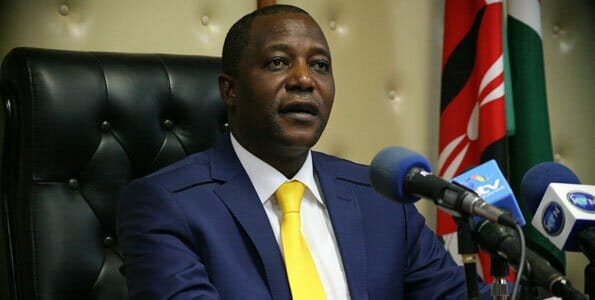 The teachers strike has put one man in the spotlight- Labor cabinet secretary Kazungu Kambi. He has miserably failed to deliver and it is time president Uhuru stepped in to sort out this Mess, that he created . How Kambi was vetted and cleared by parliament has been giving  many peace loving Kenyans sleepless nights . It has always been said and documented that Kambi is the most corrupt Cabinet Secretary in the Jubilee government. That is indisputable.

In August 2014, Kazungu Kambi was dropped from president Uhuru’s entourage to USA on grounds of corruption. This was done in the eleventh hour after it emerged that corruption, which Kambi is deeply embroiled  in would take center stage in the summit.At one time, Kambi was under siege for removing workers and employers representatives from the NSSF Trustees . This man has been focusing in useless wars instead of delivering . During the Lamu Land saga, that the Kenyan media has generously ignored, Kambi’s name featured prominently . He held a press conference and de-linked himself from any form of land grabbing but  admitted that Orengo had revoked his title for a 1o acre land along Jogoo road Nairobi from Kenya Railways which he allegedly paid for in 1998

Kambi’s name also features in the illegal acquisition of a Ranch in Lamu. African development bank is after him for failing to service a loan. If that alone is not enough, Kambi is also accused of securing another 258 million loan from Africa development bank and used the 60,000 Giriama Ranch as security. He promised to repay this loan but refused to comply. It is rumored that ADB went to the ranch to auction it but the directors said they were not aware of the loan.The loan has accumulated to 2.6 Billion. Shockingly, this man was cleared by Parliament which has always acted as a rubber stamp nurturing and promoting impunity.

Kambi has always been accused of issuing bouncing cheques .Riva oil company associated with Kambi  at one time issued a bouncing cheque and was closed down without notifying them. August Last year Citizen Newspaper Reported

According to those in the know, Kambi was one of the flamboyant newcomers when he entered into parliament but as time went by, Ire started begging when loans payments deals started haunting him. Kambi had defaulted in repaying multimillion loans and his companies were being auctioned. At one time,he had to be holed up in a house in Nairobi South B occupied by a girlfriend who started
maintaining him. When she could not continue to give a helping hand, she threw out Kambi at wee hours of the night on grounds he was a liability. Kambi had to sell his Range Rover vehicle to make ends meet. “” End of Quote

Just the other day, Kambi was mentioned as one of the people who pocketed millions in the construction of the 40- storey hazina trading centre that was awarded to the Chinese in a controversial deal.

Kambi’s name has also featured in the controversial Tassia II housing project that was offered to the same Chinese Jiangxi company. The original cost of the project was 4.6 billion but was miraculously inflated to 5 Billion .

According to Jubilee’s confused political kitchen, nobody knows where Ruto got this man from . But they were buddies during Moi’s 1992 YK . The TNA part of the Jubilee government is not happy with him because he is soiling their ” Reputation ” In quotes because they have no reputation to protect. When you ask me how this man is a Cabinet secretary, the silence is deafening . And by the way someone went to court to challenge his academic credentials . My question is, Is this the man who can sort out the teachers crisis ?