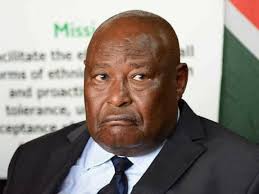 Kenyans have referred to the National Cohesion and Integration Commission (NCIC) as partisan in reference to the distasteful comments made by Sterehe Mp, Jaguar but no action taken against him.

A few days ago, the commission was quick to issue a statement condemning Blogger Robert Alai after he shared a photo of dead Kenyan officers bundled in a vehicle like charcoal.

Two years ago, The controversial Kaparo-led National Cohesion and Integration Commission (NCIC) had the term of its commissioners extended by President Uhuru, a move legal experts term as illegal.

Apart from engaging in fearmongering and staging political arrests, the dubious commission has failed to hold the regime accountable on ethnic exclusion, which is among the key mandates of the commission, and which continue to cause the national fragmentation being witnessed with the country increasingly getting polarized along ethnic lines.

The commission always comes to life only when it is required to torment critics of the government through staged arrests and choreographed prosecutions.

Led by KANU era speaker of the National Assembly Francis Ole Kaparo and filled with regime friendly sleuths, NCIC is seen by many as a tool to harass and intimidate critics of the present political order under the guise of legally sanctioned prosecutions.