This Sunday as Kenya faced off with Ethiopia there was a rare sighting in the stands. Dennis Oliech, the man who carried the team to our last AFCON qualification back in 2004, was watching the game together with the commoners. 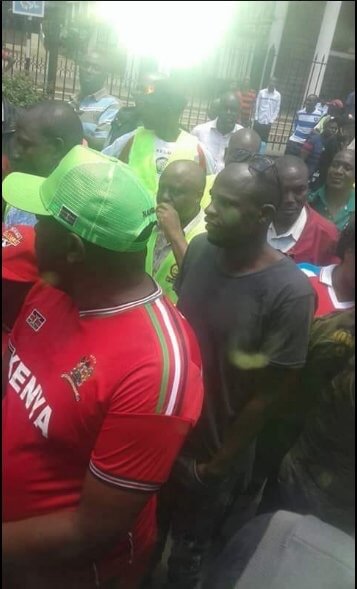 Caption: Dennis Oliech Queuing Up To Watch Kenya’s Game At Kasarani On Sunday

This has left many Kenyan football fans furious as they questioned why the football hero was not accorded VIP treatment by the sports ministry led by the confused wanker Echesa.

Instead, crooked politicians like William Ruto, Kipchumba Murkomen and Moses Kuria that have looted and plundered this country were given special seats at the VIP section in Kasarani.

Oliech’s mother, Mary Auma Oliech known to many as Mama Oliech passed on at her Lavington home on the night of Friday, July 20, while recuperating after treatment and the event took a heavy toll on Oliech.

Mama Oliech was fresh from France where she was receiving treatment for gastric cancer since 2014. Apart from the stomach cancer, she also had cardiac tumor which was also being treated at a French hospital.

In 2014, Oliech spent about KSh 23 million in medical bills for his mother even as the public criticized him for his standards of living, many suggesting that he had wasted all the money he made during his footballing stints at top clubs in Europe.

Mr Oliech’s story is a clear picture of how sporting legends are treated in this country. Many languish in poverty despite having carried the nation’s flag high during the peak of their careers as the same government that cheered them on then watches in silence.