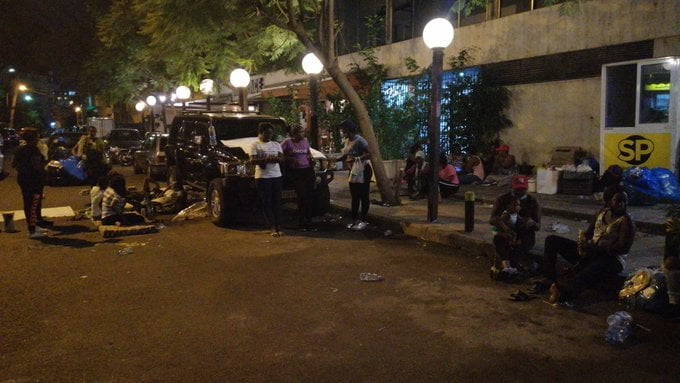 CAPTION: Images doing rounds of Kenyans stranded in the streets of Beirut, Lebanon: Since the deadly explosion last week, most have been rendered jobless and homeless

For the last week or so, hundreds of migrant domestic workers in Lebanon have been holding protests in front of their respective consulates in Beirut, seeking immediate repatriation to their countries of origin.

Among those afflicted is a group of Kenyan women and children who recently found themselves stranded on the streets days after an enormous explosion tore through Beirut, leaving at least 171 people dead, thousands injured, and the nation in political limbo.

With no work, nowhere to live and no means to get back home, the community mainly made of domestic workers and casual labourers has been left no option but to camp outside the infamous Kenyan consulate in Beirut with the hope that diplomats might somehow come to their rescue. 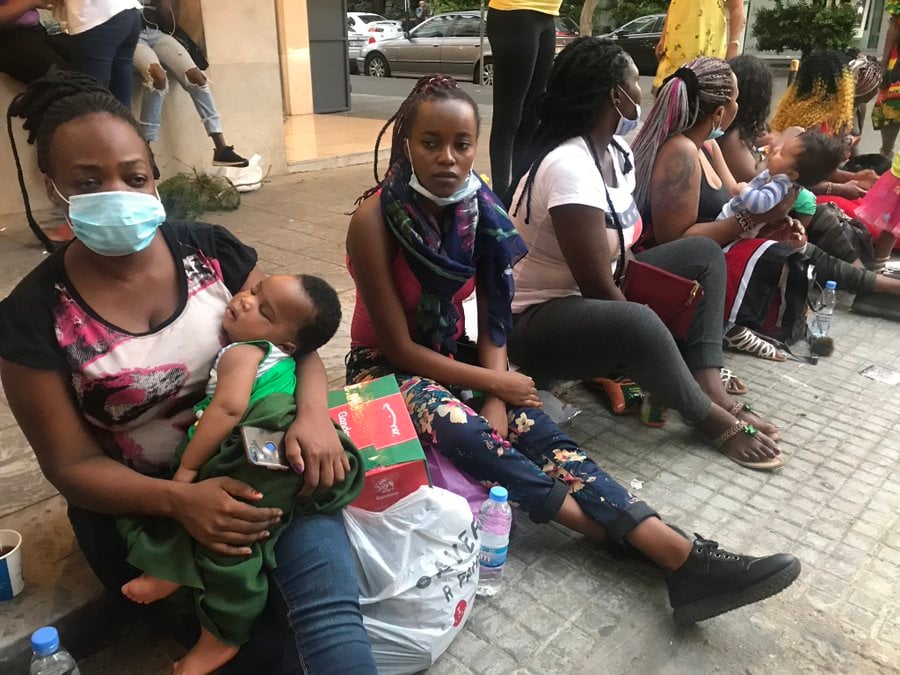 A viral image of a group of Kenyans camping outside the consulate in Beirut: They say diplomats are yet to offer any kind of assistance

In the last week of July, the Kenyan government said it would send officials to Beirut on a mission to assess reports of mistreatment of Kenyan women who seek help at the consulate in Lebanon.

This was after the CNN published a story days before, detailing accounts from a number of Kenyan women who claimed that the Kenyan Honorary Consul in Beirut — Sayed Chalouhi — was notorious for physically and verbally assaulted them, as well as overcharging fees.

They also accused Lebanese national and Sayed’s assistant, Kassem Jaber, of pressuring them to pursue sex work in order to come up with the money for repatriation fees.

On Tuesday, activist-turned-politician Boniface Mwangi shared an amateur video where more than ten Kenyan women cried out to be homeless and not in a position to return back home.

One of the women in the video clip claimed that while other countries were already getting their citizens out of Lebanon, no help whatsoever had been sent to them.

Kenyan domestic workers in #Lebanon #Beirut are begging to be repatriated. They were thrown out of their places of work without their pay. They don’t have money to buy air tickets. Video received via WhatsApp from one of the workers. @ForeignOfficeKE @StateHouseKenya #SemaUkweli pic.twitter.com/WGt08xKpqs

It is estimated that about 1,000 Kenyans work in Lebanon, mostly as domestic workers with most being undocumented migrants who work in a bonded system known locally as “Kafala”.

It requires all unskilled labourers to have local sponsors who must vouch for their visa and employment status.

Kenyans back home are now calling on the Ministry of Foreign Affairs to work with the relevant consulates and embassies to assist those documented and undocumented migrant workers who wish to return to their country to do so as soon as possible.

Be sure to check back to cnyakundi.com as we shall be closely following this developing story and feed you subsequent updates.