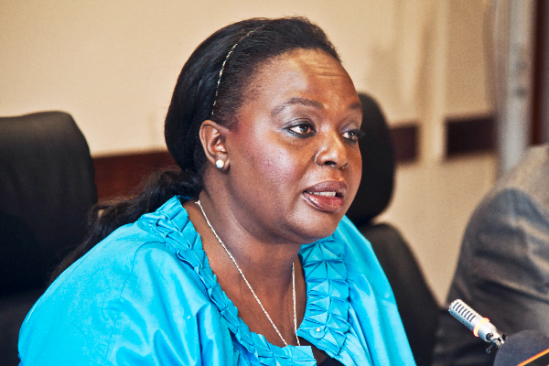 CAPTION: Raychelle Omamo the alcoholic who authorised purchase of bogus APC’s that don’t even have spare-wheels, simply because she thinks she’s close to Uhuru and can get away with that kind of bullshit.

Congratulations Kenyans! You must be the dumbest species on planet earth. That even after the Auditor General’s report highlighting the fact that the recent acquisition of Armoured Personell Carriers was fraudulent, and the APC’s faulty/defective/third-rate, Kenyans don’t seem bothered.

It seems like it’s just another day in the office for mainstream media journalists and editors, soliciting bribes from Government officials and corporate thieves in-order to obscure the truth from Kenyans.

The Ministry of Defense headed by alcoholic Raychelle Omamo awarded the contract Ref. No. MOD/SYS/029/2012/2013 to a firm through direct procurement, at a contract sum of USD.51,584,235.00 on 15 October 2012.
The Ministry accepted that it used direct procurement method because APCs are Security items and are not ‘off the shelve’ items and therefore, have to be tailored and manufactured as per specifications and that the contracted firm is the only entity which could supply APCs being procured in accordance with Section 74 (2) (a) of the Public Procurement and Disposal Act, 2005.

There is a reason why the Ministry of Defense fights to conceal their purchases claiming “sensitivity” in the purchase-regime, yet their main intention is always to mask their corrupt activities. Whats so sensitive about buying bogus equipment which endangers the lives of Kenyan service-men and women in the line of duty? Just so that Government officials can get bribes and build flats? This is truly a sick country!

The Ministry of Defense has failed to justify the relevance of the initial purchases which were done through restricted tendering as required by Section 133 of the Public Procurement and Disposal Act, 2005 for procurement of security items, while the subsequent purchases of the same material were procured through direct procurement method. Although, the Ministry has explained that the firm is the only one which could supply APCs and had been tried and tested by KDF for the supply of the same in a UN Mission to South Sudan, the audit observed that the firm had earlier supplied 32 APCs which had numerous flaws and deficiencies, a confirmation that it was more logical to subject the contract to a competitive bidding process in accordance with the procurement law.

The Department of Defense which is the hub of corruption scandals in the country, was ofcourse involved in a dubious deal, buying third-rate APC’s.

The Ministry of Defence headed by the alcoholic woman Raychelle Omamo did not undertake a market survey as required by Section 8 (3) Z of the Public Procurement and Disposal Regulations, 2006 which states that a procuring entity shall carry out periodic market survey to inform the placing of orders or adjudication by the relevant award committee. Instead, the contracted firm, also interested in winning the contract, purports to have established market prices for APCs which confirmed that its bid prices were cheaper.

It is clear that the tenderprenuer who supplied the Ministry of Defense with bootleg APC’s dictated prices of APCs and usurped the role and responsibilities of the Ministry’s staff. The Kshs.3,982,824,974.46 which has so far been paid is in excess of the prevailing market prices, meaning that Raychelle Omamo together with senior Military figures like Julius Karangi who was the Chief of General Staff by the time of purchase, could have pocketed over Kshs. 2 Billion in that fraudulent acquisition.

To read more, read the Auditor General’s report with excerpts on how Raychelle Omamo, Julius Karangi and their predecessors stole money via bogus acquisitions of bootleg APC’s that leak water and don’t even have spare-wheels. That how fucked up those retarded bastards are.