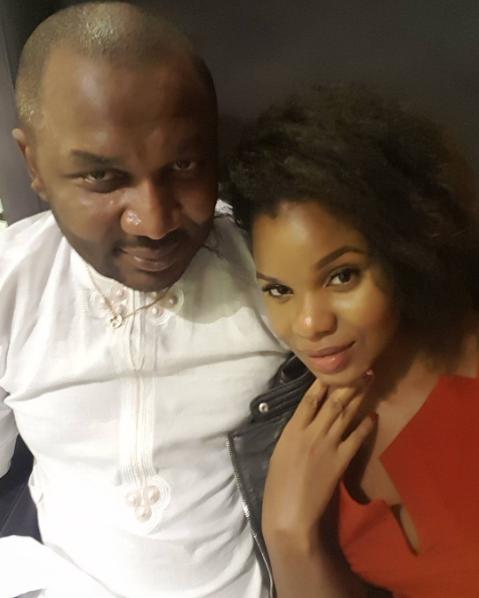 PICTURED: Lisa Gaitho and the Nigerian man who’s over-stretching her vagina and other outlets, the way we know they do. She’ll be lucky if her womb is intact by December. And then some delusional Kenyan dude will be boxed to pay dowry for her beat-up goods. Smh.

Listening to Maina Kageni in the mornings and other misguided talkshow hosts can leave you wondering if Kenya has become an offshoot of Nigeria. Reading the blog authored by Lisa Gaitho, daughter of veteran political journalist Macharia Gaitho portrays an image of desperate Kenyan women, craving for male attention.

Indeed, Nigerian men have emerged as the top substitutes for Kenyan women, who have endured years of conflicting conditioning from novels, mainstream media and ofcourse their parents.

According to a write-up doing rounds on social media, Kenyan women have grown up with dysfunctional relationships with father’s and/or male figures in the early stages of their life. They’ve witnessed their fathers abuse their mothers, some have been victims of physical violence, others have endured sexual injustices from close family members and until recently when Njoki Ndungu pushed for enactment of the Sexual Offences Act, many of these crimes went unspoken.

Mother’s witnessed crimes being committed on their daughters and we’re afraid to confront reality, and instead shielded themselves in churches, compounding the problem even further.

Kenyan women have then grown up disturbed, looking for love and validation in all forms of sideshows. Some have embarked on long treacherous journeys to West Africa in search of their elusive pasts, while many more remain in the country pursuing relations with men old enough to be their fathers, due to the void left by absentee or abusive dad’s.

The country is reeling from shock footage of a lady turning down a wedding proposal at one of Nairobi’s fast-food outlets, even as her fellow lady’s encouraged her but to no avail.

Speculation is life that the reason these younger women are departing from solid functional relations with men in their age bracket, is because they are in sexual liaisons with old men, hitherto christened “sponsors”. The lady in question was widely rumoured to have declined the proposal because she is in relations of a sexual nature with an older sponsor who perhaps caters for her bills.

According to the write-up, older men bring the form of command and brutal yet gentle affection, which they so desperately crave for. Single Kenyan women are incapable of appreciating chivalrous men because they’re out there searching for their father’s, many of whom were perhaps too busy working or had no time to give their daughters. When they’re looking for sponsors under the guise of “paying bills” , they’re actually looking for their fathers. Some of these fathers sexually molested their daughters and so they find themselves seeking such liaisons to bridge the gap that those beastly acts created.

So while media has portrayed the image of a perfect man as one who treats his woman with kindness, politeness and respect, the Kenyan woman craves for a firm, authoritative man, who isn’t in touch with his emotions or thoughts, in a replication of the image of a typical Kenyan Father. Kenyan women have no capacity to appreciate gestures and chivalry and men who embark on that route always end up disappointed.

It’s the case of DJ’s for instance. Despite being the most promiscuous and desensitised lot, they bag the hottest chics in the nightlife setting. Women will pack clubs just to see Creme Dela Creme simply because he had a sex-tape leaked. They all want selfies and autographs from him. Not because recording yourself on film having sexual intercourse is a revolutionary act, but because Kenyan women see their promiscuous fathers in DJ Creme Dela Creme.

CAPTION: DJ’s are in high demand with Kenyan women, despite the fact that they’re not chivalrous. Because Kenyan women, like terrorists, only understand the language of brutality and ruthlessness. Just like America doesn’t negotiate with terrorists, so should Kenyan men stop extending chivalrous gestures to Kenyan bitches.

The ordinary Kenyan woman, be it a college girl or corporate woman is engaging in multiple illicit sexual relationships looking for her runaway Father, something which cannot be cured without extended discourse on the matter.

The rapid explosion of the number of single mothers, whereby these girls not only have relations but bear children for them, is at crisis level. Nobody seems to be talking about this and instead we have retarded feminists like Betty Waitherero projecting feminism and women empowerment as the “art” sleeping with as many men as possible.

The concept of union for progress has been undermined as women seek to define their sexuality by the number of old men they have slept with, not by their intellect, political awareness and economic emancipation. And there is no age-group worse affected than those in their 30’s and early 40’s. These women are still holding onto their single status, and want to live with extended freedoms without responsibilities.

After sleeping in numerous hotels around the country under the guise of “girls nights out” or “roadtrips to unwind”, these women will have their vagina’s decimated and obliterated by penises of different sizes, leading to wear and tear with a possibility of barrenness or destruction of the reproductive organ. After going round many men, they will now use religion and other subduing mechanisms to position themselves as “prime assets” who have a lot to offer any union. Marrying them is like buying a used car from a war-torn country like Congo.

The truth is that women in this age-group have outlived their usefulness and should be shunned by men of goodwill out there, because they come laden with baggage that no earthly being can resolve.

For us to create a paradigm shift, we have to nurture younger women in the twenties, who have still not yet had their brains and vagina’s tainted with sperminal input from older men (sponsors), and to project marriage as an institution that should be safeguarded from these existential threats.

The image of that young girl running away from what seemed like a genuine marriage proposal is representative of Kenyan women who have cross well above their 30’s and 40’s, pretending to be waiting for a more sensible deal. These women want men driving cars and living in big houses, forgetting that their mothers shacked up with their fathers before they could afford those trappings of today’s measure of success. 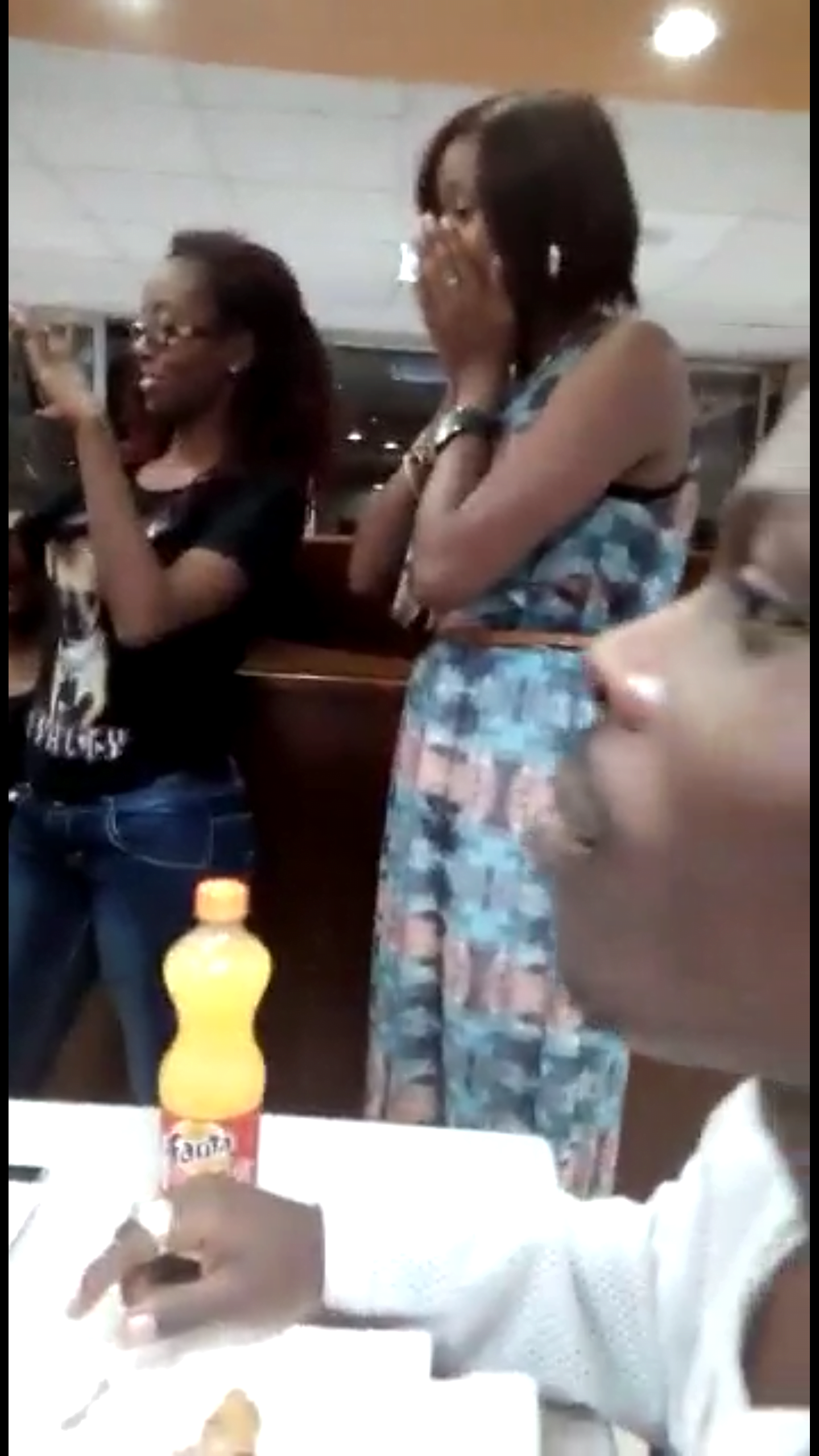 Young Kenyan men basking in the beauty of their dreams and ambitions should avoid these bitter 30’s plus women, who have been brainwashed by the sponsors who sex them into believing that wealth acquisition is an overnight venture. These women will represent their frustrations and bitterness to you as a young upcoming man, by piling undue pressure whilst comparing you to the sponsors who have passed through her sexual organ over time. These are women that should be shunned by any means necessary.

Like that lady who ran away from the proposal, women in the 30’s and early 40’s in Kenya missed the window of opportunity to marry and settle down, because they thought they had so much time. Carol Radull’s husband discovered this when it was already too late when he went to marry a 40-plus woman, simply because she has a husky voice and celebrity job. He didn’t even last two years. Why would anyone want such baggage?

Women over 30’s and 40’s are extremely at risk of barrenness and any man that consciously decides to rock-up with one, should also be ready to suffer the consequences. Let’s leave this misguided lot to Nigerians and other “foreigners” who tickle their fancy, and concentrate on correcting the younger ones before its too late.

Until then, men are requested to immediately cease and desist from spoiling women with chivalrous gestures. No buying flowers for them, or opening doors, showering them with gifts or even proposing to them until we figure out what’s wrong with society. Get your under-20 girl and put her in the house before proposing or embarking on a wedding. Men, stop calling or texting these bitches as if it’s the end of the world. 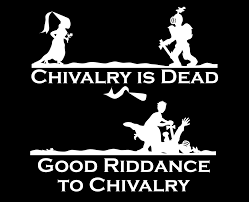 CAPTION: He was supposed to be her knight in shining armor, but she took his own sword and pierced it right through his heart. Kenyan men must respond with equal measure.

Cars must be test-driven by prospective owners so every man has the right to test-drive their woman and see if they can bear children. Women withholding sex from you until the very last minute only means that they want to manipulate your mind with verbal-intercourse, into thinking that you’ve landed a major catch. But these are just basic bitches who’ve mastered the art of deception and positioning of their tired goods as brand new.

Even in America, girls from functional home backgrounds can never sleep with men the age of their fathers. I mean it’s despicable! It’s those women born in the projects, who started being molested from an early age, who end up as strippers, video vixens and the likes. Until we tackle this sudden explosion of “sponsors” and substitutes for husbands with radical interventions like having therapists mandatory in every school, we might not see the end of this.

Remember gents who have your shit together, working in a good job, career, business or hustle, doing your best to make ends meet in the economy which has been ruined by Jubilee, to hold your head high. I know these women in their 30’s will try to belittle your achievements due to the fact that they sleep with sponsors who poison their minds with big-talk, so you’re better off avoiding them. Stick in the 20’s age-group. Tight pussy, child bearing capacity and a chance to age gracefully together. Don’t buy worn-out goods with only a few years of shelf-life remaining before she becomes tired and beat-up like a sack of potatoes. Stop doing these confused over 30’s women a favour by validating their wrong choices.

Don’t be like Carol Radull’s ex-husband. The idiot of the century!

Attached: See the complete video where a basic Kenyan bitch, turned down a perfectly normal wedding proposal by running away.
Would you like to get published on this Popular Blog? You can now email Cyprian Nyakundi any breaking news, Exposes, story ideas, human interest articles or interesting videos on: [email protected] Videos and pictures can be sent to +254 710 280 973 on WhatsApp, Signal and Telegram.