The Kenyan government has embarrassed itself once again after an attempt to hoodwink Kenyans using a poll conducted by CNN miserably failed.

When celebrated business journalist Richard Quest visited Africa, he conducted a public poll on his show on “Which Economy Will Lead Africa In The Next 20 Years?” The most popular answers were Nigeria (which eventually won the poll), Kenya, Ethiopia and South Africa. 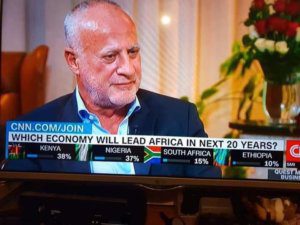 Uhuru Kenyatta’s online team hurriedly took screengrabs of the poll while Kenya was still leading and published them naming the World Bank as their source of these statistics. 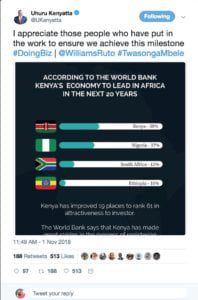 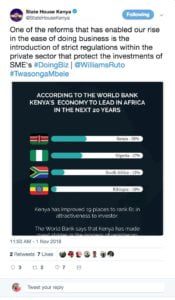 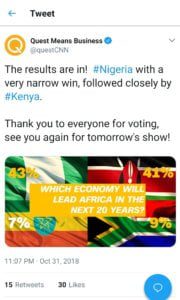 Caption: Quest Means Business tweets the final results of the poll where Kenya ended up finishing second after Nigeria.

It took the keen eye of Kenyans who had been following the show to call out the government for openly lying to Kenyans. This isn’t the first time Uhuru’s administration has been caught deliberately spreading false information through their online mercenaries popularly known as the 36 Bloggers.

In fact, in 2017 just a few months to the general elections, a website was purposely put up for maligning his main opponent Raila Odinga through false propaganda.

At a time when the administration is struggling and has lost confidence from Kenyans, pulling embarrassing stunts like these won’t help. Uhuru needs to man up and fix things or simply quit if the kitchen is too hot for him.